This is the second part of our two part series on the history of game monetisation. Each article can be read standalone, but for the whole story read Part 1 here!

The mobile game market truly burst onto the scene in 2008 with Apple’s App Store. Sure, there were some mobile games before that but widescale adoption really started when all the games were centralised to one store.

With mass adoption, monetisation once again needs to be figured out.

Around 80% of games on mobile were paid for in 2008, following the same model that consoles did. You were once again owning the experience, so paying once and never again makes sense, right? Not quite.

The reality of the mobile market is two-fold:

Without the audience willing to pay, the monetisation method had to be completely changed. Games still needed to be profitable though, so how can you earn money from a non-gamer who will play your game but isn’t ready to pay for it?

In-app purchases. Apple announced these in 2009, with in-app ads following soon after around 2010. Today, only 4% of apps on the Play Store are paid. People do overwhelmingly prefer ads to paying for content, BUT in the early days mobile game monetisation was like the Wild West. There were no best practices so games were plagued by annoying pop-ups, ugly banners, overpriced in-app purchases, and – in some cases – more ads than gameplay. Developers had to make a profit after all, and mobile games can still take many hundreds of hours to make,

Having both advertising and in-app purchases available was and is important throughout all of mobile gaming’s history. It lets developers diversify their monetisation and so make good money without making “Watching Ads Simulator 2014”.

Don’t get us wrong, in-app purchases aren’t just “another option” in this market considering that they’re now a $120 billion a year industry for Tier 1 developers. They are a force of their own. According to one report from 2018, in-app purchases make up a whopping 70% of revenue for midcore and strategy games, while it made up around just 45% of casual game revenue.

Tier 1 developers tend to be even more reliant on in-app purchases than that though, partly because they have the resources to design and implement an in-game economy to encourage in-app purchases. Despite that, only around 5% of users at most actually make purchases which has led to a trend of publishers seeking out and retaining these “whale” users.

Today, developers are between a rock and a hard place. Do they sink time and money into making in-app purchases and desperately seek out that small audience of high paying whales? Or do they use ads, which are much easier to implement but have a negative effect on retention? More on that second one in a minute.

But there’s a slow-burning twist to our story:

Mobile is now one of the most popular gaming platforms out there. 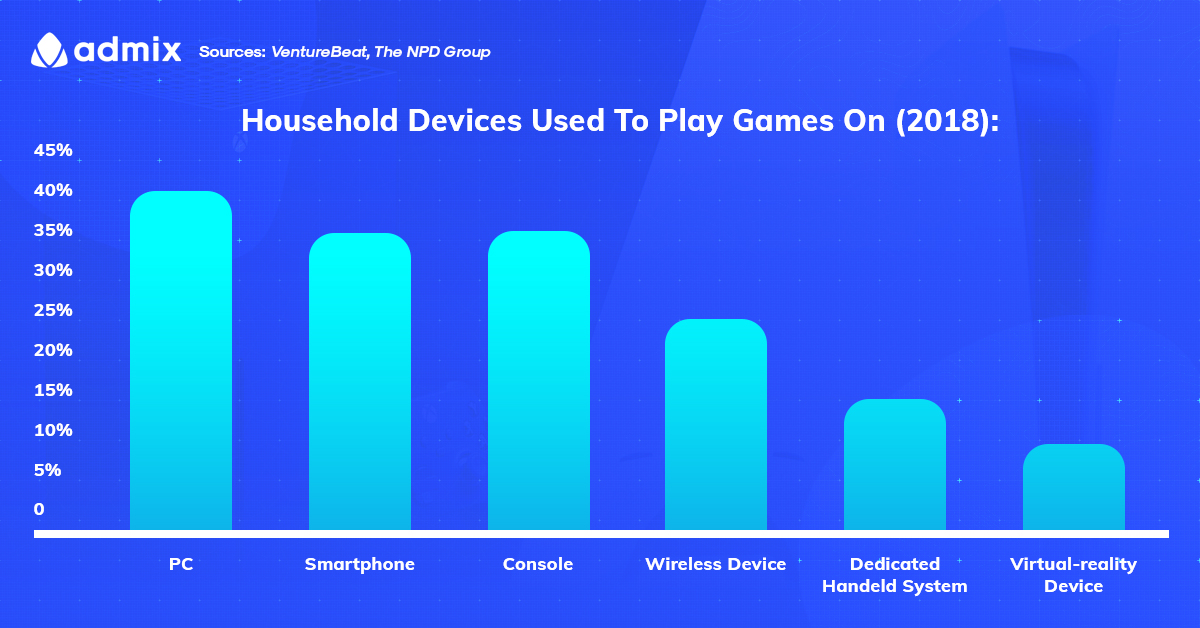 Why is that a twist? Well, mobile has pushed gaming into the absolute mainstream. There are now over 2 billion gamers in the world, and when the majority of those gamers are consuming addictively engaging mobile games above all else, there’s a huge amount of pressure on the games industry.

Firstly, there’s pressure to treat mobile gamers well. We are spoiled with choice so if you monetise in an intrusive way, gamers can and will switch to something else. Best practices were created, rewarded video became a popular ad format because it gives power to the player, and innovations are constantly happening to make ads even better. In-play ads are one of them, and are a truly non-intrusive alternative to the annoying ads that we’ve all experienced.

Secondly, mobile gaming has so much influence now that they are affecting the monetisation methods of AAA studios.

History is a circle

Before we reach the present day and while we’re on the mobile gaming scene, it’s worth talking about how history is repeating itself in terms of monetisation.

Arcade games were monetised per play, then games had a one off price, then mobile started pushing the in-app purchase and ads model. This model is similar to the arcade system because player spending follows a power law for them both: there are lots of people contributing a little money to the game through small purchases or ad views, then there are the small number of whales making HUGE purchases on the tail end.

A power law graph. The high amount of users making no or small purchases fall to the left, and the very very small number of players making regular large purchases (whales) fall in that long tail.

This business model enables publishers to extract the most value out of an individual player compared to everyone being charged the same amount, which arcades had already figured out 40 years ago!

And that model isn’t stopping at mobile…

The present of monetisation

Today, we are seeing mobile and console monetisation strategies merge. For years now, some of the most popular games around have worked on the freemium model that mobile popularised, and they are wildly successful because of it. A lower barrier to entry, bigger playerbases, and – eventually – highly engaged users happy to spend money. Just look at Fortnite – a free game outperforming almost every premium AAA title AND apparently boasting a 70% conversion rate. People WANT to put money into it, which is telling of fantastic monetisation design.

Speaking of Fortnite, we should also briefly touch on the battle pass monetisation tactic. Typically found in free-to-play games, it’s an in-app-purchase that essentially acts as a subscription. It lets you level up and earn rewards as you play, but you can still purchase other in-app content too. While this has been around for years now, Fortnite made it explode in popularity, and is another telling sign of the industry as we’re living it. Free content is king, but players still crave – and will pay for the chance to earn – progression.

League of Legends is also a personal highlight as a modernly monetised game. Not just because of their profitability through in-app purchases or their huge playerbase, but because they’re looking to the future…

The future of monetisation

This is the age of information, and the more information that publishers have about gamers the more business models adapt to their unique sub-profiles.

For example, most console players are considered ‘hardcore’ and so a premium model mostly still works there. Mobile players, meanwhile, range from hardcore to mid-core to hypercasual and each subset has different motivations and emotional triggers. A hypercasual gamer will give a publisher little value if they’re treated like a hardcore gamer and vice versa, so bespoke business solutions are necessary.

To look at the future of monetisation, we need to ask this: what are the players of the future going to look like?

Our prediction? Gaming is becoming more and more mainstream, attracting people that don’t consider themselves ‘gamers’ but just want to pass time and play something (the ‘accidental’ gamer). Therefore, an increasingly larger portion of the market won’t be willing to pay to play, which is why we believe that advertising will be more important than ever for the future of mobile games.

What about AAA games?

Advertising is such a huge success for mobile games that it’s inevitable for them to appear in AAA titles too. The issue has always been implementing them in a way that doesn’t make players hate your game.

All AAA games needed were an advertising format that worked, wasn’t annoying or disruptive, and that advertisers could get behind. As it turns out, advertisers are pretty thrilled about in-play ads and big game studios are getting on board too.

Which brings us back to League of Legends, who have recently announced that they’ll be using in-play ads during major esports events. You might have noticed that we haven’t mentioned VR and AR yet too, and that’s because their future is similar to AAA games except they’re just at the start of their monetisation journey. Currently, XR games are mostly paid experiences – but they’re often smaller in scope due to development challenges. We predict that the VR landscape will move similarly to mobile’s, and free content will be more commonplace and be supported by immersive in-play ads.

We might be biased, but we firmly believe that advertising will enter into games more and more over the coming years now that a good, user friendly solution is in place. There will be more freemium games, more gamers worldwide, and more pressure to monetise as many of those players as possible – even the ones who don’t purchase DLC.

It will be a profitable future for developers and advertisers and, more importantly, a future where the player experience comes first.

Everyone’s a gamer: where does hypercasual go next?