Everyone’s a gamer: where does hypercasual go next?

“Hypercasual” is still not a genre that appears on the Play Store or the App Store, and games in this genre usually come under the “Arcade” category. Even without this recognition though, it’s a behemoth of a gaming niche.

Boasting over 5 times more traffic than the next closest genre (167 million sessions a year compared to casual’s 43 million), responsible for almost 80% of game download growth between 2019 and 2020 alone, and being valued at a huge $3 billion a year. Hypercasual is clearly doing something very, very right and has powered publishers like Voodoo, Boombit and Madbox to rise to high valuation is a very short amount if time. 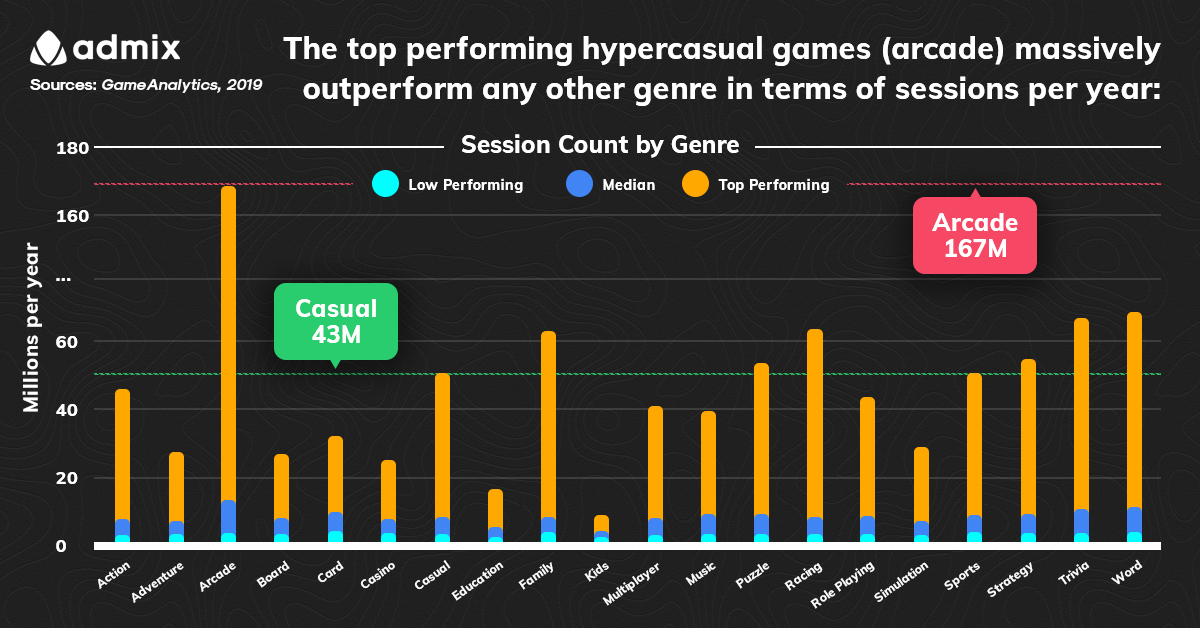 But is everything as peachy as it seems?

It is true that hypercasual has an immense playerbase, with installs peaking at around 1.8 billion a quarter in 2019. Is growth going to hit a ceiling then? Is this the start of the end of a genre?

It is certainly true that growth is falling (even though it’s still incredibly high), so what’s happening.

Image courtesy of Deconstructor Of Fun

To understand the rise, fall, and future of this titan of a genre, we need to start at the beginning.

Why are hypercasual games so darn addictive?

The answer to this question is exactly in how the Play Store categorises the genre: Arcade.

The first games created existed only in machines as big as your fridge, they had simple visual design with lots of colour, had an almost flat learning curve, and a gameplay loop that made you say “one more time” every time. They were addictive, and all the design learnings from the arcade generation are being used in mobile gaming today.

In the days of arcades, you had to really commit to playing those games though. You had to go somewhere, pay money, sometimes wait in line… You had to go out of your way, so no matter how much mass appeal they could have had, they were inherently limited. Today, these games are free, they’re in your pocket, you can pick them up instantly so there’s no barrier to entry, and they’re so easy to make and generate so much money that there’s always another being made to grab your attention next.

And on top of that, hypercasual games are designed to make you feel good fast. Simple controls, the offer of high scores, the promise of another high score in your near future if you keep playing… They are built to hack into the motivational structure of your brain by making you feel competent, and good, which is why so many people are turning to them when they have a spare five minutes. 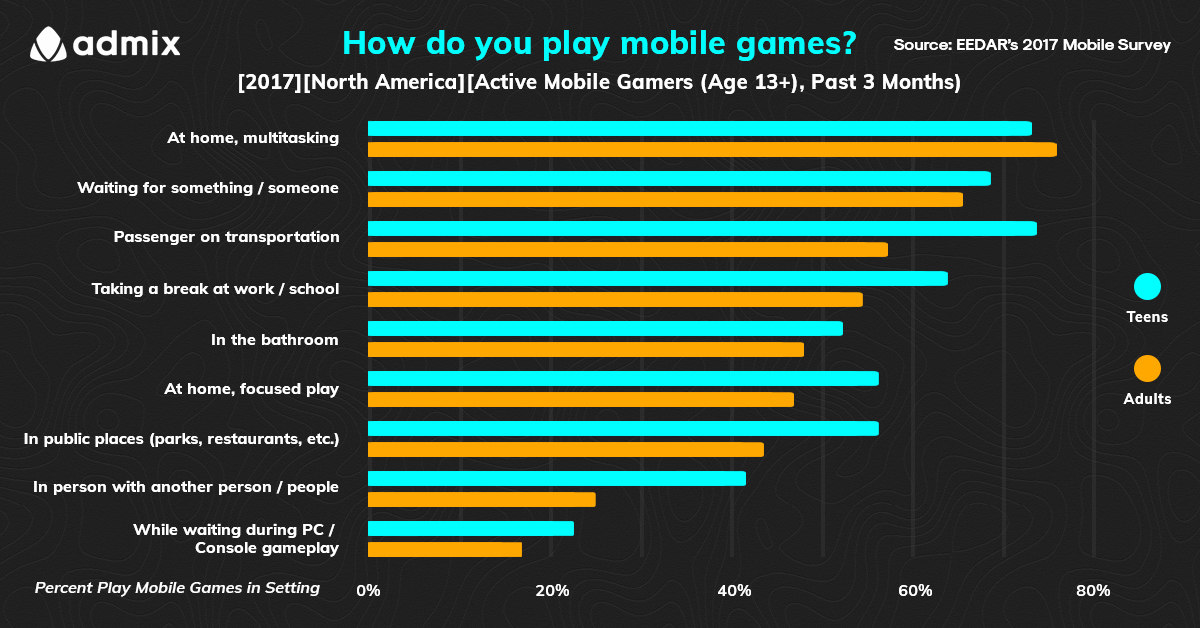 Hypercasual games, in their psychological addictiveness and vibrant art, appeal to non-gamers and are a core reason that gaming has become so mainstream now. There are over 660 million hypercasual players after all, making up a big chunk of the over 2 billion gamers worldwide.

But now that we’re seeing stagnant growth after publishers have tapped out their addressable market (as we showed up top), what’s next for the genre? How do they recover?

The unit economics of hypercasual games

To better understand where hypercasual is and where it’s going, we need to look at the business model on a per-unit basis.

Basically this only works if the cost of acquiring that user is less than $0.2, but the average cost per install (CPI) for mobile in general is $2.37! So Hypercasual had to crack cheap acquisition to make their unit economics work.

This is where the true genius of hypercasual’s business model comes into play. Because their userbase is so broad, their advertising doesn’t need to be heavily targeted. Facebook and Google charges relative to how specific your audiences are, so hypercasual publishers can run cheap advertising campaigns AND still get immense user acquisition.

Finding cheap traffic and incentivising people to download the game through optimised ad creatives and audience retargeting is more important than gameplay and retention. When the user is in, that user is generating profit.

One big tactic for acquiring users in this scene are effective, if fraudulent, adverts where they show completely irrelevant gameplay to entice users. It casts a very wide net and catches a lot of attention.

With a majority of budget going into marketing, and money saved by not spending on development or extending content, as soon as a player IS acquired and sees that first load of ads they are already profitable.

It’s basically the opposite of mid core games, where retention and lifetime value (LTV) is high. MachineZone is the master of this, with the average paying player of Game of War: Fire Age spending around $550 compared to the industry average of $86.50. These studios can easily afford very expensive user acquisition! The true future of hypercasual

They’re competing with social media. And any other short form distraction that fills our daily breaks.

Social media is something you dip into when you have some spare time, mindlessly scroll and absorb, then switch off. Hypercasual games target the exact same user behaviour, and yet social media platforms retain users for years upon years while a hypercasual game is lucky to get past a week.

So, more than ‘a love for the game’, hypercasual success is predicated on ad creative optimisation, audience targeting, and cross promotion. Effectively they have cracked game marketability 10x better than any other genres before (think hypercasual’s average cost per install being ~$0.20 compared to the global average of $2.37) and have done a phenomenal job of acquiring massive userbases.

Where can hypercasual go from here?

To find a new avenue for growth, the HC market has 3 options that we’ll go through 1 by 1. The first?

Hypercasual games are still ‘games’. The learning curve isn’t literally a flat line, you often still need to solve puzzles or have good timing, and you can lose. An ultracasual (term coined by Home Games) or idle game fixes all of those pitfalls. No ability to lose, even simpler gameplay – like a colouring book app – where timing or problem solving isn’t necessary, and appealing graphics to get users on board. But, this is only pushing the problem further. What happens when the ultracasual audience is exhausted?

Well that takes us to the second route…

What if hypercasual games were able to acquire users cheaply, and resell them at 5x the price to casual game devs?

So with this option being a good one for long term survival of the genre, it’s time to discuss the third option:

The rising term for what this new genre will be is hybridcasual (term coined by Deconstructor of Fun).

That essentially translates to a game having a hypercasual core game loop and concept (simple controls, reinforcement mechanisms like high scores, appealing graphics, etc.), but a midcore-esque metagame on top of it. In other words, they’ll pull players in with simple gameplay, and hook them with surprising RPG-like mechanics.

Archero is a game that does this extremely well, with the only control being to move a character yet a deep RPG system leading you further into the game. This hybridisation also allows it to earn a chunk of the 12% market revenue of RPG games on mobile by sharing that midcore audience.

This will enable hypercasual games to keep users longer in one game, and capture more value with in-app purchases from their whales (the smaller percentage of players who spend a lot) while monetising the rest with advertising.

We predict that this trend will continue over the coming years now that the rapid-growth period is ending. Publishers will soon be looking to keep players invested in an eco-system and monetise them through a mix of ads and in-app purchases. After all, if a user is investing long term time into a game, they’re more likely to invest money – or at least that seems to be the case with Fortnite’s incredible 70% conversion rate.

In all likelihood, the business side of this will take a best-of-both-worlds approach too. Deeper games are harder to develop, so studios will likely keep making hypercasual games with shallow meta games in order to find the one that becomes viral enough to invest larger resources into.

So we can expect some studio acquisitions here in order to merge marketability and game design skills!

Regardless, it’s time for hypercasual games to shake off their arcade roots and embrace the addictive complexity of modern games.

Header image from this great article on the AppLovin Blog.