A few weeks ago we released this list of 5 psychology tricks that games use to make you spend money. This week, we’re topping it off with another 5!

At the end of the day, the business model of many free-to-play games is – as it is with any business – to make a profit. And to make a BIG profit. The pursuit of that can sometimes lead to exploiting basic human psychology in order to push for more ad revenue, or more in-app purchase sales.

Not all of these tricks are bad or designed to exploit, and it always comes down to the developers and publishers as to how far they go with them. Our advice is always to put your players first and play the long game instead of always seeking immediate revenue, but enough chatting – let’s look into the psychology!

We spoke about this one in depth in our idle games article because idle games are a perfect definition for the term.

Skinner boxes are (much to his annoyance) named after psychologist B. F. Skinner. He was researching behavioural conditioning, which is how you reinforce a behaviour psychologically. He placed rats in a box with a switch and, when the rat pressed the switch, food would appear. The rats started to associate the switch with the food and would just keep pressing it even if the food stopped arriving or just appeared randomly. The rats were addicted.

Games that reward players for repetitive actions are called Skinner boxes because they enforce a behaviour that quickly spirals into addiction, or mindless action. Think slot machines in a casino. Idle games do this through repetitive action (tapping), but many games do this through reward boxes or gachas. The player might often get awful rewards, but the occasional draw of something good keeps them going – even if they no longer find it fun.

This is a form of behavioural addiction that everyone gets struck by at some point. Whether it’s loot boxes, random loot drops, or many daily reward systems. 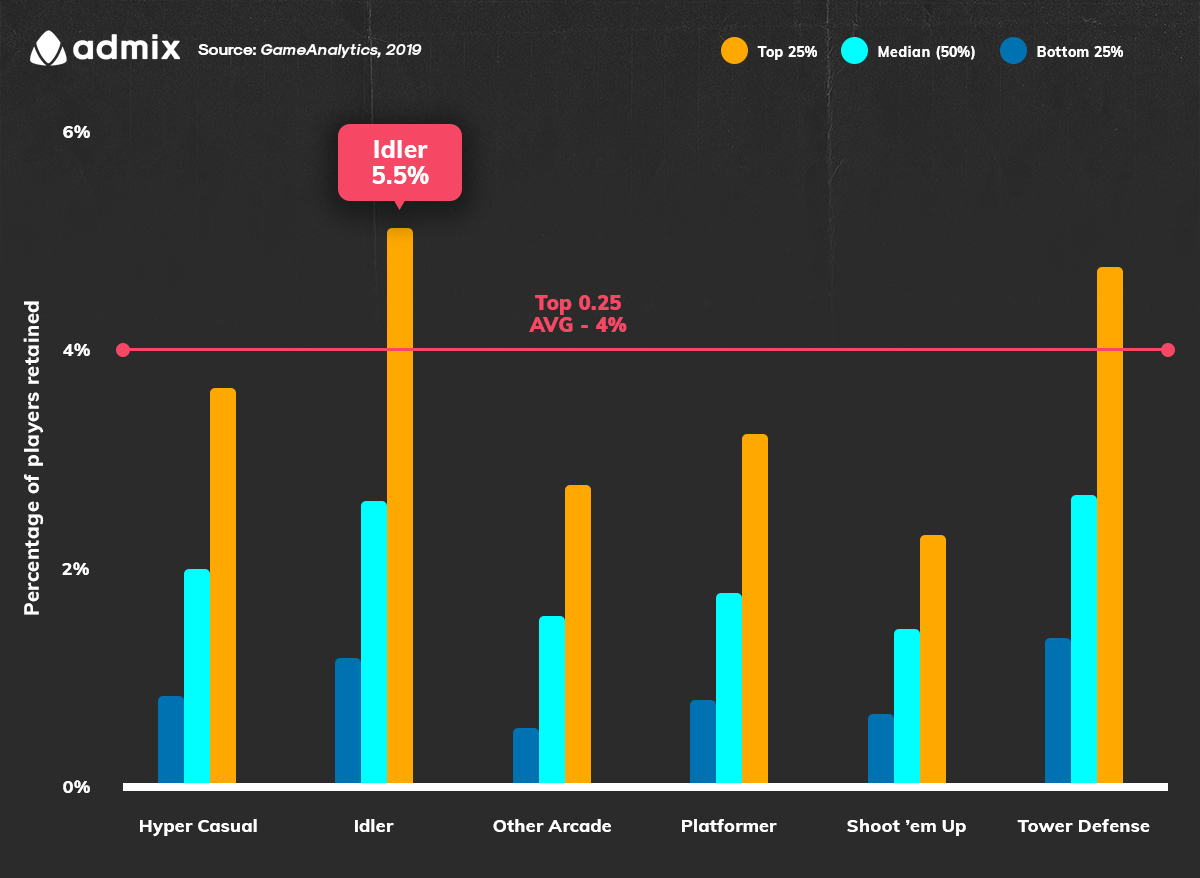 This comes from the idea that humans don’t make rational choices based on an objective summary of potential results. Our judgement is often clouded by what came before it, and especially by how much time we’ve already invested.

For example, imagine we’re playing a game where you flip a coin and guess heads or tails for each flip. To your amazement, you get 8 heads in a row – what do you expect the next flip to be? Most people would say tails, especially if getting a tails would mean you win – you’re overdue for it, right? In reality, the chance of flipping heads or tails will always be 50/50.

If you have been super committed to a game that you really struggled to quit, this is probably what was stopping you. World of Warcraft players with many characters and hundreds of hours committed won’t want to stop and lose all of that, even if playing the game is causing problems elsewhere in their life. If you’re saying that this just sounds like loss aversion with more steps, you’d be right.

The entire concept of Candy Crush Saga was essentially based on this principle, easing players into a few levels until they’re so far in that stopping would suggest they wasted that time. Candy Crush wasn’t even the first saga game that King tested as they went through a series of rapid game prototyping to see which would be the most financially viable. The saga model of continual progression was lifted from a game called Bubble Witch Saga and applied to Candy Crush, which only existed as a successful web game at the time. The incredible engagement of Candy Crush Saga flung King into the billion dollar company it is today.

And a final note on the power of the sunk cost fallacy, it’s often one of the self reported reasons that whales end up spending so much time and money on a game. Read a report of that here.

In short, humans can’t help but place greater value on an object when there’s not much of it left, and they think of things that there are many of as lower in value. Emeralds, for example, are considered valuable purely because there aren’t as many of them.

There are a couple of factors in play that create this phenomenon:

First is social proof – if an object is in low stock or almost gone, it must mean that it’s popular which must mean that it’s good. In games, where the objects are infinite because they’re digital, this is emphasized through “back by popular demand for a limited time” sales.

The next is our good friend loss aversion. To miss out on a deal would be to lose something, and we’ve discussed how much we hate loss in depth in our previous psychological tricks article.

The most common use of scarcity you see in free-to-play games is limited time deals, not only making you want the deal before it runs out but urging you to make a rash and unplanned decision. An impulsive purchase is still revenue to the publisher, after all. 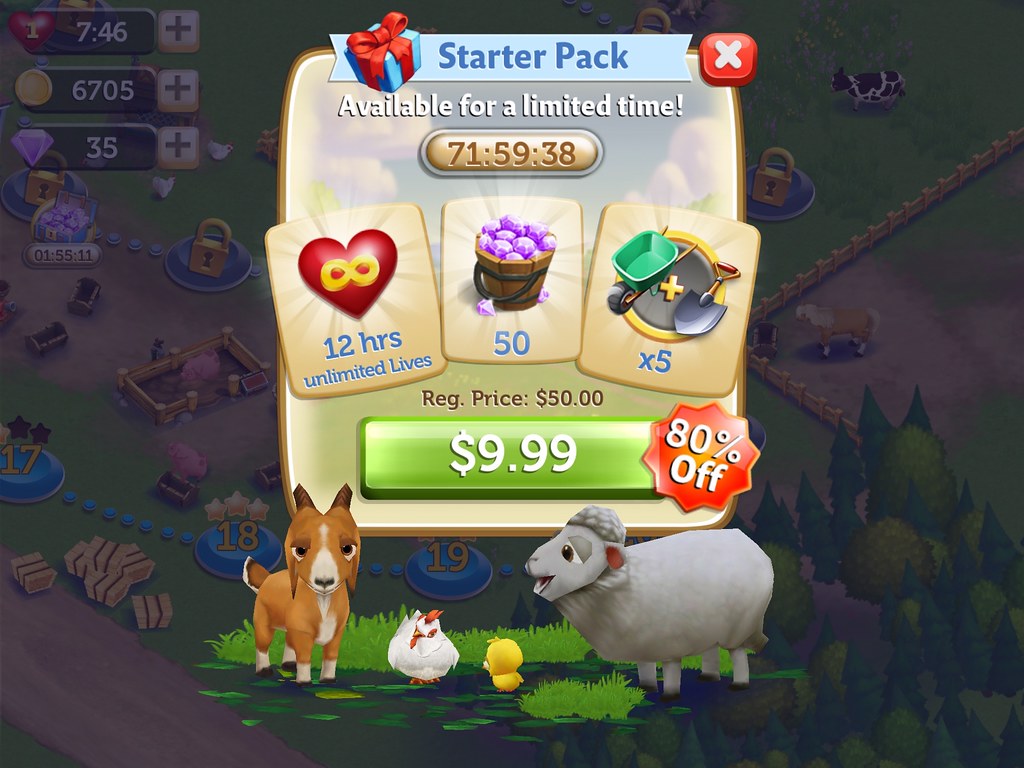 Roger Dickey of Zynga created this term to describe a situation where a player is put in a situation they don’t enjoy and given the option of buying something to solve the problem. It’s a broader term than loss aversion, and specifically refers to the act of adding in these pain points in order to monetise them.

In idle games like Tap Titans, putting the next stage of progression in the late game just far enough away to be annoying is an example. A simple in-app purchase will remove that pain. Or how about a level that just seems impossible and, oh man, the levels where the game gave you that one power up were so much easier. If you just buy one, you’re set.

Zynga made nearly a billion dollars in their first 4 years, so it’s clear that intentionally frustrating design can turn a huge profit if used well. The next time you’re playing a game and you’re tempted to spend money to make a problem go away though, remember that that might have been by design all along…

This one is quite specific to battle passes, especially ones like Fortnite’s where you have daily quests that you can track your progress towards completing.

The idea of endowed progress is to try and get your user to feel committed to a game or a task as a way of massively boosting retention and, ultimately, converting them to a paying user over time. How to do it is incredibly simple:

Make it seem like they’ve already made some progress towards the goal.

Humans tend to want to finish things that they’ve started because it creates a sense of psychological attachment or commitment. Developers can exploit that psychological need for completion by giving players free progress. Design wise this is exemplified by progress bars or reminders that you are almost there – but not quite.

In Fortnite, for example, it’s very very easy to make progress towards a quest that you didn’t even know existed. And as you’ve started the quest, might as well finish it by playing another game or two, right? 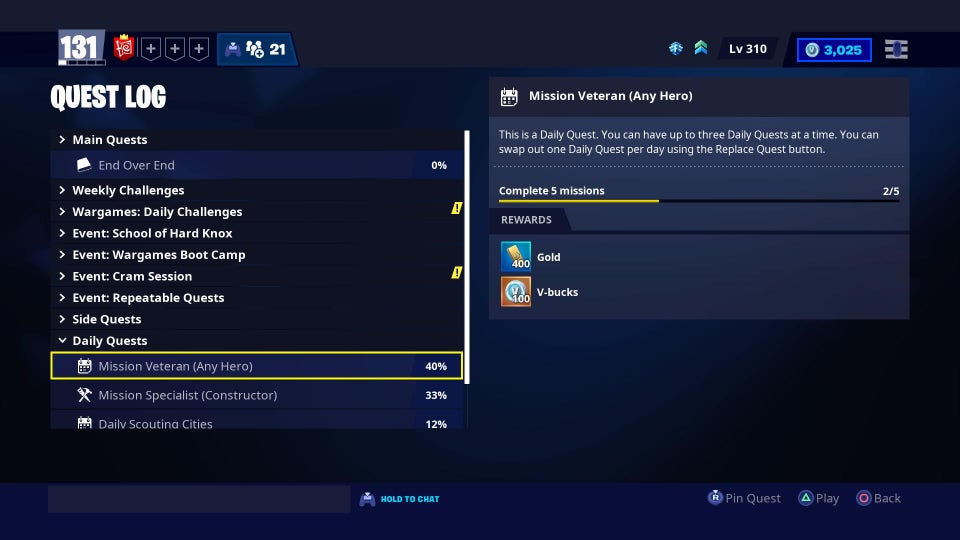 You could even imagine a game in which some daily quests are secretly generated based on what the player did in the game that day. It’s a little immoral, but it’s certainly a way of amplifying engagement…

As we said in our previous psychological tricks article, these are all powerful tools to boost monetisation but they really do require two things:

1 – Moderation. Any player that feels exploited or pushed to their limits with frustration will simply switch off and stop playing.

2 – Quality. If your game isn’t fun to play to start with, then using these tricks either won’t work, or will put players off.

At the end of the day, always put your players’ needs first in monetisation design. These tricks can help boost engagement or revenue, but making a great game will always be the biggest boost you can get.

Sam and Ian chat through these tricks on Giving The Game Away?

Gaming News – Among Us, Rocket League, Apple, and Oculus!