What is In-Play advertising?

In-Play is Admix’s homegrown and lovingly crafted advertising solution, placing ads programmatically inside of game scenes in a non-intrusive way.

Here are some key features of In-Play: 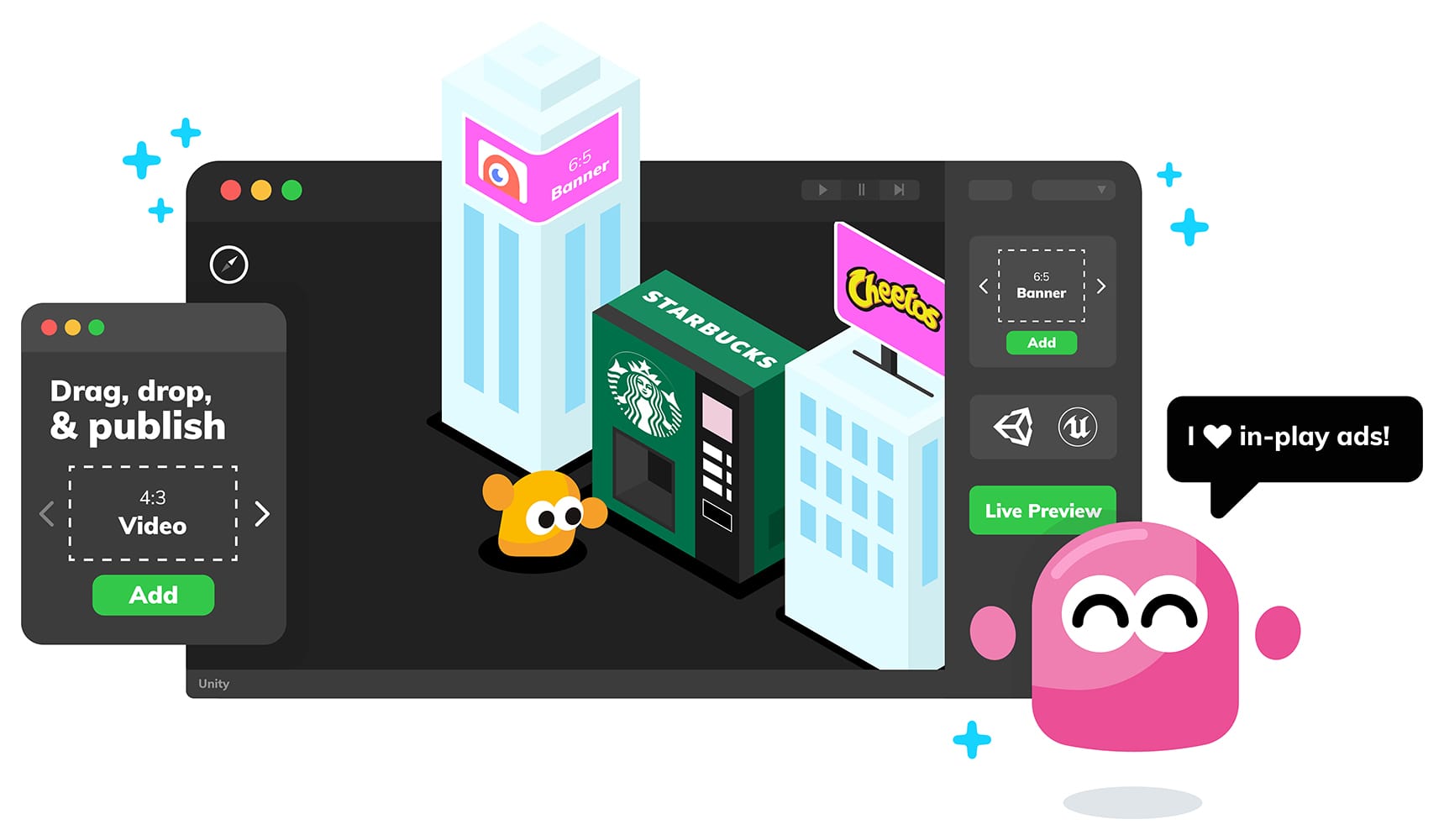 A few years ago, Admix was founded as a response to advertising run amok. The mobile landscape was full of intrusive ads that did the worst thing you could do in a game: distract from or stop people playing it.

But what we saw was the bigger challenge: both players and developers just didn’t have a better option. It was either make your game a premium purchase and have a much lower chance of success, uses no ads and struggle as a studio, or use the ads available and worry about user experience.

We knew there was a solution that benefited everyone, and – when we started  – there was an early version of that solution out there: in-game ads. We’ll do a full write-up on the differences in its own article, but in-game had the major weakness of a high barrier to entry. They’re almost always hardcoded, so they’re definitely IN the GAME but don’t allow publishers to tweak, optimize, or even implement ads easily.

Our In-Play format is designed to be fast to allow devs to focus on game design, programmatic to give a much higher opportunity for profit, and customizable with deforms, shaders, and lighting so that they can be made a real part of the game, instead of a distraction from it.

And not only is it a win for players and devs, but advertisers are also pretty happy too. In-Play ads are highly visible but don’t have the negative stigma of other ad types. The last thing an advertiser wants is for a player to say “ugh, just let me back in the game” when their product is shown.

In-Play has three ad formats that devs can use: 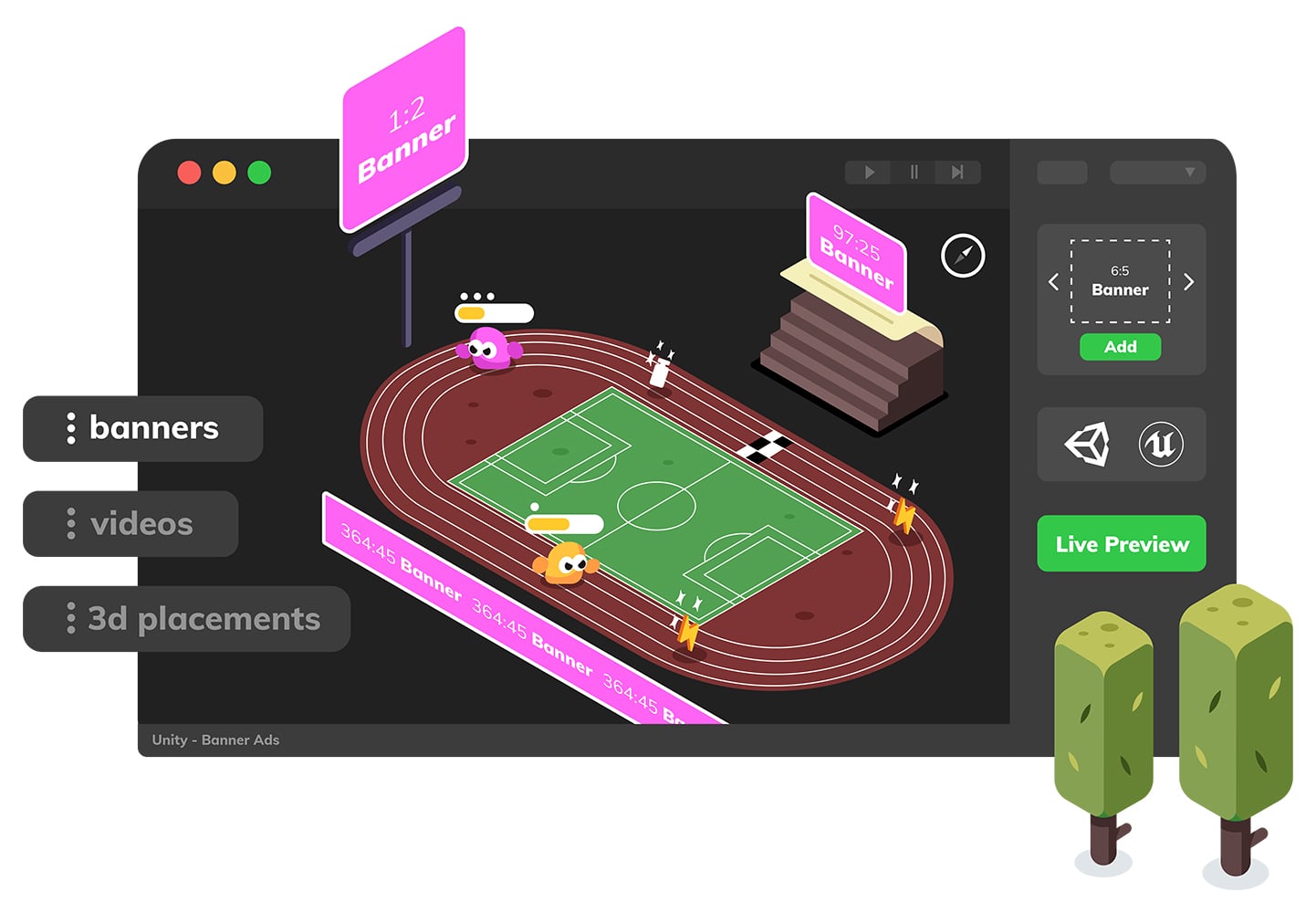 Banners, but not as you know them.

This is our still image ad format and is incredibly versatile. It’s our most used format by a mile because it’s easy and fast to place several banners in a scene, and just as easy to apply shaders or lighting to them if you need it.

It’s ads like this that players report as adding realism to a scene, and they provide great revenue because of how many you can use in your game without them being intrusive. In fact, 60% of our users qualify them as ‘sponsorship’ more than ‘ads’ – proof that ads that don’t interrupt create a very different user experience.

And the icing on the cake? An incredibly small footprint (100Kb max), so your app isn’t being dragged down in performance by its monetization method on older devices. 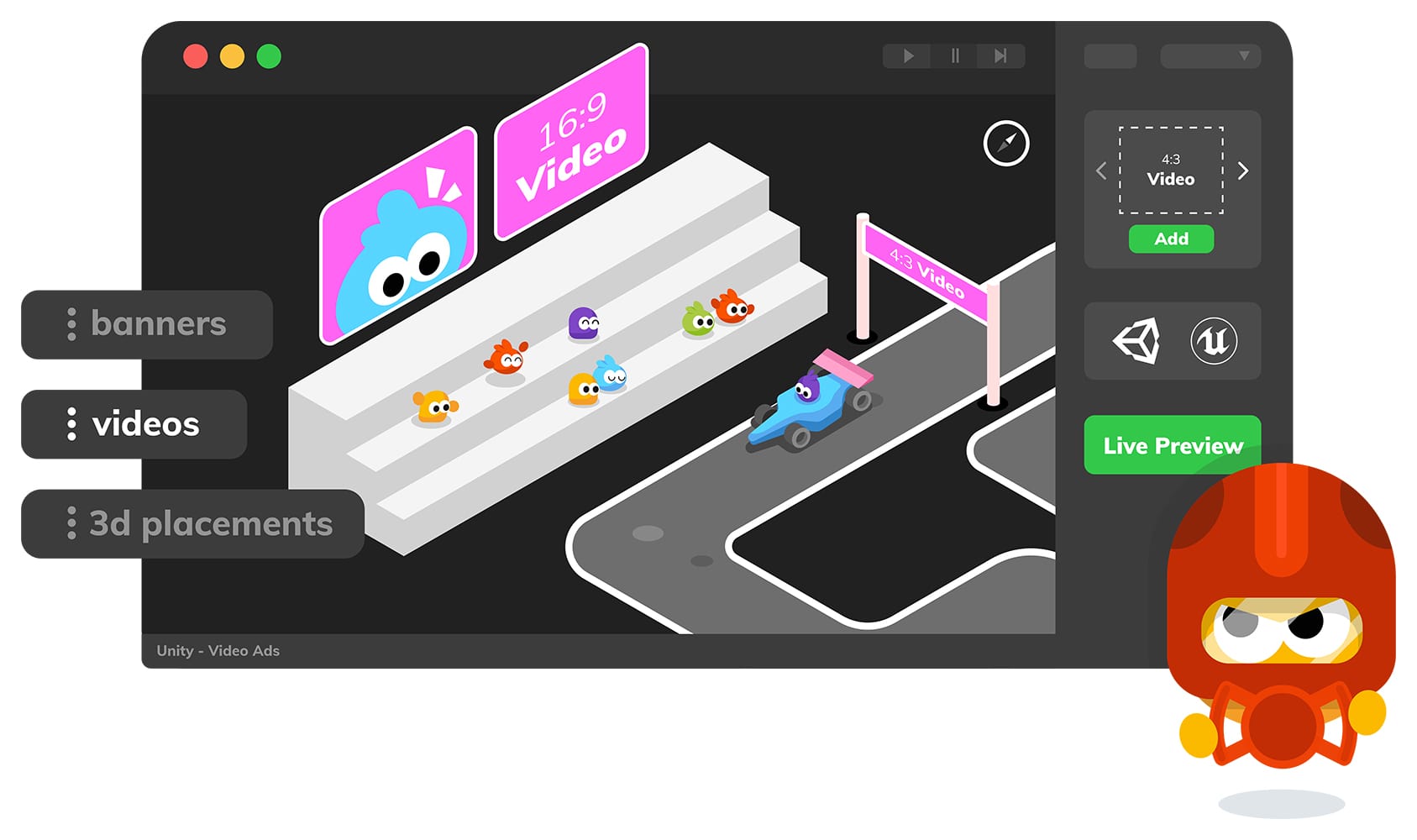 As you can imagine, these have all the customization benefits of our banner ads but with the high revenue potential of traditional video advertising.

These video ads tend to be 6s to 10s long (optimized for social), and they start auto-playing when they enter the player’s field of view. The longer the ad plays, the more revenue you’ll make, so they’re great for high visibility areas like football stadium screens as one example.

They also support full 3D audio if you want to draw just that little bit more attention to the ad as the user gets closer.

Don’t get us wrong, this is a slightly trickier ad format to place within a scene but the rewards from doing so can be fantastic. Often up to 5x higher CPM levels of fantastic. 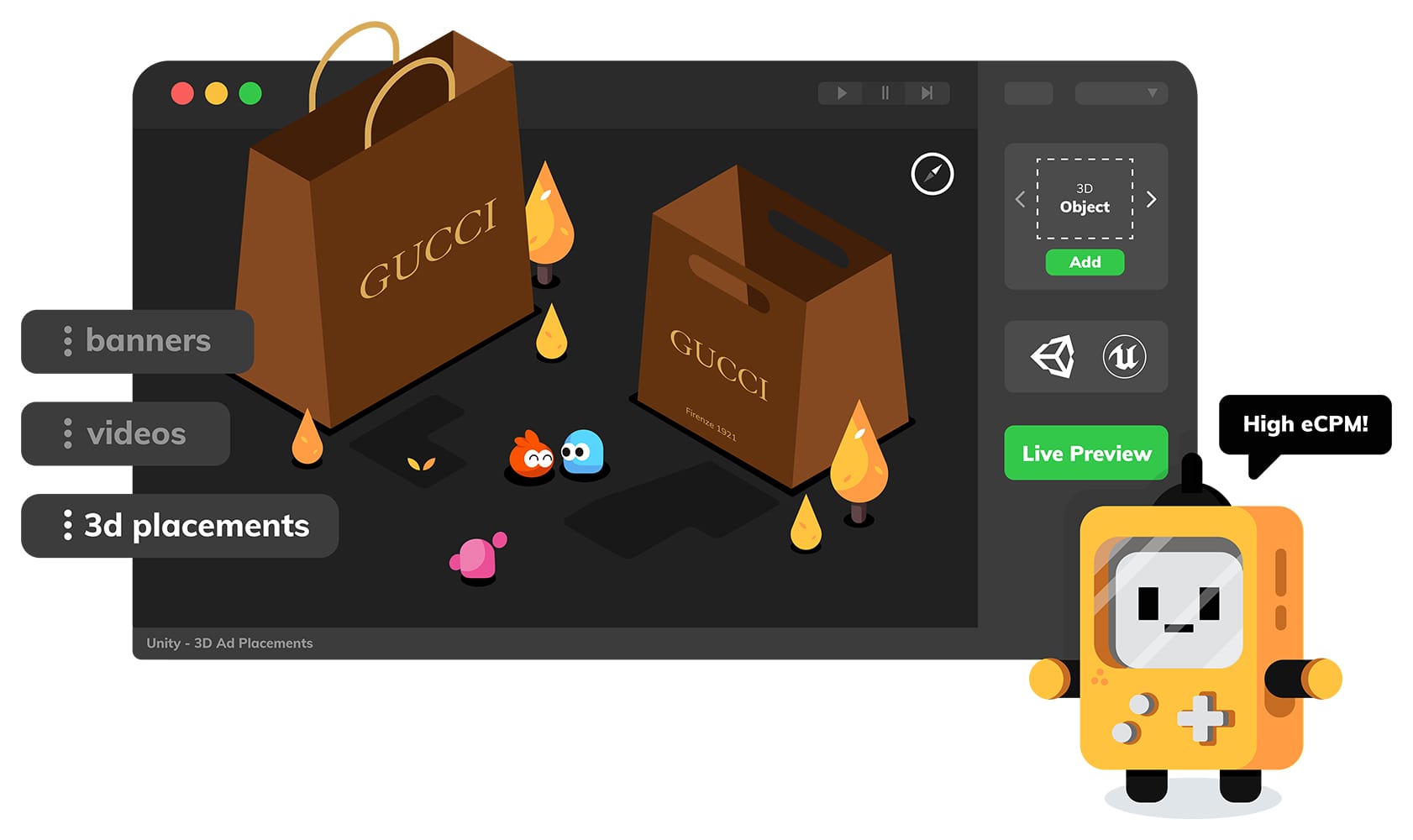 As the creators of these ad formats, we really shouldn’t have a favorite… But we do, and virtual goods are that favorite. Or at least will be – these are currently in development but we’re confident that they’ll be a game-changer.

These are actual branded products that you can place in your game scene to generate revenue. Almost like product placements in films, except interactive and so much cooler. For example, apparel that your avatar can wear, or branded accessories they can use in-game to progress faster.

This is a completely native format, blended within the game world. It’s still in its early days, but brands will soon be able to add animations to branded objects to enhance the experience even further and attract even more brands to the format.

Watch this space closely to be an early adopter of the advertising of tomorrow!

We are a dev and player-focused solution that (luckily) advertisers love. As such, we put ease-of-use, retention gained by happy players, and revenue for devs first.

That’s why our plugin is drag-and-drop, why we put so much work into optimizing our tech to keep it effective and non-intrusive, and why we’ve developed a handy analytics dashboard for devs to track and improve their revenue.

It’s also why we introduced a 14-day standard payment term compared to the industry standard of 90 days. Why should devs wait to get paid for their hard work?

We can talk about our passion for the industry and the work that we do endlessly, so please get in touch! Contact us here, or jump straight to downloading the plugin here.