The psychology of action games, and how to monetise from it

We are firm believers in the idea of knowing your player base. After all, if you know what makes them tick and what motivates them then you can optimise your game to what they find fun. You can also avoid monetisation strategies that they’ll find especially annoying and cause them to churn away, so it’s a win-win in every sense.

We’ve spoken about motivation and games a fair bit in the past, covering a few different design areas. We spoke about player taste and what makes a user pick up your game, and about how to design your game to keep players interested and engaged.

Action games are an interesting beast of their own though. The playerbase are fairly unique in what keeps them playing, and they’re surprisingly similar to hypercasual users with some key differences.

Let’s dig into that.

Action gamers: what engages them

It’s not unreasonable to compare action games to hypercasual games in terms of data. For example, their retention rates aren’t much to write home about – most likely because of the rapid pace of gameplay. Action actually has a slightly lower overall retention rate than hypercasual, which makes keeping these players invested all the more important. 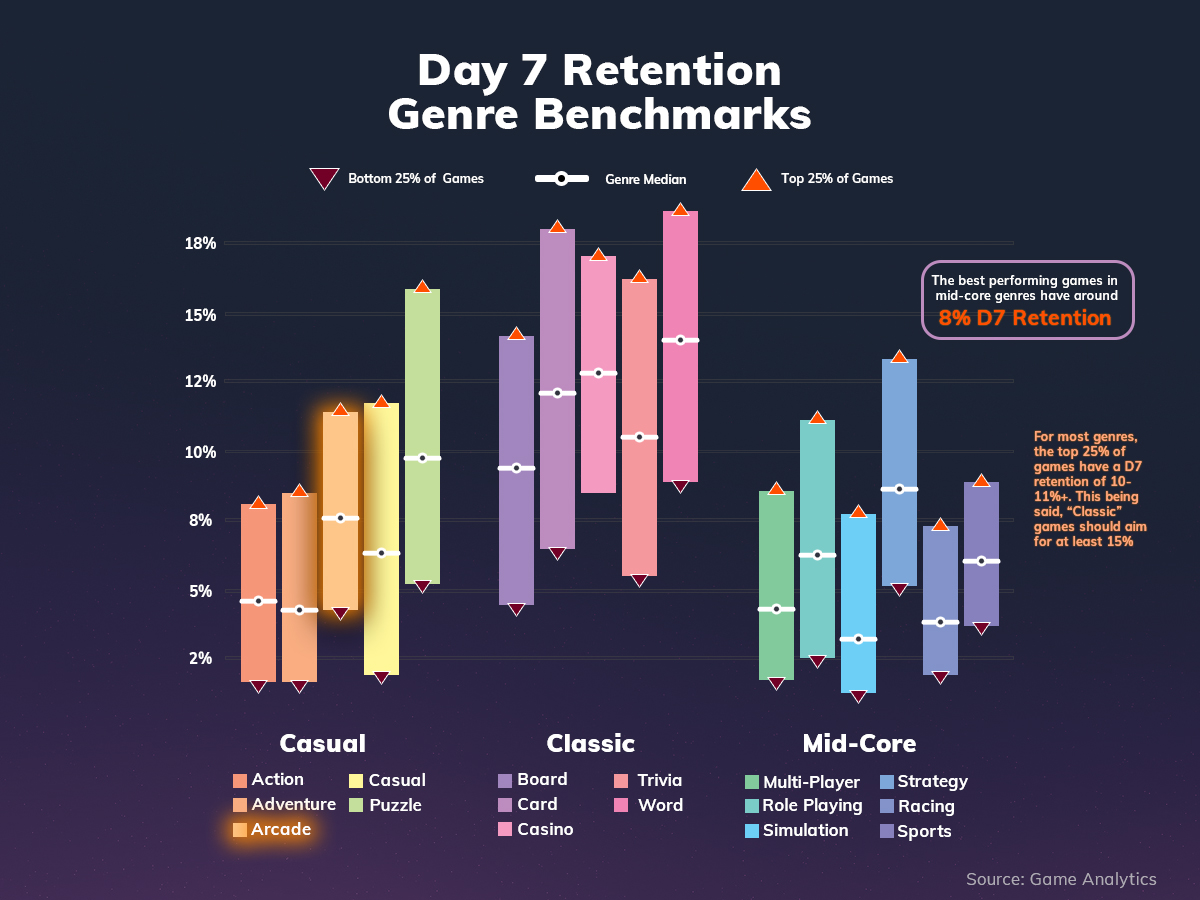 Plus, session times are actually on average shorter than hypercasual games too. 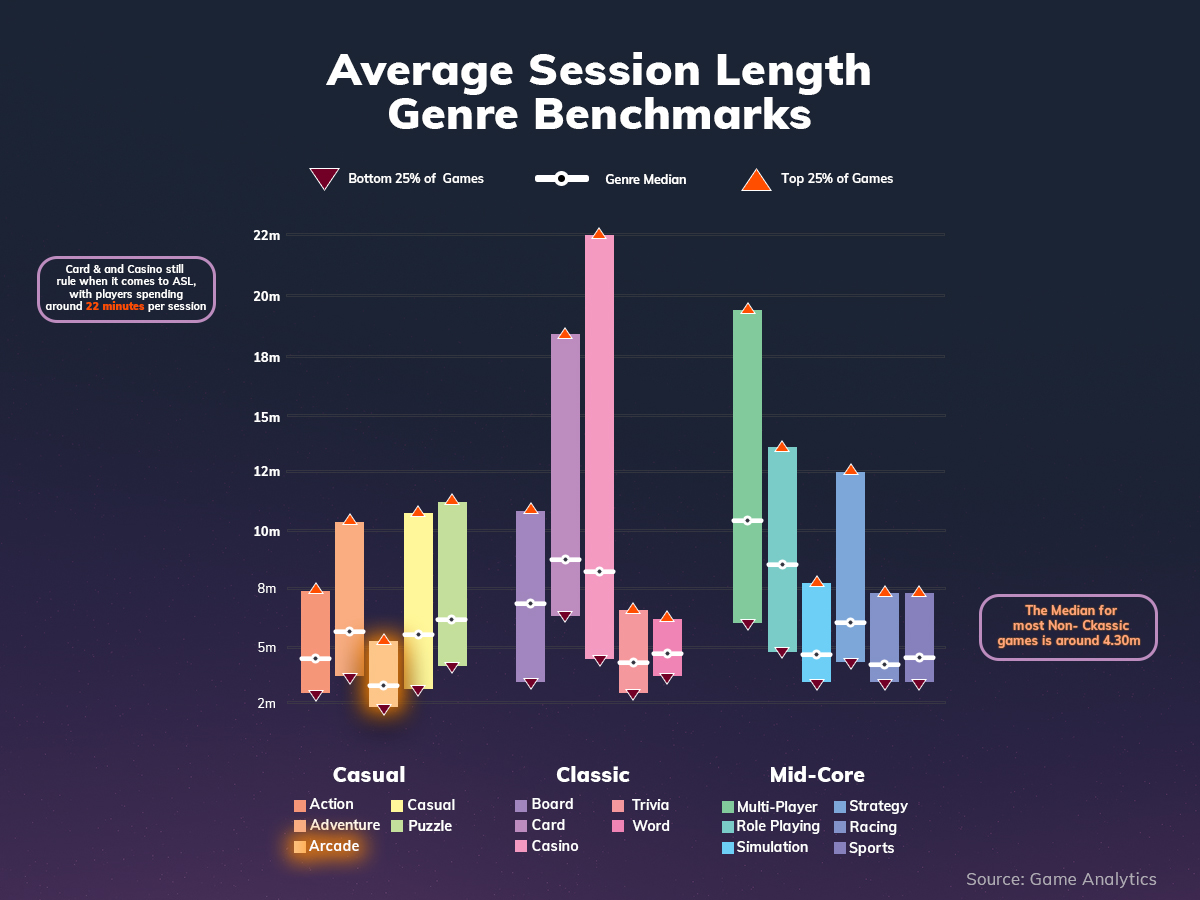 These trends reflect the nature of action games themselves: fast paced and high octane. Action game players want to experience these games quickly, exploring content and competing with other players in the short moments they have between life commitments.

Similar to hypercasual games then, these players are motivated by the immense stress relief that action games give them in their busy lives. Amazingly, there is some evidence that this genre in turn improves their cognitive abilities.

Overall it paints a picture of a user who engages heavily, are passionate about what they play, but who switches games quickly as they chase the high of action. Needless to say, it’s a challenging genre to work within and an important one to monetise correctly. After all, with retention like this it’s a scary balance between advertising too much and alienating your audience or advertising too little and making profits razor thin.

Monetising correctly is as much about core game design (increasing engagement and retention as much as possible), as it is about monetisation methods (ad types). We’re going to cover both here now.

Again, we want to focus this on psychology and give some more broad advice, because action games are a pretty wide category.

The biggest aspect of action gamers to talk about here is their love of self-improvement. Of challenge. Of overcoming their own skill levels, and that means we’re talking about difficulty curves.

And what is a difficulty curve trying to do? Keep players in a flow state as long as possible, because when you’re in flow time just slips by (and retention slips… up?).

A psychologist going by the name of Mihaly Csikszentmihalyi experimentally evaluated flow and visually represented it as follows: 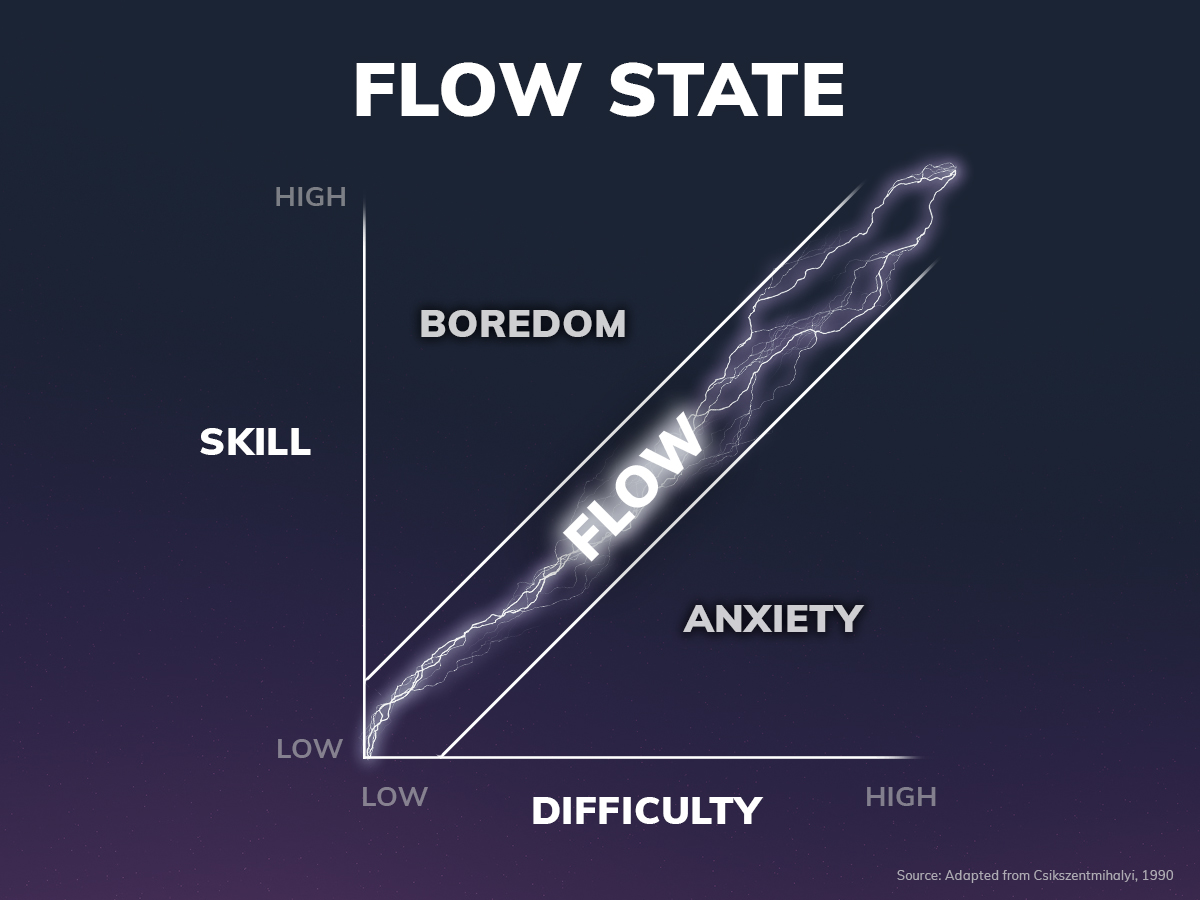 Luckily Csikszentmihalyi also outlined four common traits that tasks that push a person into the flow state have in common:

Going through these by framing them as an imaginary Temple Run-esque endless runner, we can start to see how retention can be boosted to improve revenue and player fun.

This one’s easy for the game we’ve chosen to make: keep running forward and avoiding obstacles.

Refining this flow requirement comes down to age-old game design elements that a million other blogs have already covered, from creating varied obstacles, to making obstacles visibly distinctive, to giving players enough time to react.

Now it’s time to talk about our difficulty curve.

Our favourite piece of writing on this is on David Strachan’s blog, in which he proposes the ‘difficulty saw’: 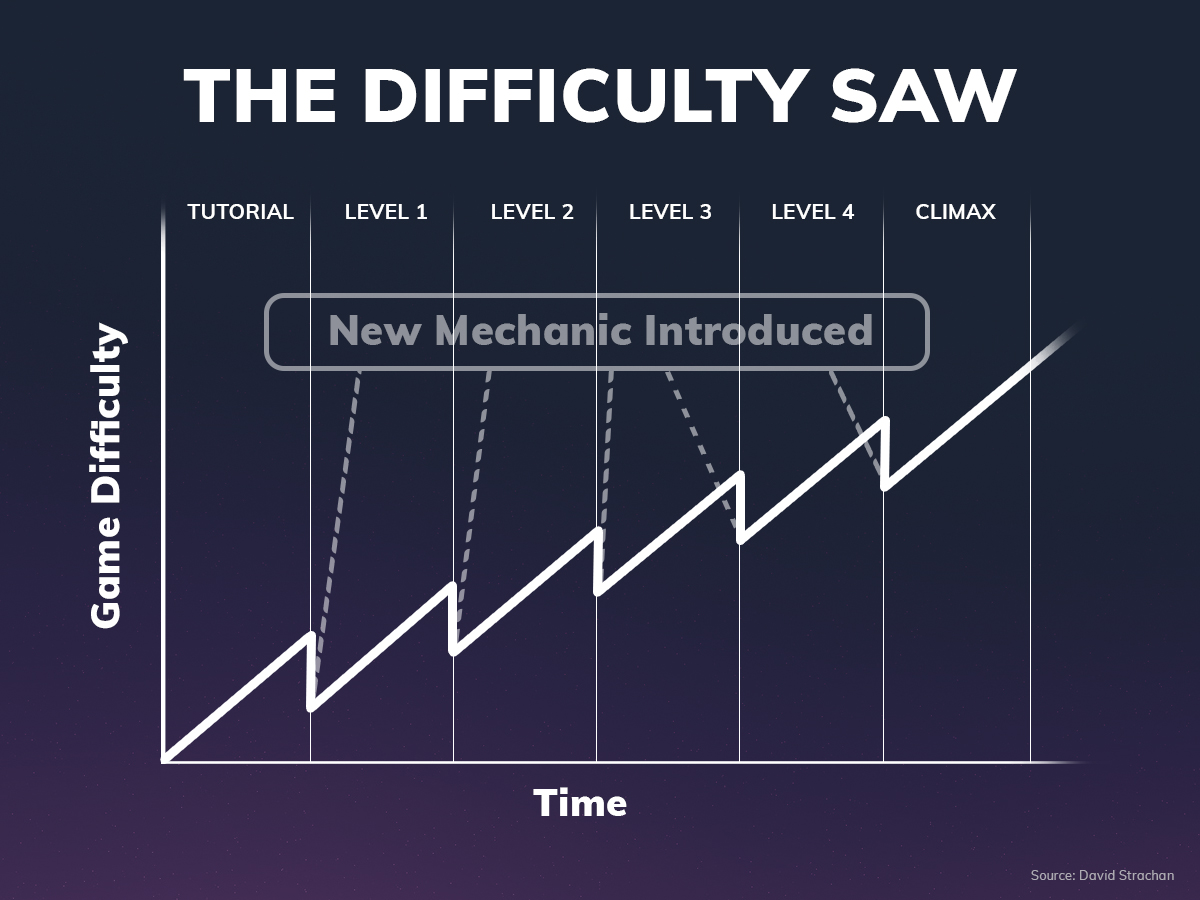 This approach removes the linear difficulty progression that you normally expect with a curve and appeals to action gamer’s love of discovery and new experiences. Just as the player thinks they’re mastering the initial obstacles, a whole new mechanic is brought in (difficulty is dropped slightly) and suddenly it’s like a whole new game. A whole new challenge to overcome.

Relating that back to our fantasy endless runner, let’s imagine that we include a biome system. After, say, 60 seconds of dodging obstacles the player gets a choice of two routes. Go right into one biome, go left into another. Occasionally there might be hidden side paths that take some careful maneuvering to get to.

Each new biome has new obstacles and enemies that are harder to dodge the further in the game they are. To keep players in an area appropriate for their ability, we can add collectible coins that eventually let you buy keys to these areas, or – as we said above – we make getting to that biome a challenge to overcome in itself.

The player has to feel like they’re making progress. The distance they’ve run has to be clearly signalled and achievements celebrating distance milestones should be given.

Purchasable power-ups should be added that can be brought with collected coins, and skilled dodges or close calls should be rewarded with coins or just a pop-up to encourage a high-skill metagame for players to aim for.

If the player is in the game, they’re probably invested and focused.

But the biggest distraction you could give to these players is an interstitial ad, which brings us onto…

The enemy of flow is interruption. Breaking flow means breaking fun, and that means low retention. In a lot of other games, interstitials aren’t as painful as they are in action games purely because these players just want to keep going. That 30 second ad is more likely to make them churn away altogether than sit through.

Rewarded video, on the other hand, isn’t too bad if it’s done well. It has to be very, very optional and avoidable so that users can just keep playing if they want to, but giving them the option to watch an ad in exchange for coins or boosts can be effective.

Banner ads aren’t too bad, which is not something you’ll hear us say too often…

The real hero in this space is In-Play advertising though. Okay, surprise surprise, we like the thing that we’ve heavily invested in building… But hear us out.

Placing adverts inside game scenes makes them completely non-intrusive, and thus has no impact on an action game’s retention. In our endless runner example, in-play ads could be shown significantly more than any other ad type without breaking a player’s flow in the slightest. That’s higher revenue, better retention, and happier players. Win, win, win.

But enough of the sales pitch.

Action games are a unique beast with unique needs, but this article puts you in a great place to start to understand who’s playing them and what they respond to. After all, your game’s design and monetisation are equally important to you and your players so put just as much thought into both.