Recently, we released an article on network effects – the power of a network of users being more valuable than the product or game itself. Building off of that, it’s time to talk about the console wars.

Except it’s not a console war as we know it. War has changed.

Before we get into that, it’s important to establish two things that we’ll dive into in depth below:

There’s been a lot of specs coverage in the media around the currently unreleased Xbox Series X and Playstation’s PS5. For good reason too as both machines are shaping up to be impressively powerful devices.

But when we say that the consoles can’t compete, we don’t mean that this is a close battle. We mean that hardware doesn’t really matter the same way that it used to.

As proof, just look at the Nintendo Switch. A different beast entirely in the current console wars, and significantly underpowered compared to the PS4 and Xbox One. Yet in just three years, the Switch claimed half the market share of PS4, except the PS4 had seven years to earn that. 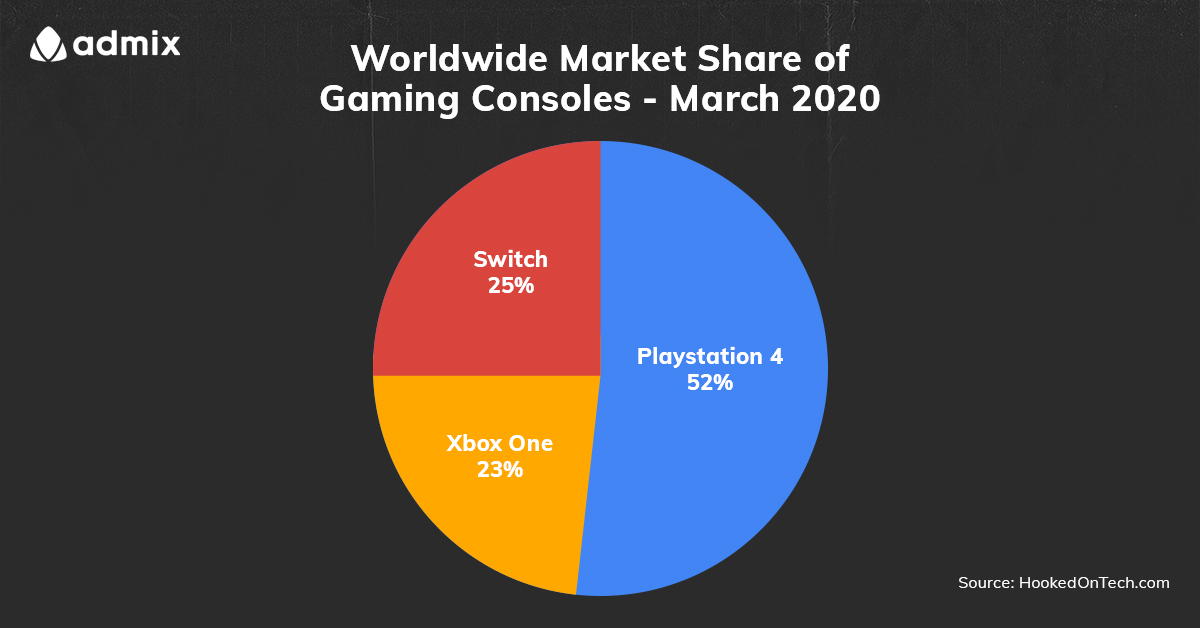 Gaming in general has been growing in popularity lately, but a large portion of that is in the mobile space. Mobile is actually approaching half of the global gaming revenue share in the world and, if you’re a dedicated console player, that’s probably a huge surprise. 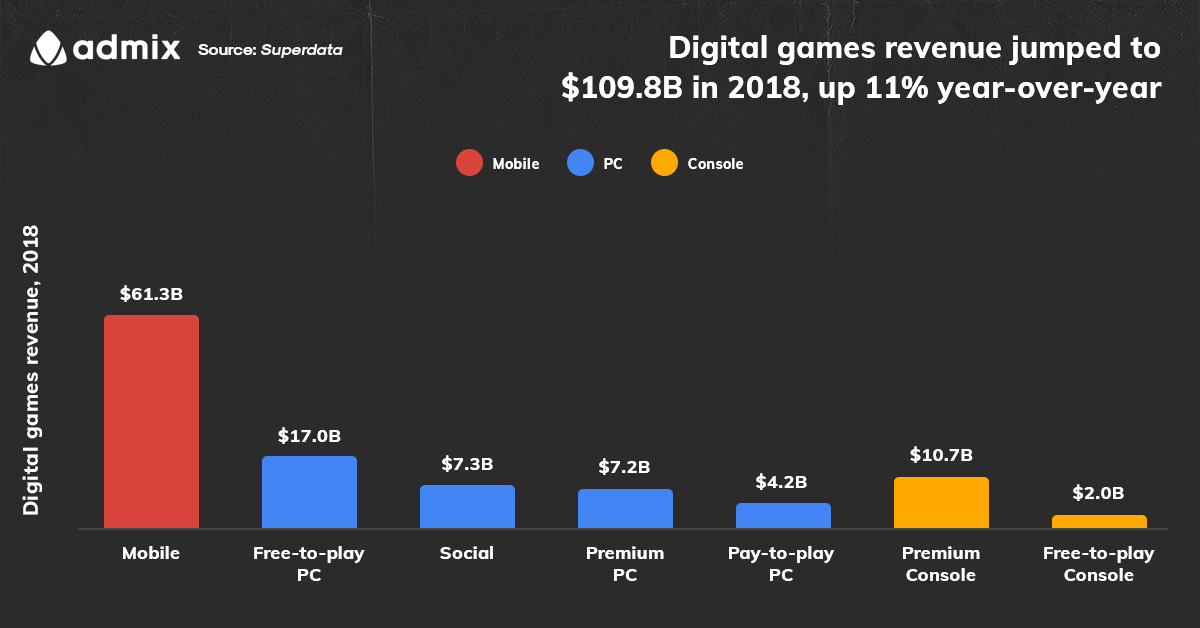 The reality is that mobile gaming draws in a huge audience that console gaming simply hasn’t been able to reach yet. The reasons for that are endless, but here are three of the biggest:

These three factors combined portray mobile to be an entirely different beast to console gaming, and if console wants to recapture some of that market share then it will need to learn from the mobile space. Business practices are going to change, but more on that later.

Consoles aren’t at war with other consoles

In this section, Microsoft is going to be key in our explanation because they are keenly aware that they’re not competing with the PS5 or Switch, but with Google and Facebook.

Here’s Phil Spencer, head of Microsoft’s Gaming and Xbox team in interview with The Verge:

“When you talk about Nintendo and Sony, we have a ton of respect for them, but we see Amazon and Google as the main competitors going forward. That’s not to disrespect Nintendo and Sony, but the traditional gaming companies are somewhat out of position.”

Microsoft’s belief is that the future is indeed one of accessible gaming, and they’re working hard to create a cloud infrastructure to stream top games into your home. This cloud infrastructure is a resource that neither Sony nor Nintendo have, so they’re hedging their bets on this being their edge over competitors and putting them on the global stage against Google.

Of course, we have now hit well over 2 billion gamers and 660 million of them are casual mobile players, many of whom wouldn’t even think of themselves as gamers. Their interest in console releases is almost zero, because all they want is to fill spare time in their day with free interactive entertainment. We discussed that in our hypercasual article.

So in terms of accessibility and attention, consoles of the future shouldn’t simply try to do better than other consoles – they should try to compete with mobile.

There is an argument to that by saying that consoles cater to a more hardcore gamer while mobile caters to a casual market. Everyone has their area and it works… Except no one has an area really. Switch’s success targeting that casual market speaks for itself, and – if you want more proof – just look at how successful F2P console model is starting to be: the ‘mobile’ free to play model is when used on consoles:

Free to play console in 2018 made $2 billion in revenue compared to premium titles making $10.7 billion. Damn impressive considering how few free to play console games there are compared to premium. And don’t think it’s just Fortnite making up that figure: Warframe has been growing its revenue 27% year-on-year cross platform, and that’s not to mention titles like Gwent or Smite either. 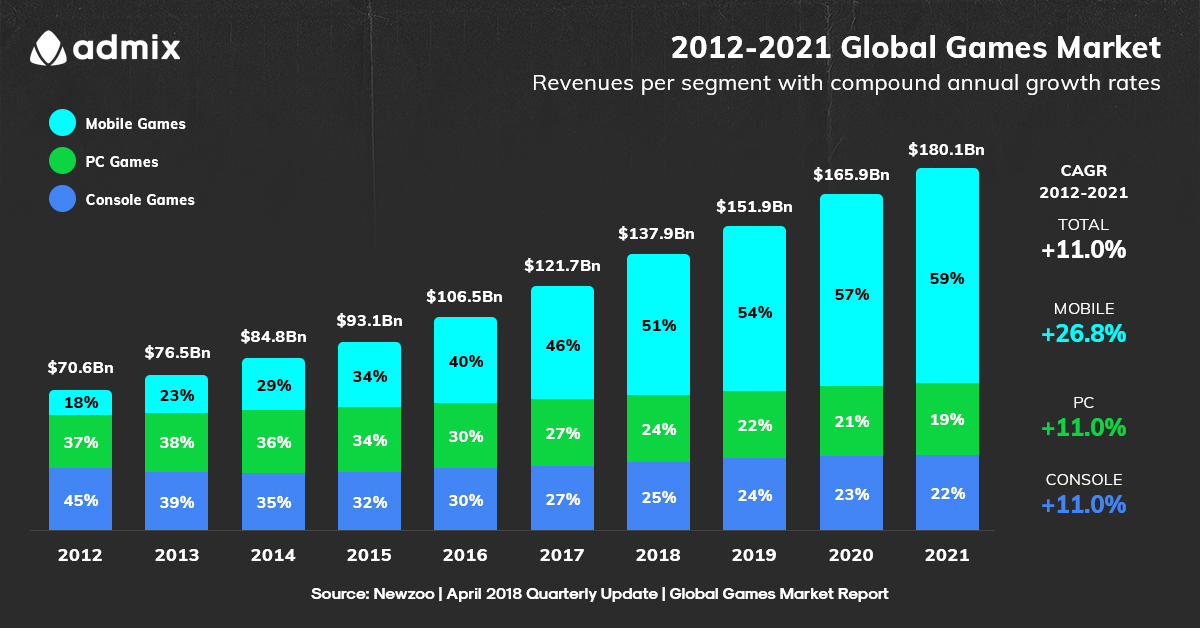 So, here are the 3 things that consoles of the future need to respond to

This is something that mobile and PC are doing incredibly well, but console hasn’t quite figured it out robustly yet.

On mobile, two major systems are in place to recommend games: games advertised within games, and algorithms that suggest (mostly free) games based on your playing preferences. Steam too has great suggestion algorithms to encourage discovery, which they’re actively tweaking and improving. A current example is their Deep Dive lab experiment.

We believe that console should be experimenting with a combination of both. Even hardcore gamers love free stuff, as can be see with breakout successes like Fortnite. Between this growing free-to-play segment and an increase in demos, consoles will move to the ‘try before you buy’ approach that has led to mobile’s revenue explosion.

Imagine a home screen with the product category breakdowns of the App Store with the suggestion algorithms of Steam and Steam’s social suggestion elements: both what friends are playing/spending money in, and recommendations from curators.

Of course with these changes new business models will be necessary. Demos will be the same as always, aiming to drive purchase of the full game, but will likely make the most of games being more modular. At the end of a demo you might be prompted to buy the game now and keep your progress from the demo as well as getting a FREE exclusive cosmetic.

As monetisation models become less intrusive, full free to play games on console will likely include ads too. Probably in-play ads, as League of Legends is playing with. Beyond that, the tried and true microtransaction process won’t go anywhere.

Consoles are great at creating communities, don’t get us wrong. What will change is how consoles interact with the global cross-console gaming communities of platforms like Twitch.

The average Twitch user watches about 95 minutes per day on average, while average gamers spend just around 1 hour playing per day. Watching is clearly as important to the gaming experience as actually playing, so more emphasis will likely be placed on this.

Imagine a Twitch-like widget on the console home screen showing a variety of currently playing streams in games that you might be interested in based on a recommendation algorithm. Show which friends are currently streaming, who they’re watching, and offer robust picture-in-picture so gamers can watch AND play at the same time. Plus, the live sharing at the touch of a button capability of the PS4 will absolutely reach the next generation of gaming too, and it will be a robust way of making a career out of streaming.

Not only does a better focus on community tick that discoverability box too, but it makes even single player games more social and pulls players into this global community.

This is something we touched on above, but consoles of tomorrow will offer a variety of games even broader than mobile right now. Everything from hyper-accessible hypercasual, to the most hardcore of hardcore games.

This is naturally to attract that “non-gamer” segment of gamers, and you might be thinking that casual games on a console doesn’t remove the initial barrier of buying the console. However, even in 2015 51% of US households had a gaming device in it. That’s the hurdle removed and I for one can vouch for the fact that my mother will be playing a match 3 game on the TV while waiting for the kettle boil if the option was easily accessible.

This too will be integrated into that App Store-esque home page, maybe even titled something like “Minigames for Micro-breaks” and they’d play on a similar ad based revenue model to the hypercasual games of mobile.

The premium focus of consoles right now is gradually becoming outdated and niche in the wider gaming world. Paying an initial price without knowing if you’ll enjoy a game alienates a wide variety of gamers, especially in the younger age bracket who don’t have disposable income but are crucial to gaming through making videos and discussing it in forums. The limited discoverability on consoles and lack of some of the more casual genres further narrows their gamer field-of-view.

We’re absolutely not saying that all premium games should be free and rely on microtransaction and ads. There is a place for this business model, but it just can’t be the only one in the consoles of tomorrow.

A new approach to designing the console experience will lead to new console gamers, which will require new but lucrative business models to come into play. Consoles will change, that’s inevitable, but we’re excited to see just how much they learn from casual gaming.