We’ve spoken about social media a lot on this blog, usually about how it’s moving away from platforms like Facebook and into games like Fortnite. We’ve always made these points in support of some bigger topic though, so it’s about time that we gave it the attention it deserves in its own post.

Luckily, Co-Matter recently released a comprehensive report about declining social media usage in general which is an excellent base for our argument. Let’s dive into that report, and place it specifically in the context of gaming and monetisation.

Social media was inevitable, but it’s changed – a history

From the very early days of the internet, the creation of social media was inevitable. Humans are social creatures after all, and a global network of connected information is always going to become a means for individuals to share and communicate.

Just look at Community Memory back in 1973. It was the first digital bulletin board, set up in a record shop in Berkeley California as a resource sharing network for organisations. It quickly became a general information exchange where people simply shared stuff with each other. Art, messages, literature, news… It became a local social media.

As technology progressed, the public craving for larger networks of friends were met. AOL in 1991 gave us messaging boards and mini walled garden communities along with our dial up internet connections. 1997 gave us Six Degrees, the first social media site using profiles which opened us to sharing ourselves online. Blogging sites grew in popularity in 1999, paving the way for MySpace, Facebook, Twitter, LinkedIn, and all the social media of today.

The major difference between the social media of the early-internet and today though is how commoditised and micro-managed it is. Feeds are now curated with algorithms and advertising is everywhere and intrusive. Advertising allows us to have this for free and that’s fantastic, but the out-of-control intrusiveness is making it feel like social media is for brands, not friends.

Back in 2017, only 41% of people globally said that they trusted traditional social media. Here’s betting that that number is even lower now. It’s likely the reason that teens are abandoning platforms like Facebook in droves.

How has that change made people feel?

The Co-Matter report puts it beautifully: the rise of social media was all about everyone wanting more. More likes, more friends, more followers, and on as many platforms as possible. But here we are today, highly connected but unfulfilled.

They believe that the post-social media age that we’re entering is all about really conscientious social media usage. Either being more careful about how you use the platform (following fears of manipulation after recent political scandals), simply using it less, or trying to have a smaller community of closer friends on each platform.

74% of the Co-Matter report responders said that they’re trying to reduce social media usage, and 7% siad they’re increasing usage with the aim of fulfilling specific needs, like staying up to date with news.

This goes alongside the immense amount of data – both qualitative and quantitative – on the internet saying that social media use is falling, especially in young people. Look at the usage chart for Facebook in particular: 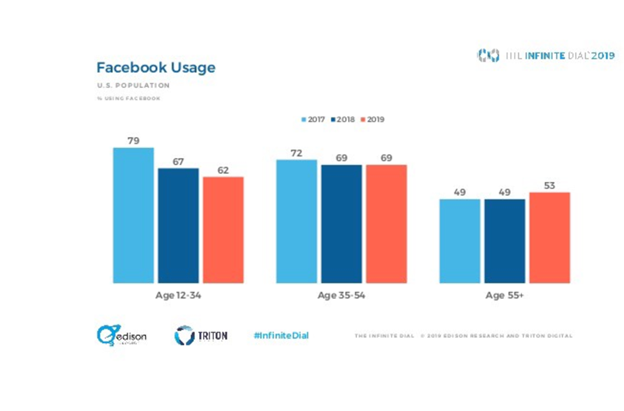 The report argues that the internet and social media in general has become hyper-personalised; our news feeds and social feeds are chosen by algorithms and optimised to keep us scrolling for as long as possible, so collective experiences become rarer. We’re just not seeing the same stories as our friends.

Social media has tried to counter that with watch parties and livestreaming video, but the report suggests that – with the targeted ads and personalised newsfeeds everywhere else – we’re just experiencing these community events in a lonely way. A curated way. A less human way.

Plus, increasing concerns over privacy on social media are huge. Apple’s decision around changing their IDFA policy in iOS 14 shows that.

Luckily, gaming is changing everything.

Why gaming might be the new, better social media

In 1998 , as the report mentions, sociologist Ray Oldenburg coined the term “third place” to describe anywhere aside from work and home that have a community feeling – places like pubs, coffee shops, and the early days of social media.

These places need trust to work. The people going there have to trust where they’re going, it has to feel like a second home, and traditional social media just don’t for a lot of people anymore.

Videogames do, and sociologists have been talking about gaming being a new third space since 2005 with MMOs. They’re only getting more popular today – just look at Fortnite and the immense success of their social arena mode.

In fact, Fortnite has sprinted ahead of Netflix, YouTube, and Facebook in usage hours by teens, and players say that Fortnite provides the most positively impactful entertainment in their lives while traditional social media provides the least. 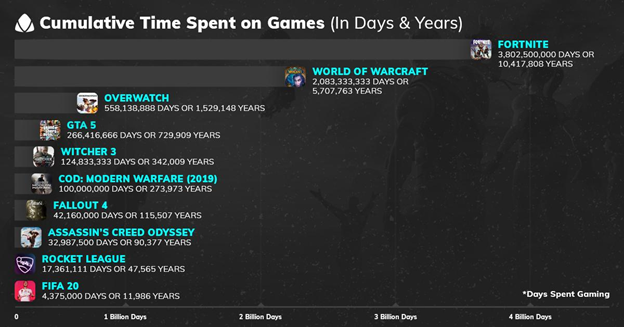 We really can’t emphasise how significant that is – People don’t want to feel hyperconnected to hundreds of people anymore, they want more genuine experiences and what’s more genuine than interacting with something? Watching a Travis Scott concert on YouTube is fine, but being inside a concert more mind-blowing than any real world one even could be, with your direct friends, is on a whole other level.

Twitch has the same raw appeal in its sense of genuine connection. The streamers are real people, the chat is all real people, and brands and monetisation don’t seem to have much presence there at all.

Except they obviously have a huge presence in games and on Twitch.

To put it one step further, you could argue than monetisation is even more present and obvious than on more traditional social media. After all, in games like Fortnite you’re paying for branded outfits (as one example), and on Twitch high-level streamers will often talk about merch, subscribers, sponsorships, funding targets, and they’ll even gamify donations with leaderboards, special prizes, or create mini walled gardens with subscriber only mode in their chat.

Advertising and monetisation like this – just like social media of old – is how we get these things for free, so why do so many people prefer this form of monetisation than the rampant ads on platforms like Facebook?

Social media of tomorrow, in short, is built on the one thing that old social media is losing: Trust.

We’re at a transition point between the hyperconnectedness of old social media and the close-knit niche focus of the social media of tomorrow, and it’s an exciting time.

Games are bringing people together in amazing new ways. I could name six people personally who haven’t interacted with their parents on Facebook in the last year but HAVE played endless mobile board games with them.

Even our games consoles are figuring out how to be more social, with streaming being a core focus of both the Xbox Series X and the PS5 in one form or another.

But best of all? This is a time of extreme innovation to optimise these platforms for the social needs of tomorrow. We’re so happy to be a part of making the monetisation of tomorrow’s social media non-intrusive, and demand for that from our own data is growing fast. We can’t wait to see how other companies will innovate too.