Player taste – what makes someone play your game?

Previously we spoke about different models of gamer motivation and how those different models have been used to explain how games might satisfy a person’s basic needs. The idea being that if something fulfills a need for someone, i.e. rhythm games make me feel skilled, then they will play that game for longer.

But does this apply to before a player has even picked up the game? Is meeting psychological needs the basis for everyone’s different tastes? And do these motivations stay the same after purchase?

The general thoughts are… No. But those pre-download taste-based decisions are crucial for user acquisition, so let’s discuss them.

The factors of taste

Jason VandenBerghe is a game designer at ArenaNet and a man that uses and develops psychology at every stage of his design process. For many years now he has been developing and giving talks on gamer motivation and his own homebrew model for why players do what they do.

One of his most interesting conclusions is that the reasons that a player downloads a game are simply not the same as why they continue to play it. Their taste doesn’t always line up to the motivations they respond to while playing or, in other words, motivation changes drastically over time in a player.

‘Taste’, after all, is a relatively straightforward thing. Think of it as a craving – if you’re craving chocolate and you eat it, you are satisfying that taste. If you’re craving an action-RPG and you play one, you have satisfied that taste too. Except unlike the chocolate, you might still be playing that game 3 hours after your taste is satiated. They must be separate things.

Therefore, we need to have some way to understand the initial player taste separate to motivation.

Jason based his answer on The Big 5, one of the most famous bits of work in psychology that has had an impact on almost everything that psychology itself has. The Big 5 is a measure of personality traits, and states that everyone falls into a spectrum of high and low on the following 5 basic traits:

(If you’re curious, you can take this test for free online at various places. This is a good site for it.)

All of these traits fall on a standard deviation, which means that psychologists have a statistical baseline for player behaviour predictions. They aren’t making up claims to test but empirically saying that half the population is more likely to enjoy X while the other half prefers Y.

The 5 Domains of Play

From there, Jason worked on translating these personality types into player archetypes, working on the hypothesis that similar personality types will likely enjoy the same types of games. He found that to be reliable for all but neuroticism and created the below 5 player domains:

Threat (maps to Neuroticism): How negative the tone of the game is, or how much it creates feelings of sadness or anxiety. This one is a lot harder to predict in terms of taste, unfortunately.

Here’s where things get exciting:

The Engine of Play, and Player Interest

So now that we can map a player’s personality and figure out what kinds of games they’ll enjoy with reasonable accuracy, we can predict their likelihood of actually caring about your game.

The key to that is the standard deviation that The Big 5 inherently has within each trait. For example, within the Novelty domain of play we know that 60% of the population will fall in the middle, 15% will lean more towards liking fantasy or realism in games, and 5% will be avid fans of the genre. 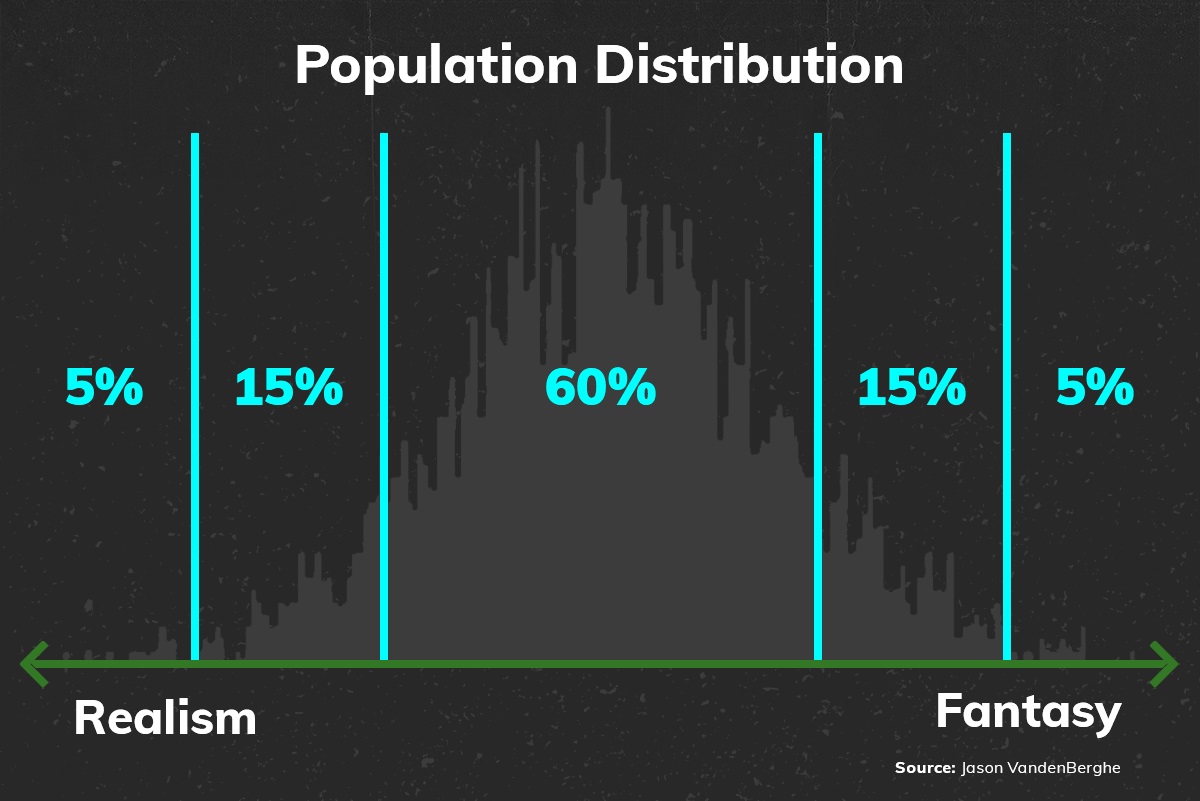 Jason proposed that you can map out Domain of Play across 4 factors and then map out a standard deviation across that to create what he calls a ‘taste map’. So Novelty becomes this: 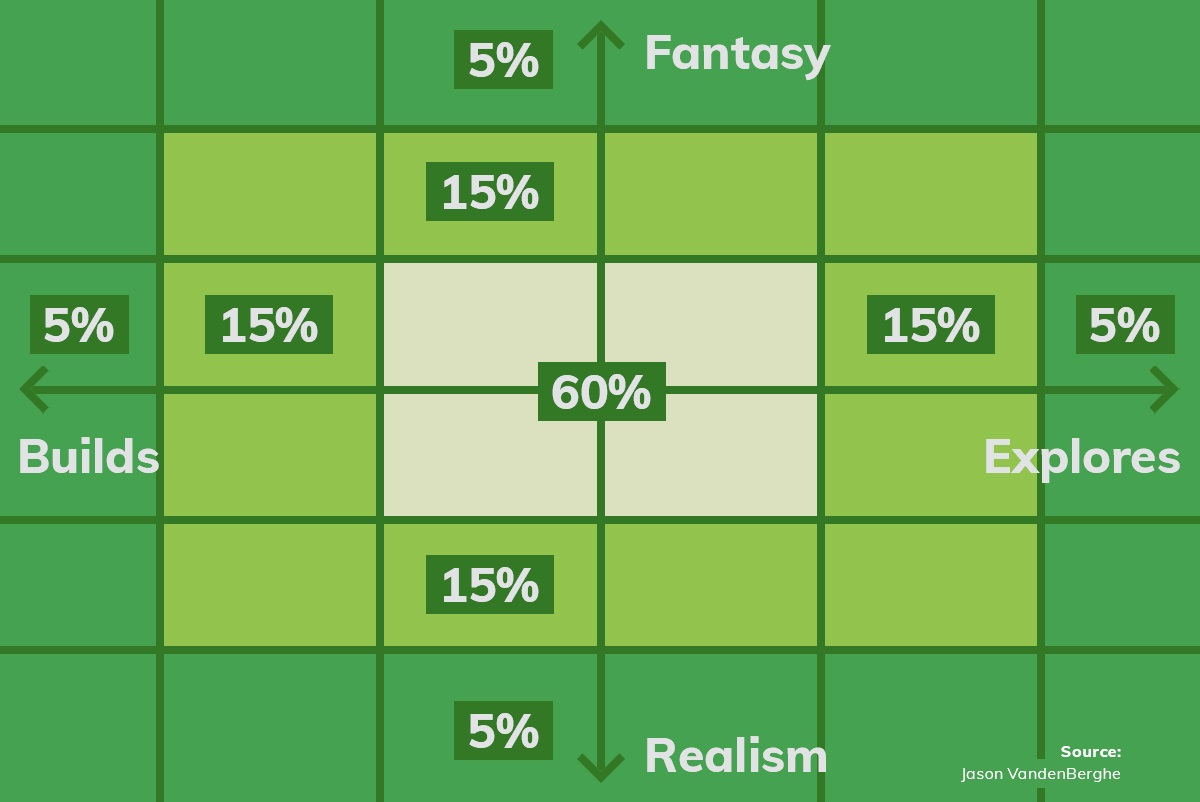 Or, to put it in his words, this is a map of how much people give a shit.

You see, you might look at that map and think “Oh, most of the market is in the middle so I should design for that” but, within Jason’s model, that is actually the lowest investment layer. The further out a person is from the middle, the higher the investment layer they exist within, and the more likely they are to buy a game that meets those needs. If I’m in the outer ring of fantasy and someone offers me a fantasy game, I’m going to buy that immediately whereas offering me a realistic game and I’ll laugh in your face. 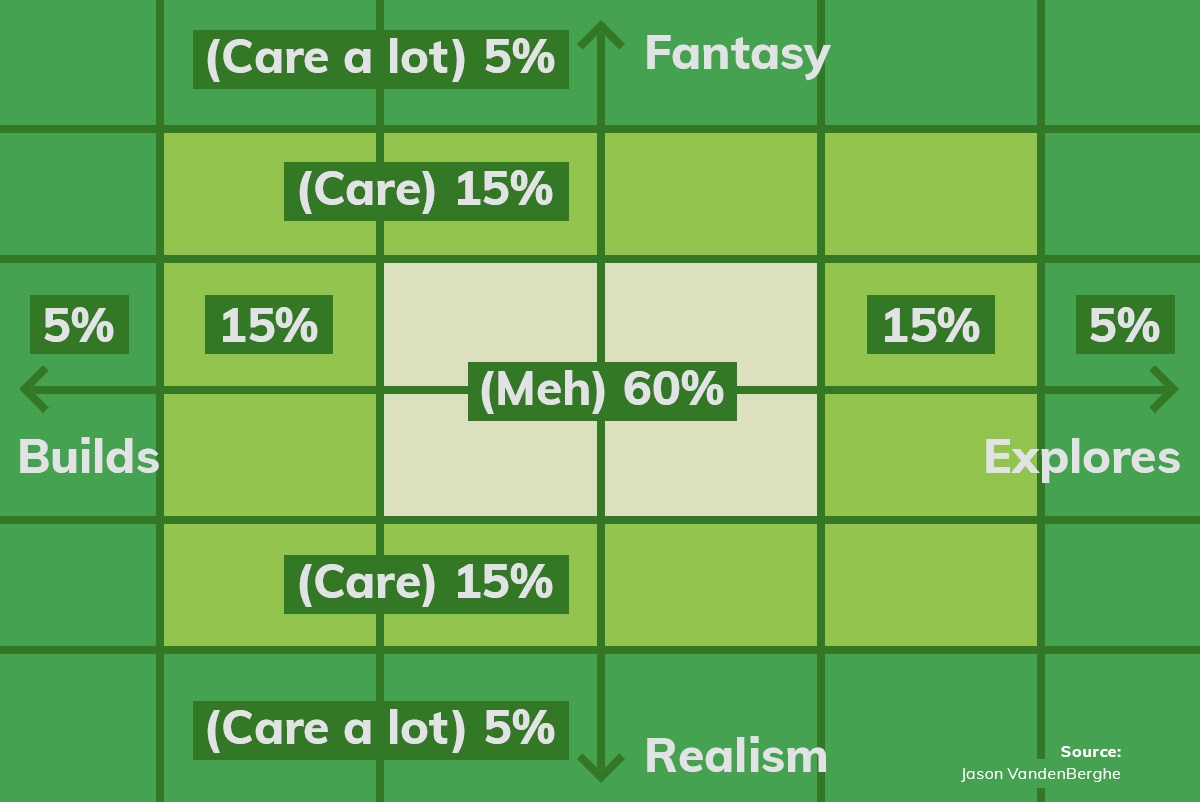 And here are the taste maps for all 4 domains: 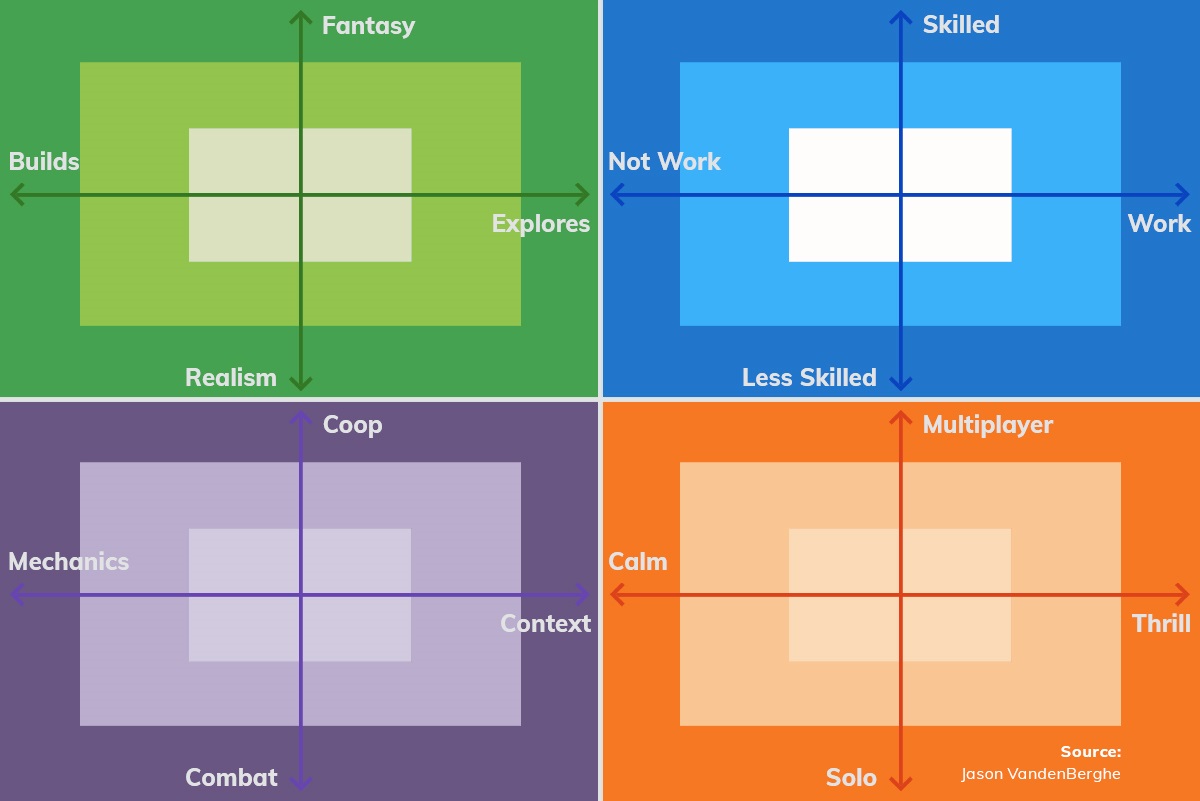 Why this is so important for game monetisation and user acquisition

In the most basic sense, the more niche your game is the more likely you are to have passionate advocates who will love your work and share it organically. Of course, catering just for the niche market requires completely different monetisation and marketing than a game catered to the middle of the road audience.

Let’s put it this way, hypercasual games are designed for that middle, low-investment audience. The marketing tactics are to use appealing imagery and, occasionally, misleading adverts to get those users in because they don’t really care about what the game involves. But because this audience is so uninvested in the game, retention is incredibly low so – to make a profit – each user is shown as many ads as possible per session.

You can read the unit economics for hypercasual games in our article here.

Strategy games, on the other hand, appeal to a niche audience across many of these taste maps. They’re often fantasy-based, they’re often multiplayer, they’re often skilled, etc. So there is a much, much smaller audience for these games but the audience that’s there is highly invested and likely to stick around for a long time. That means in-app purchases are likely needed to create the revenue you need, especially because whales exist in this high investment audience.

First things first, fill out each taste map based on your game.

Fill in the centre ring (the 60%) based purely on whether or not your game has that feature. So, for example, a starting taste map for Minecraft would look like this: 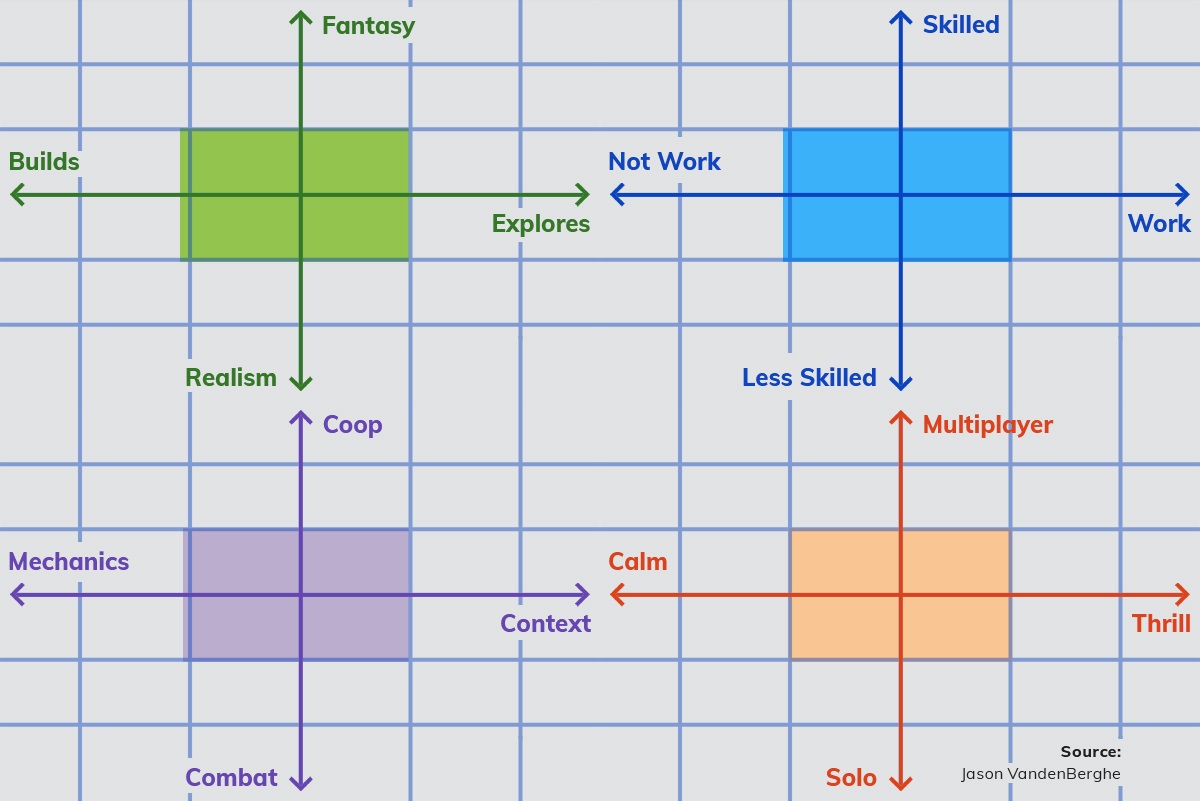 Then fill out the next ring up. The questions to ask yourself for this section are:

How much does this feature matter for your game?

Is this feature actually notably good?

Do you want players to like your game because of this feature?

Let’s focus on the Novelty box in that Minecraft example: 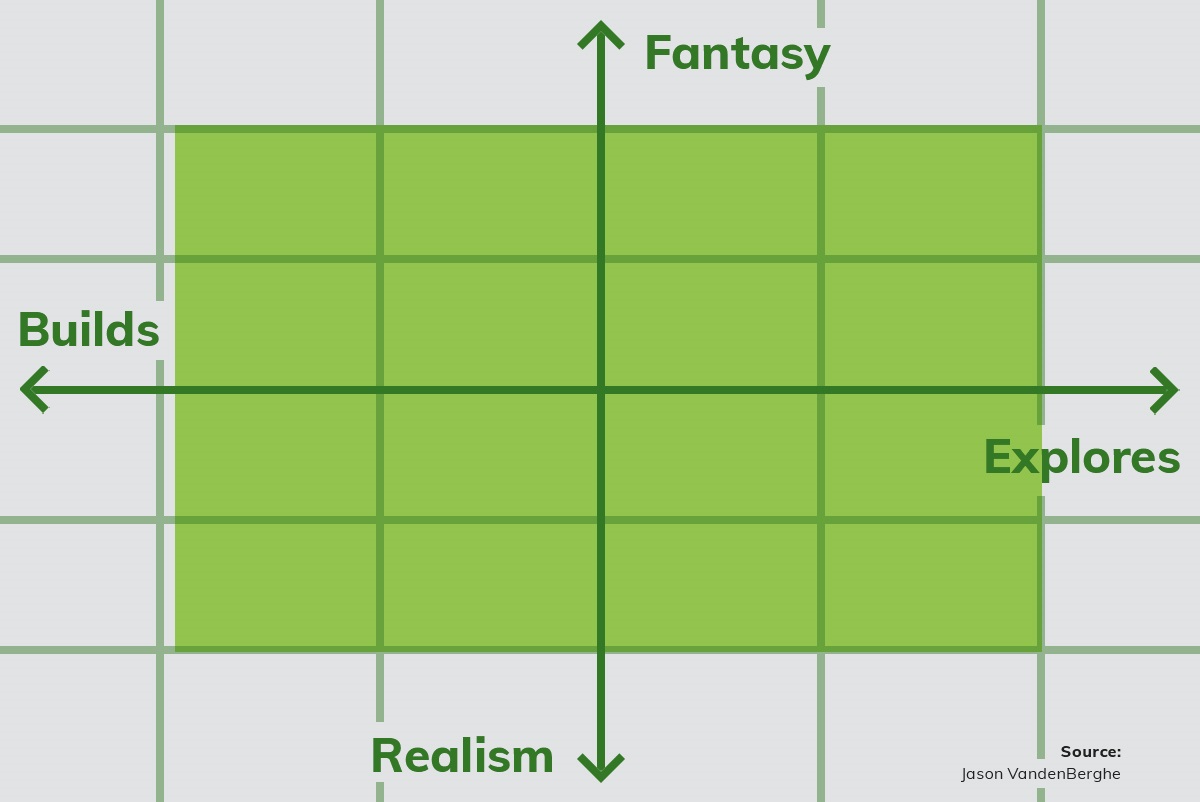 Minecraft does all of these things really well. The exploration is great, the fantasy is great, the building is great, and your ability to create whatever you want means that it’s as realistic as you want.

At the same time, going over to the Challenge map, Minecraft is still exceeding. 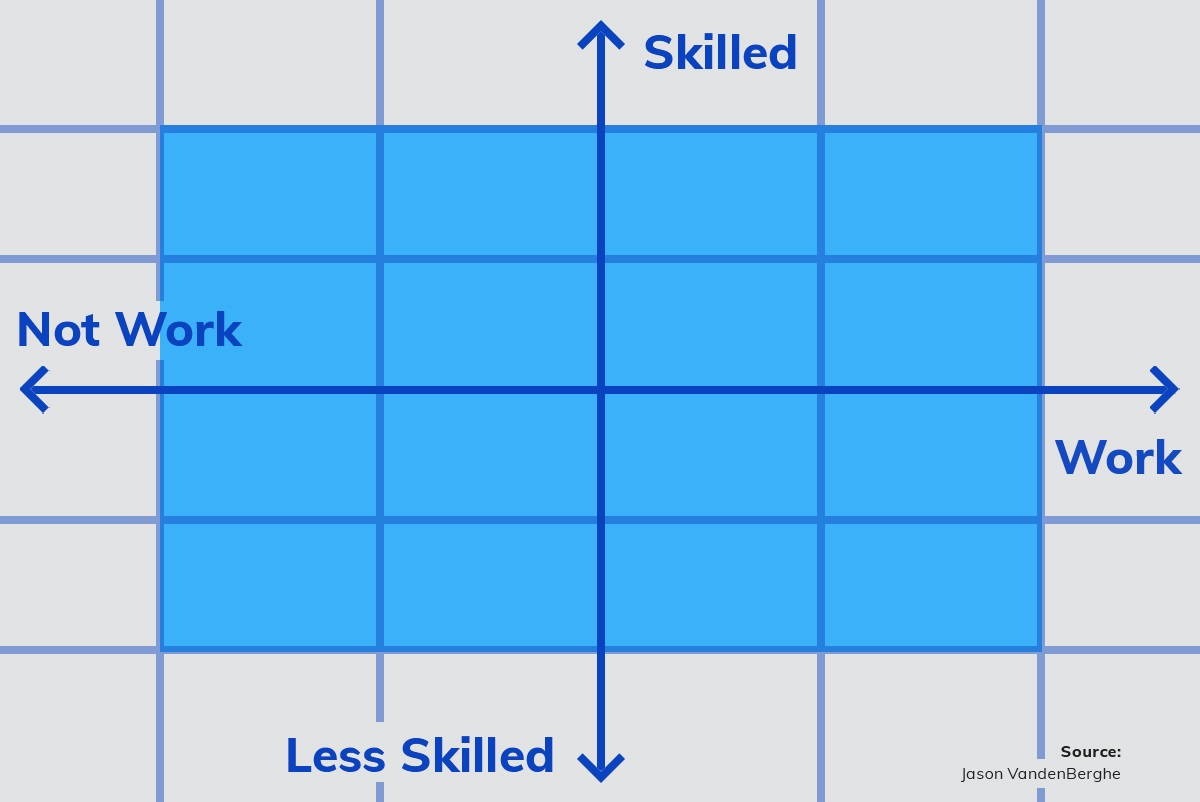 The game can be relaxed and unskilled in creative mode, and it can be skilled and difficult in hard mode – especially if you spend most of your time in the Nether.

And if we start filling out the other taste maps too, you start to realise why Minecraft is such a monumental success. It appeals to pretty much everyone in this second investment layer, giving it not just a huge potential audience but also a huge invested audience.

Then we take things to the final investment layer. These are the absolute core parts of the game. Ask yourself if this part of your game is truly great if it’s among the best in the world – in Jason’s words. Because if it is, this bracket of users will absolutely love what you’ve made and stick with it for a long time. 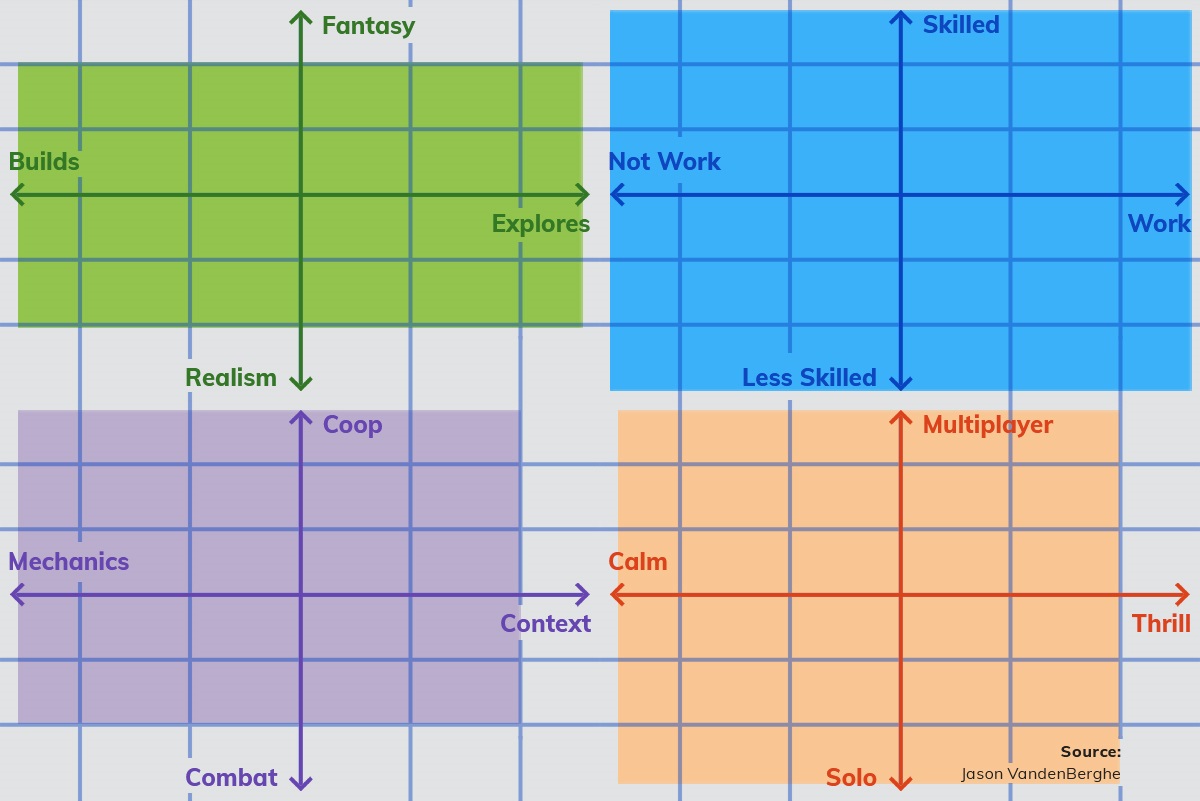 Yours most likely won’t because Minecraft is a rare case where they did everything, and did everything incredibly well. In the early days though, it built its following from that high investment layer for “Builds”, “Explores”, “Solo”, and “Multiplayer”. And then they got a budget. Be careful in overreaching – remember that the high investment boxes tend to require a lot more work to make that feature in your game truly appeal to high investment players.

As Minecraft is such a unique, unusual example it’s probably valuable to look at a couple of other games and their taste maps.

The Stanley Parable is an indie darling that was a huge success but had a more limited scope. It was single-player only, there was no crafting, it was narrative-driven… This is what that taste map might look like: 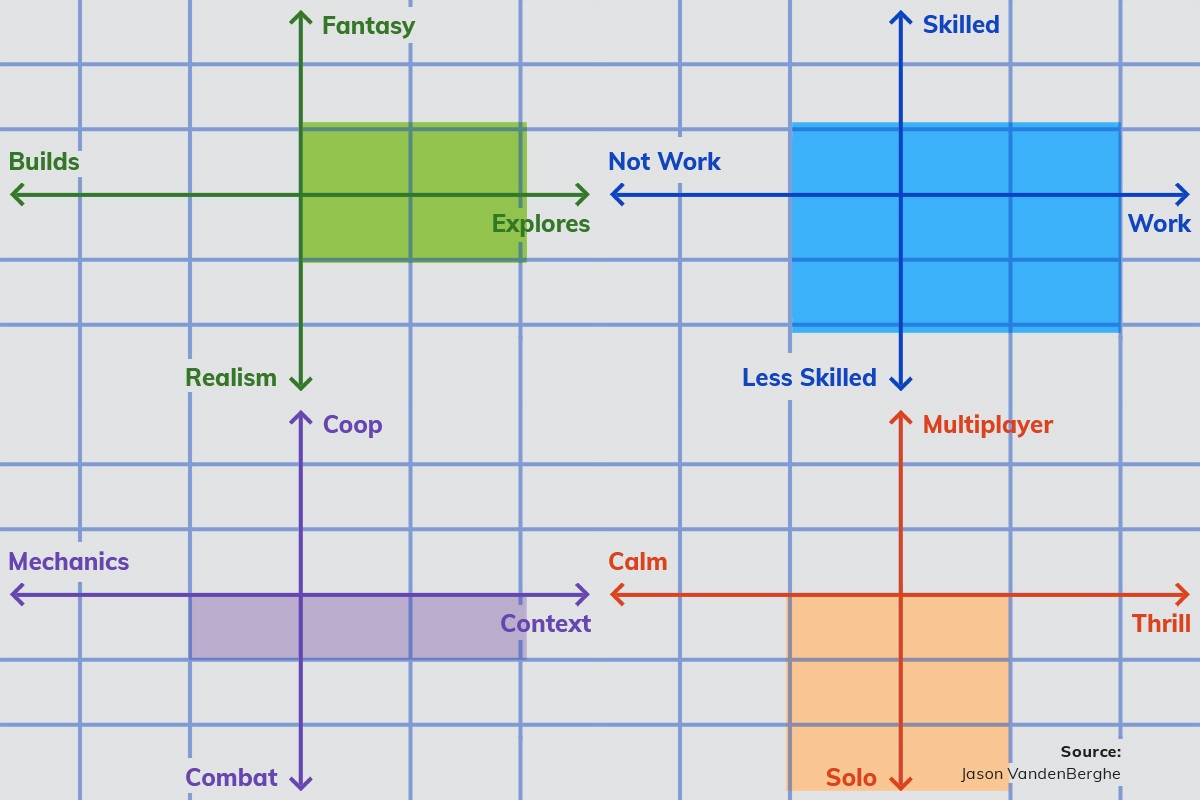 And finally, as we know a lot of people that read this are in the mobile games space, let’s have a look at a taste map for Game of War: Fire Age. 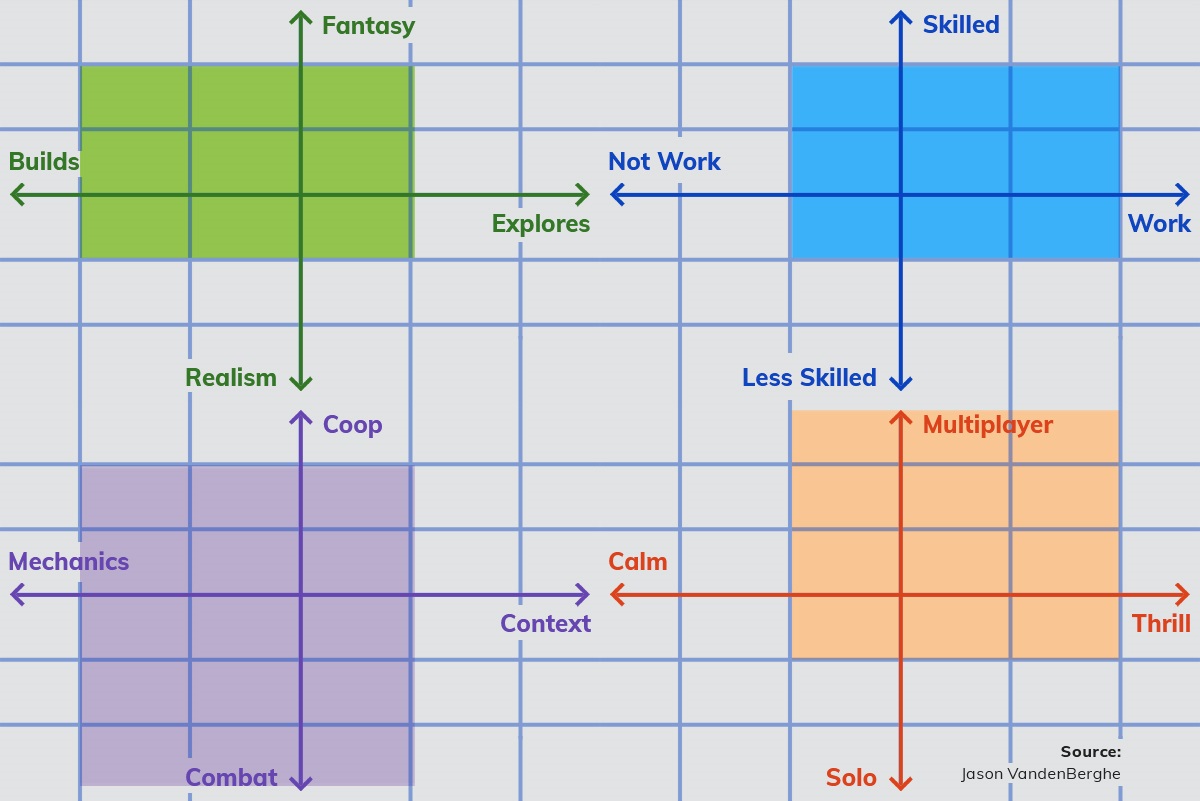 This is a game all about your interactions with other people. Cooperation is important, but the core experience that they want to create is conflict. Thrill. It’s a mechanics driven game with a little story, there’s a lot of work involved in playing it well but you still choose what to build yourself so it gets the basic levels of Not Work and Less Skilled in there too. It’s also trying to create a rich fantasy environment, but there are realistic elements at a base level – there are recognisable objects, strategies, soldiers, etc.

With a taste map like this, it’s unsurprising that the game focuses on in-game purchases to tempt players into getting an edge over opponents (the conflict focus) and in helping their team (the heavy multiplayer element).

Neither Fire Age, nor The Stanley Parable tries to do everything, but what they do they excel at. They still had relatively large scopes, whether there was a lot of money behind the game or a lot of time investment or both to allow that, so if you need to narrow your scope even further to be the best at one thing do it.

Now that you have your maps, look at how much niche (high investment) appeal you have and how much broad appeal you have. This will inform your monetisation strategy, as per our hypercasual and strategy examples above.

It’s also worth noting that the more niche your audience is, the more your user acquisition will cost but also the more reflective of your gameplay it should be. These are people who want these features, not just mass-appeal graphics. If you have a marketing team, these maps will drastically help you to communicate the demographic that you’re aiming for. And if you are the marketing team, this will help guide your strategy in creating ad assets.

So now you know how to acquire and monetise users based on player taste, you need to keep them in the game. For that, you should refer right back to our guide on player motivation 😉

iOS 14: a huge win for Brands and Consumers