“Human beings innovate by combining and recombining ideas, and the larger and denser the network, the more innovation occurs.”
– Matt Ridley, The Evolution of Everything: How New Ideas Emerge

Back in the day, games used to be easily associated with a category: Mario is a platformer, Tomb Raider is an adventure game, Doom is a shooter, Final Fantasy is an RPG, and so on.

Over the past couple of decades, publishers have been learning from successful titles and extracting mechanics from these single-genre games to merge them together. To immense success, as I’m sure you know. Puzzle -Platformers like Portal, Action-RPGs like Kingdom Hearts, even modern genre innovations like Superhot’s Puzzle-FPS to name a few.

Mixed genre games can generate more revenue, help a game standout in a crowded market, and increase the overall potential user base of all mobile games. They’re that powerful when done right, and we’re here to explain how, why, and what you can do to get a piece of that success.

At first glance though, it seems like the biggest breakaway successes on mobile are single genre affairs. Just looking at this list of how much total revenue the top games take from the overall market shows how single-genre titles are currently dominating, and hypercasual’s rise is further proof of that. 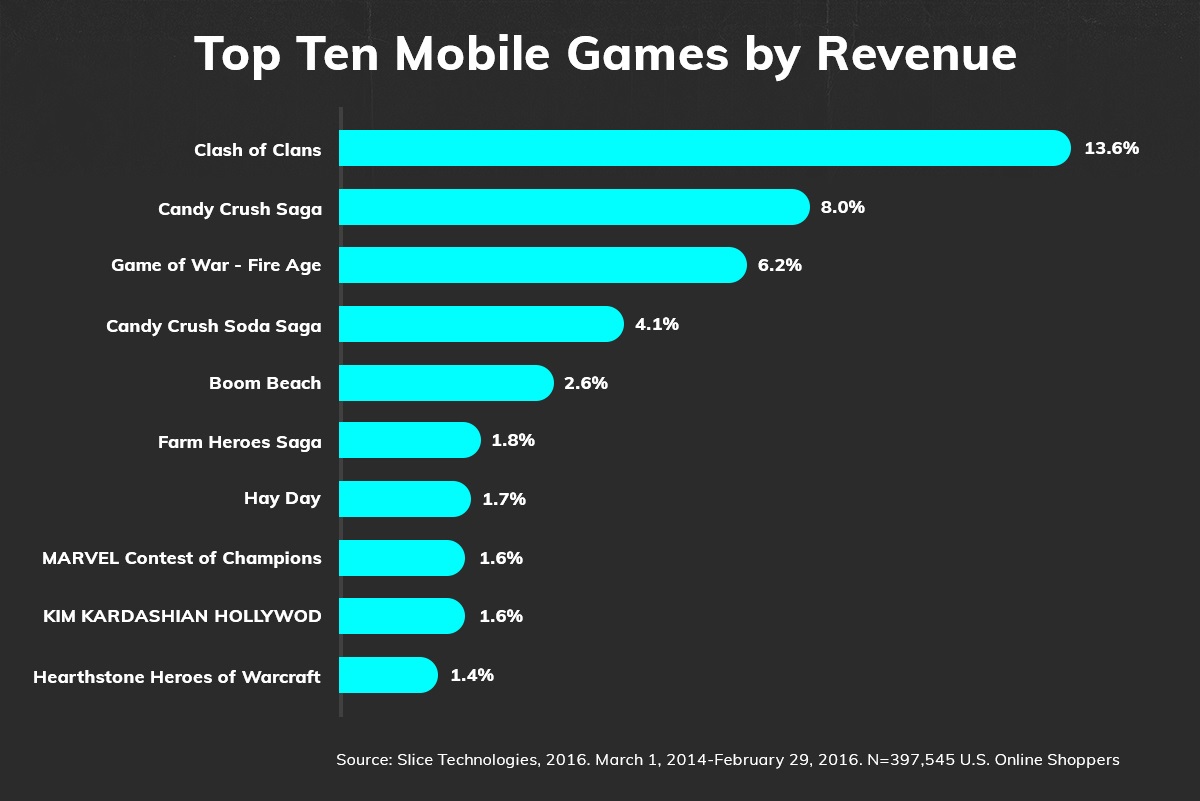 Even with that in mind, mixing genres is a great choice for two reasons that we’ll dive into below:

1 – It lets smaller publishers put up a fight against those titans of mobile gaming by widening the potential audience across two genres AND offering amazing opportunities for virality, marketing creative, and keyword optimisation.

Why hybrid is the best of both

Every genre has its strengths, weaknesses, and specific audience. Hypercasual attracts non-gamers but requires rapid revenue from ads because of fast player churn. Strategy attracts hardcore commited gamers, but generate most revenue from in-app purchases so need a lot of content and long development times to keep players invested and spending.

Hybrid genres allow you to minimise the weaknesses and maximise the strengths of your component genres while pulling in a much wider audience.

The example that we love to gravitate to is Archero. Archero, at face value, seems like a hypercasual title. The controls are incredibly simple and the gameplay loop is rewarding and short, but once you’ve completed a few levels this deep metagame starts to appear. You slowly get pulled into this strategy and RPG content, and before you know it you’re not playing Archero to pass a few minutes before the bus arrives but because you’re invested in the deeper gameplay.

Considering that the game made $8.5 million dollars in just its first month, this mix was clearly a success.

The exact same thing happens with the rising genre mix Puzzle-RPG, a category that tends to combine Match 3 gameplay (a genre that accounts for 20% of total US game revenue on iOS), with revenue boosting features like gachas, guilds (social pressure to not let your guild down), and subscriptions. It draws in Match 3 veterans and generates much more revenue from them thanks to RPG’s in-app purchase driving power. 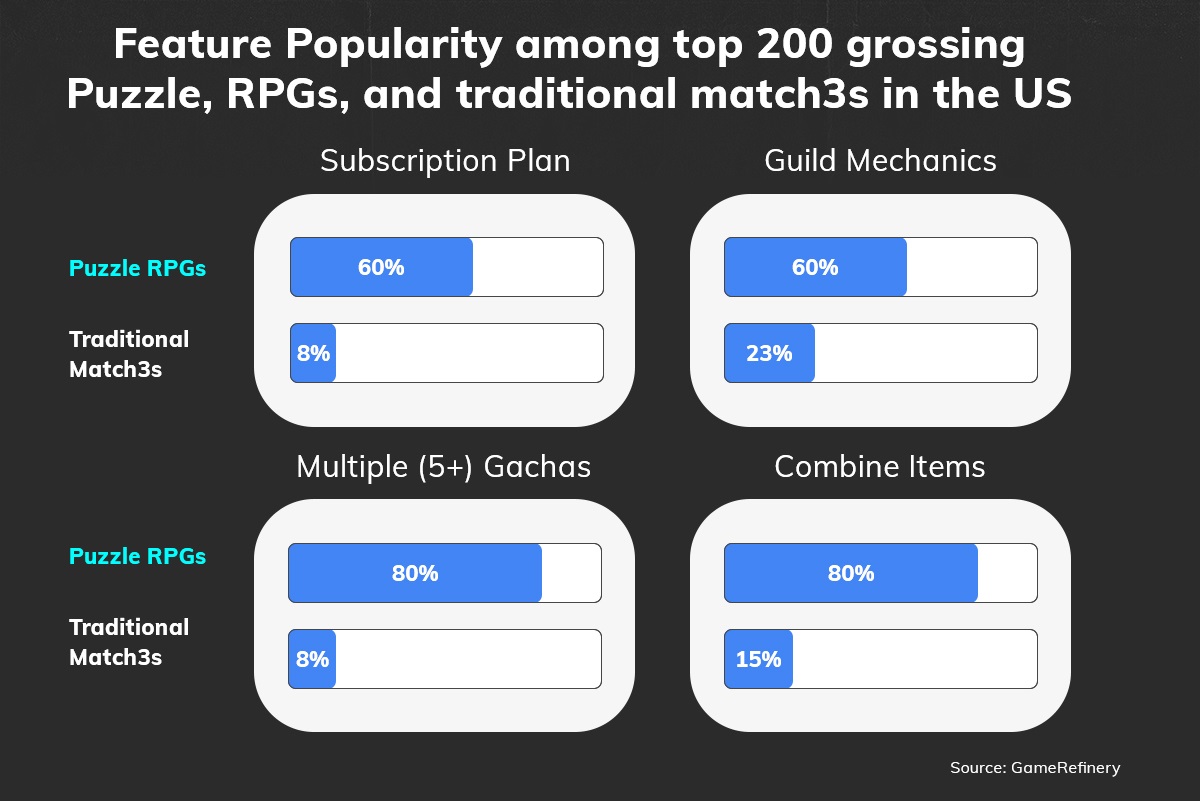 Playrix is a company that combines genres expertly with massively grossing games like Homescapes and Gardenscapes, both $1 billion narrative driven puzzle games.

There’s a fantastic breakdown of how Playrix integrates midcore genre elements like base building and daily quests to puzzle, but it’s this quote from Playrix Creative Director Igor Elovikov that really stands out to us:

“This also proves casual players can be intentionally matured to move towards more mid-core mechanics by light introduction of [midcore] features.” 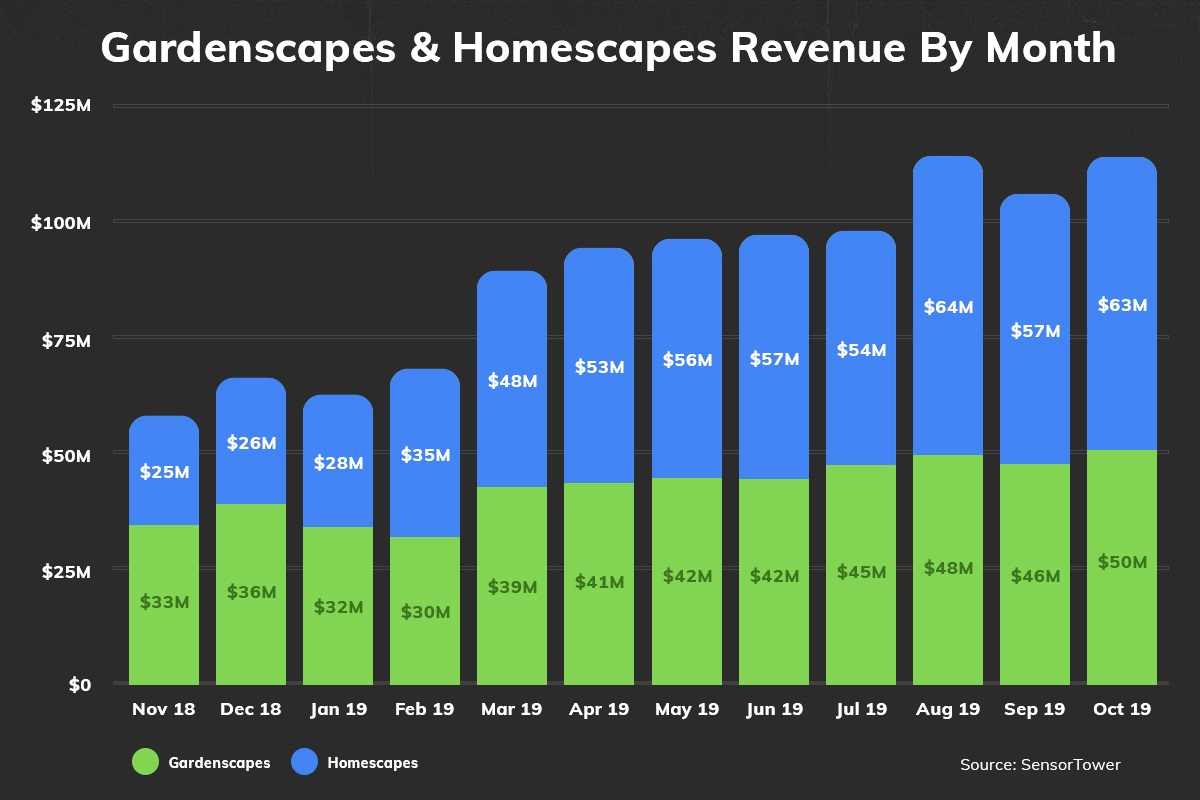 Especially in the casual genre space like Match 3, these hybrid-games are doing important work in converting non-gamers into dedicated ones. Making them seek out more hardcore experiences and acting as a comfortable middle-man between accessible genres like hypercasual and the wider gaming market.

In short, these hybrid genre games are increasing the overall gaming user market for everyone while making themselves stand out in each genre as they do.

And that marketing benefit really can’t be understated either. Not only does combining genres give your advertising creatives so much more power and virality (just think of Superhot or anything from Playrix), but it gives you keyword power too. You can target people searching for terms in both genres as part of your App Store Optimisation, which deserves an article of it’s own at some point.

Focusing on converting casual players to mid-core gamers through that hybrid approach for a moment, here’s our take on the bare bones feedback loop to achieve that. 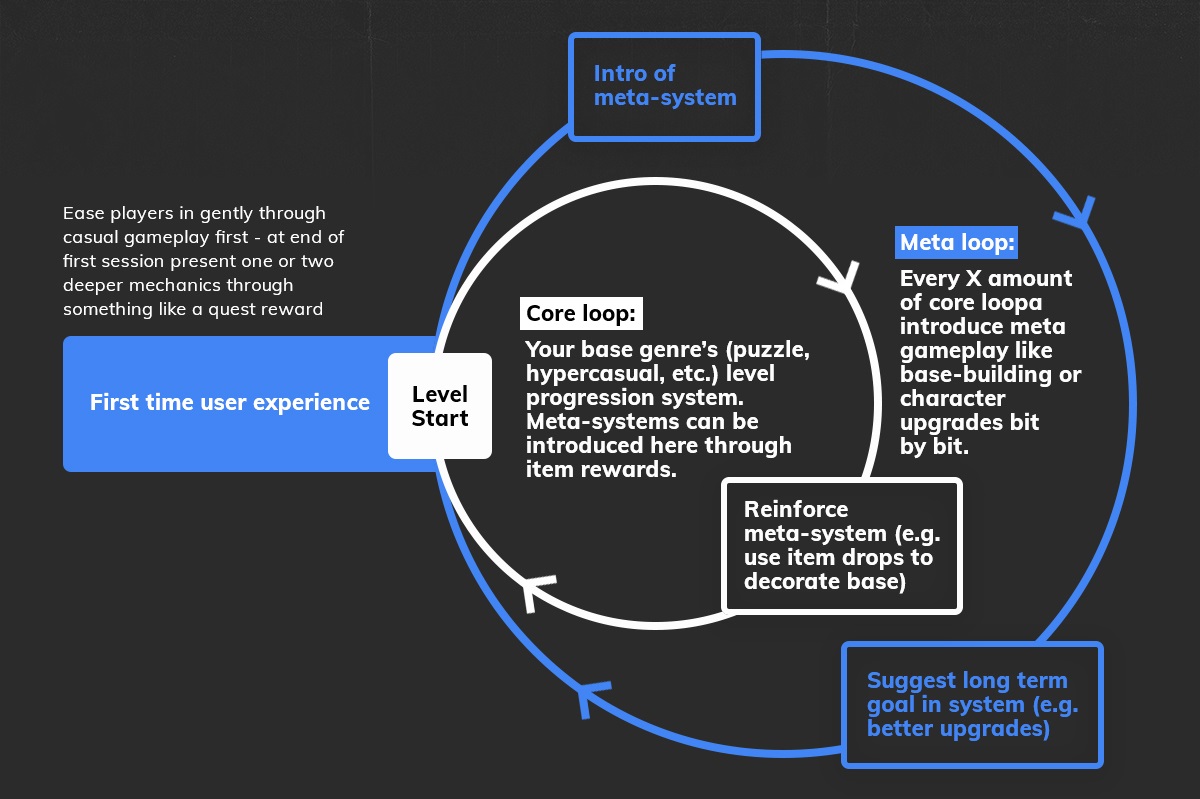 Let’s break it down.

Your first time user experience needs to be in line with the more accessible genre of the two you’re using. After all, your user acquisition efforts were probably focusing on that because it’s easier to present, or because your low-fidelity graphics appeal to more casual gamers than strategy.

Introducing too much meta-game in onboarding will overwhelm these players and turn them away. Instead, keep gameplay simple with a tutorial level or two and hint at deeper gameplay through item drops, or experience gain, or whatever the core concepts of your meta-game are. We can’t stress enough the need to take things slow though, and not to offer something that needs a lot of explanation too early on.

At the end of onboarding, allow players to try out the small meta feature they experienced from onboarding. Allow them to equip the item or level and – most importantly – make this feel significant and satisfying. You want to associate this deeper gameplay with fun straight away, so let them get back into the game and make that first item a big boost in strength, for example.

Every few core loops (every few levels or stages) introduce another meta game mechanic until you run out and players are fully onboarded to every feature of the game. Again, this slow introduction is to prevent more casual players from being overwhelmed.

The final and important part of both loops is reinforcement. In the core loop, reinforcement comes in the form of reminding players about the meta loop through item drops, or currency gain, or whatever’s right for your game. In the meta loop, reinforcement comes in the form of goals that are slightly out of reach. Ones that are just a little too expensive but if I play another level I might have enough to earn it… This breadcrumbing goals system will keep players engaged and retained for longer.

This is naturally a very simple overview of what’s needed for this hybrid loop to work and it will depend heavily on the game you’re making. Still, this will hopefully display the need for the loops to work together and not overwhelm the casual side of your audience.

First of all, the greater user acquisition from the accessible base genre gives a large starting pool of players to monetise. That doesn’t mean you should necessarily advertise aggressively to these users as hypercasual games do (a unit breakdown on that here) because the goal isn’t to make money fast, but to make more money through much better engagement. In fact, games like Homescapes rarely use rewarded ads, opting for an in-app purchase focused model.

The more engaged a player is and the longer retention tail your game has, the more money you are likely to make via in-app purchases. This naturally means a higher average revenue per user, and this greater income will allow you to spend more on user acquisition to boost this virtuous cycle even more. 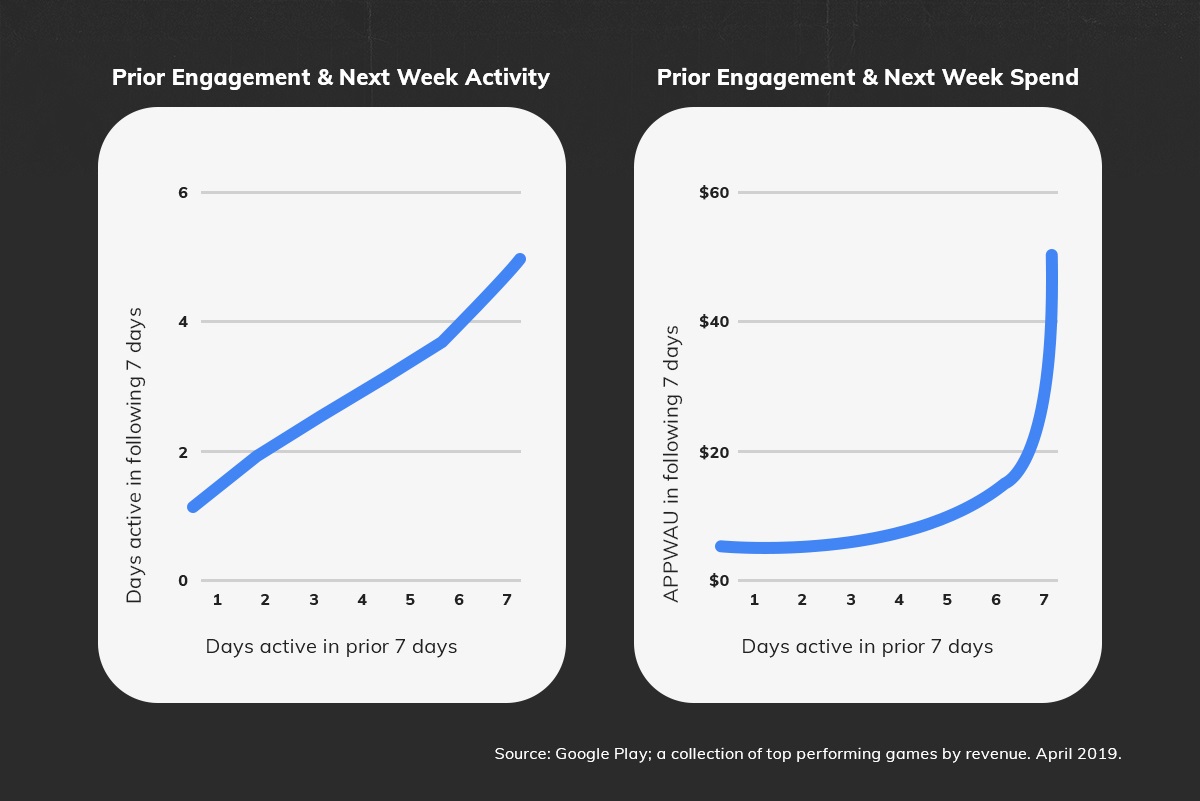 From a monetisation perspective, mixing genres is almost an arbitrage – the ultimate goal is to acquire users at a hypercasual cost (just a few cents) then monetise them as highly profitable midcore users.

The best of both worlds:

So what’s the future of hybrid genre games?

As we’ve said, hybrid games are great at standing out from the crowd. Here’s a quote from Dylan Bevis, Co-Founder of Featherweight to support that:

“Genre mashing is a great way to inject very tangible points of difference between your game and others in that same genre. By adding the zoo building metagame to Rodeo Stampede we were able to take what could have just been a subtle twist on an endless runner to something much more unique.”

With the breakthrough successes of games like Archero more recently, we believe that cross-genre games will become more and more successful in the future as publishers experiment with them. Whether they’re experimenting to make themselves stand out in a saturated market or to pull in more revenue, the results will be the same.

That will mean a larger gaming market for more committed genres as casual gamers explore midcore a little more.

Even though these gamers will be migrating upwards through complex game genres, this combination of a casual genre and a more mid-core genre is unlikely to change. There are a lot more gamers out there to reach through casual mechanics, and these games can engage gamers of every level.

Thanks to hybrid games, the future will include more gamers playing more games, and that is the ultimate goal of our industry as a whole.