The hypercasual market is an incredibly fast moving one, with new titles reaching the charts every week as old ones are often forgotten. And yet despite that volatility, it’s a genre that creates incredible revenue (upwards of $600 million in 2019 alone), and one whose games are so addictive and engaging that they consistently appear in those top charts month on month. 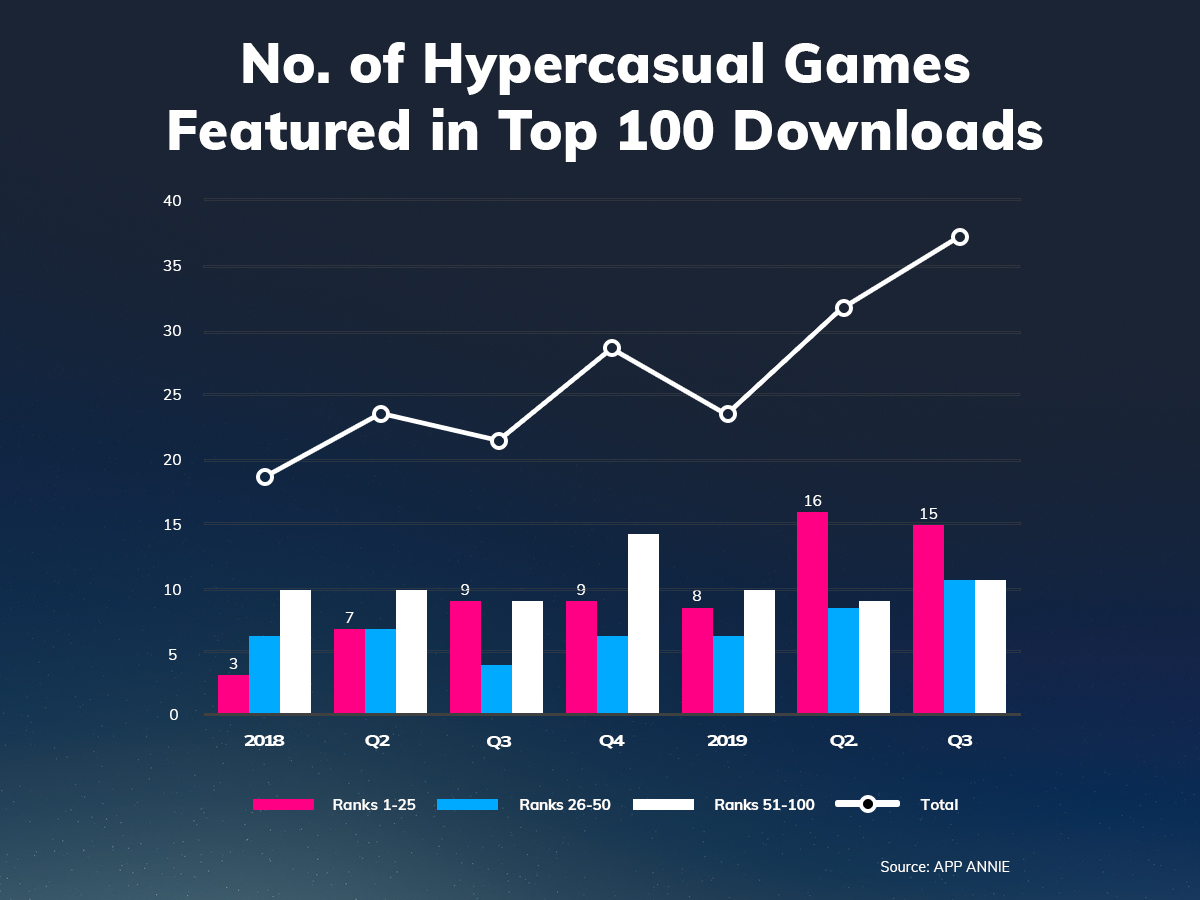 The greatest benefit of hypercasual games are how accessible they are. With simple mechanics and appealing graphics, they’ve opened the gaming market up to non-gamers. People who just want to fill a spare 5 minutes just as they do with social media, even if they don’t think of themselves as gamers.

We’ve actually spoken about this fascinating niche before across many articles, the main one being here where we talk about the future of the genre in general. With growth slowing down year on year, some sort of innovation seems likely.

In short, these games are either going to grow more complex and mix features with mid-core titles to create longer retention and more monetisation opportunities, or they’ll grow even simpler (ultracasual) and look to monetise every user even quicker.

But why is it having to change at all?

A quick recap on the unit economics of hypercasual games

As we laid out in our previous article, the best way to understand the current state of hypercasual and where the best innovations are we need to look at the business model on a per-unit basis.

Basically this only works if the cost of acquiring that user is less than $0.20, but the average cost per install (CPI) for mobile in general is $2.37! So Hypercasual had to crack cheap acquisition to make their unit economics work.

This model is effective, but just because something works doesn’t mean that it can’t work better. Player churn is still a big issue within this genre, and if you were to look at the reviews section of any of these games you would quickly find a possible culprit for why.

So it turns out that people aren’t huge fans of ads. Who knew?

Why are people so sensitive about ads in hypercasual games?

Okay, that sounds like a silly question but stick with us.

The obvious answer can be found in the unit economics above. The hypercasual industry doesn’t expect players to stick around for too long, so those 30 – 50 ad impressions have to be delivered as efficiently (and quickly) as possible. That can be unsurprisingly overwhelming for some players, which pulls retention down.

That’s a big reason, but we like to always bring things back to player psychology in these articles too. Understand the players, and you can understand how to monetise in a way that makes both the devs and them happy.

In a report from Facebook, with contributions from GameRefinery, titled Genre and Great Games, they go into some interesting detail on self-reports of why gamers play hypercasual titles. Here are their results for just the UK (as it’s where we’re based, and as it’s similar to other territories): 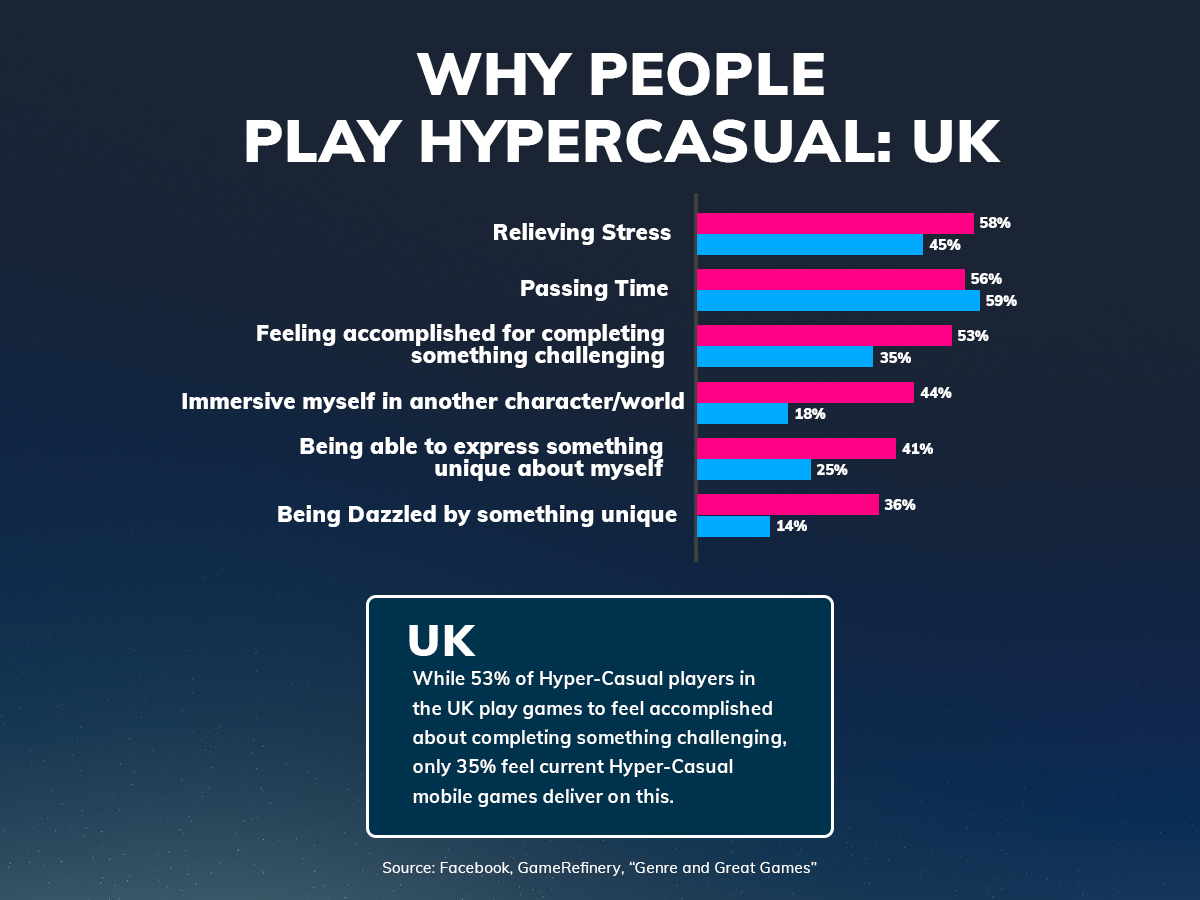 We spoke about passing time in detail in our last hypercasual article, especially in how hypercasual games are competing with social media for our brain space. This time, let’s talk about the even bigger motivation for these players: Relieving stress.

Just as social media is meant to ease stress but actually causes it through FOMO, hypercasual games might be a source of stress through ads causing almost 40% of users to drop out. Those players might convert to other hypercasual games a few times, or transition to another genre, but it’s fair to assume that some might return to social media instead. 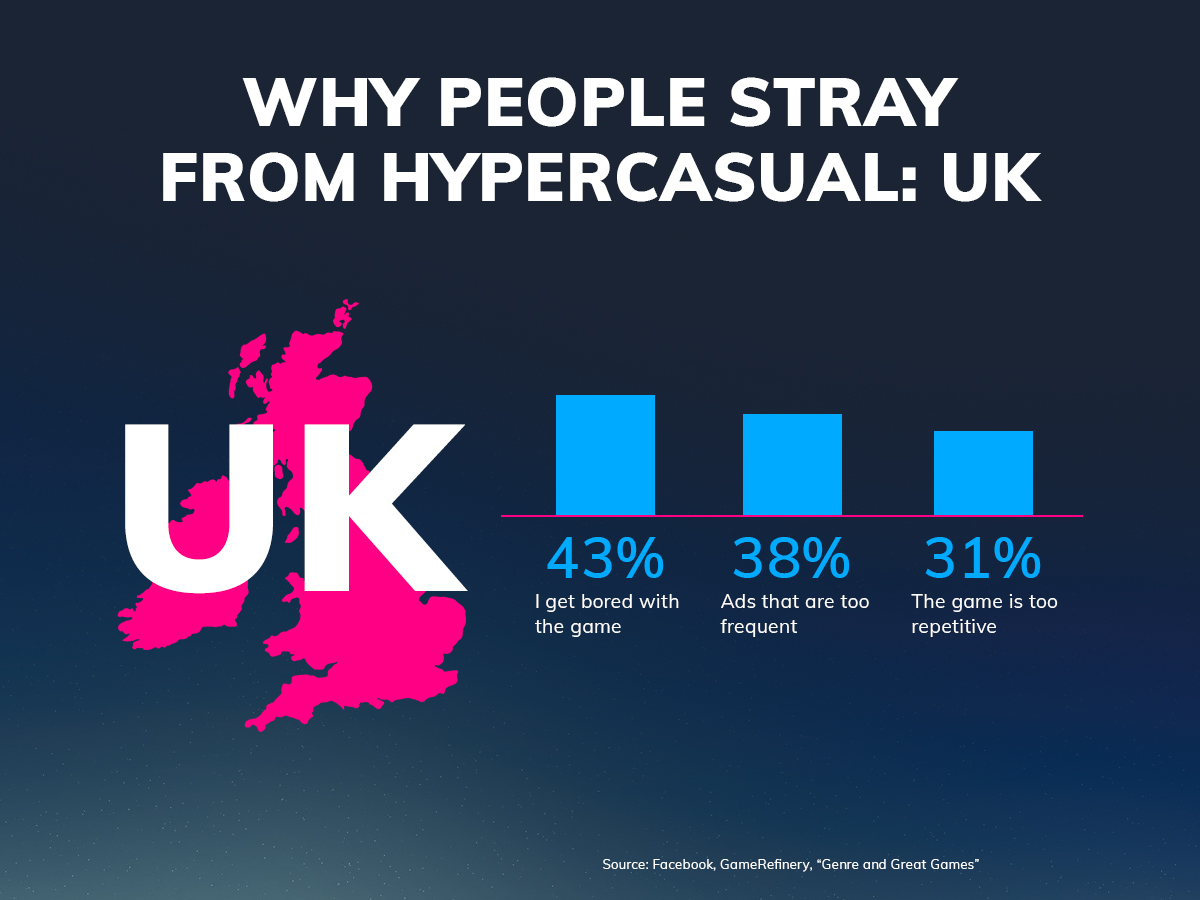 In other words, there’s a large subset of players whose motivational needs are not being met by hypercasual as a genre, and that’s awful for retention. Worse, it might turn these users away from gaming altogether.

Between this motivational discrepancy and the large amount of ads that publishers have to show to even make a profit, these games might turn off as many players as they don’t affect at all.

Publishers can’t show fewer ads though, so this retention hit seems like a necessary evil.

The current model of hypercasual advertising is reliant on in-your-face interstitials – usually 30 second video ads between levels or attempts depending on the game design. Throw in a little sprinkle of banner ads, maybe even a dash of rewarded video depending on the game.

That mix is a high profit one, but can sometimes mean that players see more ad than gameplay in some instances.

In other words, these ads are intrusive. They’re taking over the game more often than these players are hoping, contributing to that high churn.

Non-intrusive advertising is a more player friendly alternative that allows publishers to show the same number of ads (while mixing with other ad types) while reducing the ad overload on the player.

In other words, you can monetise gameplay so that players are de-stressing while still supporting the publishers and devs creating this work. Even if that produced a tiny boost in retention, the increase in ads shown through both monetising gameplay and through more session times would massively boost overall revenue.

Yes, we are biased in this conversation as our own non-intrusive ad solution is something we’re very proud of. We support both still image and video ads, and we’ve found that they have zero impact on a game’s retention when used in game scenes. Walking past a billboard on the street doesn’t make anyone walk less, after all.

Our entire goal at Admix is to try and create a middleground between publishers and players so that both can profit (in their own ways) off of each other. In the hypercasual space, non-intrusive advertising provides a unique and huge opportunity for both sides.