2016 was the beginning of the age of data, and now data can change everything in your life. The restaurants you like, based on what’s suggested to you by your phone. The games you enjoy, based on interest algorithms on Steam’s backend….

And even what game you should make next regardless of your budget.

It’s telling that 90% of all data created has been since 2016 and that we’re projected to end up providing data to a device every 18 seconds in 2025 thanks to the internet of things.

With all that data comes knowledge. In-depth knowledge about what you like, what you hate, and the data can even identify you in VR by the very way you move your hands and head thanks to behavioural biometrics.

In today’s world, there’s no reason not to use that data to inform your decisions as a game designer. Even just looking at gaming communities or the Play Store gives you a good impression of what people want to play, and that is absolutely still data. It’s time-consuming though, and full-on market research can be costly.

If you’re on a budget and building your own game, here are a few pointers for how to choose what to make with a data-led approach:

There are a lot of data aggregation tools for the industry out there. Here are a few of the biggest with a very, very condensed review of each:

A popular app data intelligence tool with revenue and app usage information for a huge range of games and apps. It’s useful for seeing what’s currently doing well and predicting what genres or themes are emerging in the market.

The power of Apptopia is in broad market intelligence, and less so on any single app compared to competitors.

The premium versions of Apptopia can be pricey too, but there are demos for you to try out in the short term.

Nicely presented data on over 8 million apps and games. Another great option for monitoring what’s popular and what’s becoming popular and their slice and dice features to zoom in on data is nice for that too.

AppAnnie is really very good for per-app data, but less strong on their broad market intelligence.

There is no free trial, however, and some useful features like download and revenue statistics are only in the premium version.

This is a great tool for monitoring keyword trends in the App Store. You can see what keywords currently released apps are using (great for your own marketing further down the line), and some interesting metrics like publisher worth to show you who the major players are in any given genre. It’s also great for nitty-gritty marketing insights, like finding where publishers target specific ads.

Their free version is decent for keyword analysis, but a lot of features are paid only and locked behind different premium packages. That said, sometimes keyword analysis is all you need.

Each of these tools has their strengths and weaknesses, and it’s in using them together that you get a really good view of the market as a whole. You can make huge progress and get insights on what kind of game you should make with any one of them, and how many you use really depends on how deep you want to go.

But without further ado, here’s our 5 step guide to choosing what game to make next,

Step 1 – Make sure you have a chance in the niche

Mobile gaming is well established by this point and we are no longer in a position where anyone can succeed in any genre. Unfortunately, there are a lot of ‘winner-takes-all’ niches now which are dominated by one or two games, and most people simply don’t have the resources to overthrow them.

For example, if you’re putting out a creative sandbox game you’re competing with Minecraft, a titan in gaming as a whole let alone on mobile. If you want to put out a match 3 game, you’ll have to face Matchington Mansion which has already exceeded $100 million dollars. 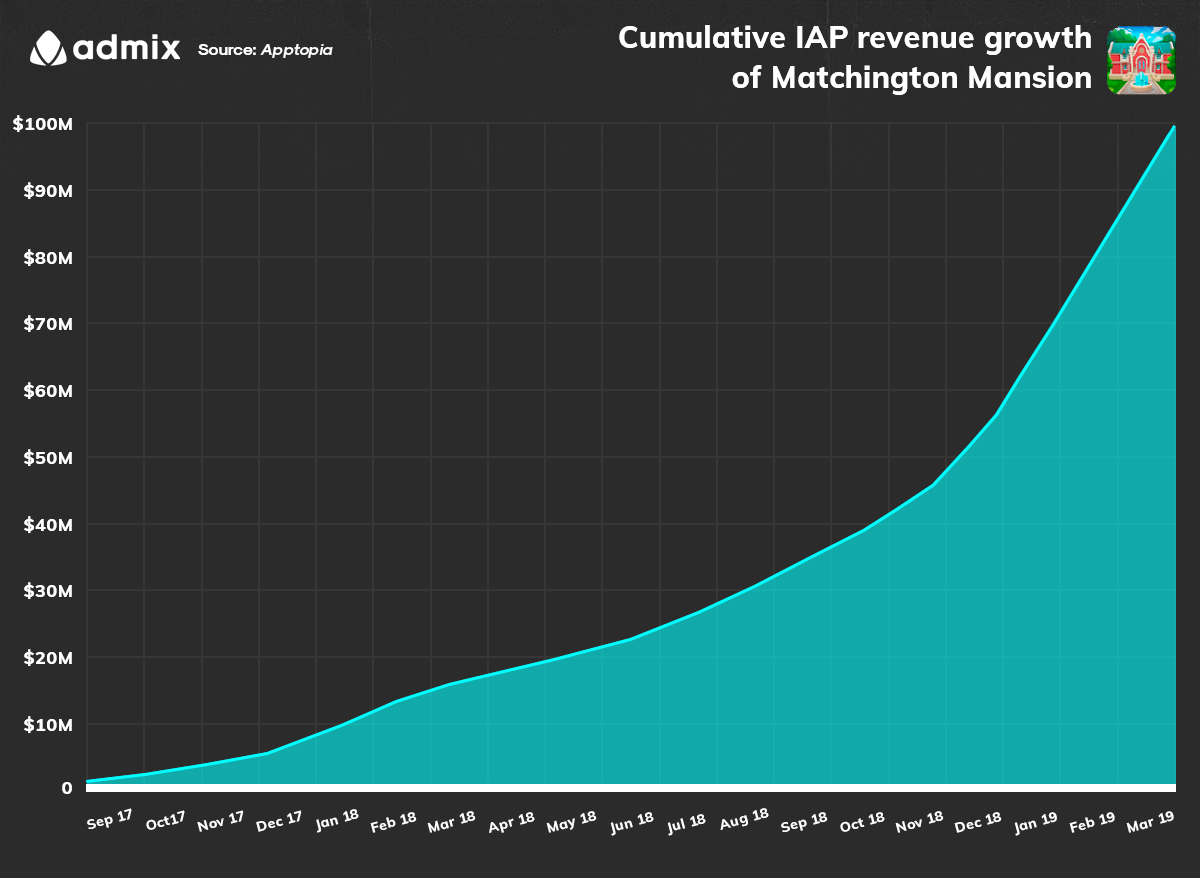 Of course, the benefit of the data tools listed above starts to shine here. While Matchington Mansion is huge, it’s market share isn’t evenly distributed across countries. Apptopia reports that the majority of their audience is in the US (52.5%) while a vast minority are in the UK (5.3%). An aggressively marketed UK focused game could be viable as a next game idea, for example.

That suggestion is without looking at competing match 3 apps and doesn’t change the fact that saturated genres will always be harder to crack than up and coming ones.

To avoid huge ongoing investments and initial marketing costs, we’d suggest finding a niche that isn’t ‘winner-takes-all’. If there are some clear big names in the niche but there are still lots of apps with over 100k downloads, that’s a good sign that you’ll still have a chance in the niche because players are clearly branching out from those leaders.

2 – Does that niche get a lot of organic traffic?

So you’ve identified a few niches that look good. They have a fairly open playing field in terms of competition and they interest you creatively, so what next?

Now you need to figure out just how niche they are.

To do this use AppAnnie and Sensor Tower to track how often and what people search for in these niches. Look at apps that are doing well and monitor their usage and the keywords they’re using to guide that research.

This is an important step, especially when on a budget. If the niche you’re considering doesn’t get much organic traffic then you’ll be spending a lot of money on marketing and user acquisition when organic traffic and discovery could cover a large portion of that.

3 – How does the niche monetise?

Time to get into a deeper analysis of the interesting niches, this time to inform what kind of game to make within that niche and how to make it profitable as a business.

Have a look at games in the genre, and this time download a few of them yourself and take a look at how they’re being monetised. Do they use a lot of interstitials? Banner ads? In-app purchases with fewer ads? The answer can really inform where you go from here.

For example, if the popular apps in the niche all rely heavily on in-app purchases then their lifetime value per user is probably quite high (which you can verify using the tools above). If their lifetime value is high then they can probably afford targeted user acquisition, so you might be bought out of the niche before you’ve even started.

If the niche has a lot of hypercasual apps inside it, you’ll have to take a completely different approach. Because these games are less targeted, user acquisition tends to be cheaper so they’re often full of ads to monetise players fast. The games are made and released just as fast though, and trends come and go. While a more cost-effective option, be prepared to develop something quickly to capitalise on a potentially short-lived trend and make sure you follow the other advice in this article to avoid wasted time.

Ultimately, this and step 2 will help you know if you need to/should/want to spend money on user acquisition for the niche you’re looking at.

4 – If you’re spending money on acquisition, how much should you spend?

Another key step from a broader business perspective. Make sure you look at the cost per install of your chosen niche to see if it’s financially viable for you to tackle.

Strategy games, for example, tend to need highly targeted ad campaigns and that will always cost more. Sometimes up to $8 if your game’s niche has a smaller pool of players. The industry average right now is around $2.37 in the US, but hypercasual games – with their broad and untargeted advertising – often costs as low as $0.20 per install.

Strategy and mid-core games tend to rely on lifetime value through in-app purchases because of that large initial cost. They need to earn on average more from each user than they’re spending on acquiring them. Plus, these games tend to take longer and cost more to make, so they may be a risky investment if you’re on a budget. Hypercasual is a little safer.

Of course, this is entirely dependent on the niche, so be sure to do the research or you might miss a golden opportunity.

5 – Are apps in this category often featured/trending?

Surprisingly, you actually want fewer apps in the niche you want trending in the top charts of app stores.

Generally, the apps that get featured have some sort of ad traffic directing users to them, leading to a lot of active players, a lot of reviews, and a lot of attention. It’s a virtuous cycle, but we’re working on a budget and can’t put a campaign behind our game.

If there aren’t many featured games in your niche, then you’ve probably found one that survives on organic traffic alone which is great because that’s what we’re shooting for.

With that in mind, it’s worth briefly mentioning App Store Optimisation, or ASO. This is like search engine optimisation but for app stores, and is the practice of making your description play to important keywords, your imagery looks premium and attractive, and metadata like the genre to be accurate and targeted correctly. ASO is a huge and important thing deserving of its own article, but this one is focusing on just choosing your next idea.

But don’t expect it overnight. When relying on organic traffic, it’s hard to predict when it will appear or when your game will be noticed. We would recommend saving some budget to put out initial ads which will hopefully spiral into larger organic growth, but this is dependant on the project’s finances in general. That’s why optimisation is key.

This article talks about using this data-led approach to choosing what game to make, and in their post-release phase, a simple change of the icon dramatically affected downloads. 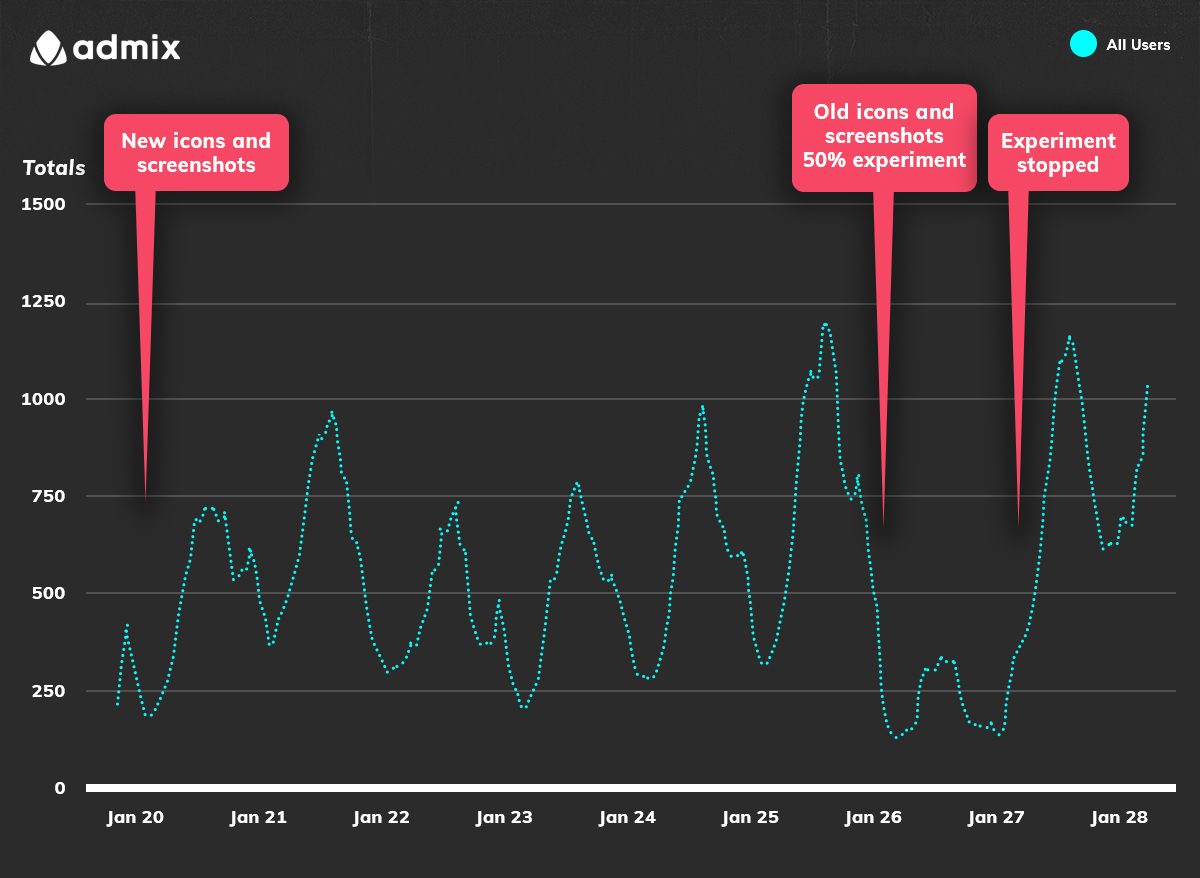 Making sure you’re targeting the right keywords, that any ads you have out are appearing in the right places, and – importantly – experimenting like the above article did will all help you maximise your reach in the long run. At this point, you’ll be following your app on the tools listed above, and tracking competitors who are doing well to learn from their techniques.

Data is a powerful thing, and the research stage of browsing it to choose your next game can’t be rushed. If you essentially want to make a simple hypercasual game (recommended when on a budget), the research will likely take significantly longer than actual development!

There will always be some level of luck in a game becoming successful, but insight-led approaches like this will let you minimise the need for luck as much as possible. If you set yourself up for success, you’re already ten steps ahead of the competition.

The active rise (and inactive future) of idle games