Games Plus – The future is interactive entertainment

All the way back in 2005, Microsoft had a dream to take a step away from games consoles and create a true media centre. A hub in your living room that handles not just games, but music, TV, films, social media, and every other entertainment need you might have. It took a lot of software updates to get there, but the Xbox 360 ended up being that dream and consoles were never the same again.

But we aren’t really living in a world of hardware anymore. The console wars are ongoing, sure, but they’ve changed completely (read about that in our article here), and people are increasingly buying digital releases over physical copies of games. And in this digital age, it isn’t consoles that are feeling the need to diversify, but the games themselves.

The rise of interactive entertainment, or “Games Plus”

Games Plus refers to the idea that games are becoming a medium for other kinds of entertainment more and more. As in, Fortnite is a battle royal game PLUS a social media-esque gathering space.

Fortnite is actually the most dramatic example of this phenomenon so it’s worth discussing it a little further. As you know, it started out by capitalising on the massive trend of battle royales, offering unique building gameplay and player customisation. With its accessible visuals and free-to-play structure, it skyrocketed in popularity to the point that 3.2 billion hours were played of it in April 2020. That’s 365,296 years. If that were one person, an early Stone Age human would have to play from birth and across many, many, many, many generations to hit those hours. 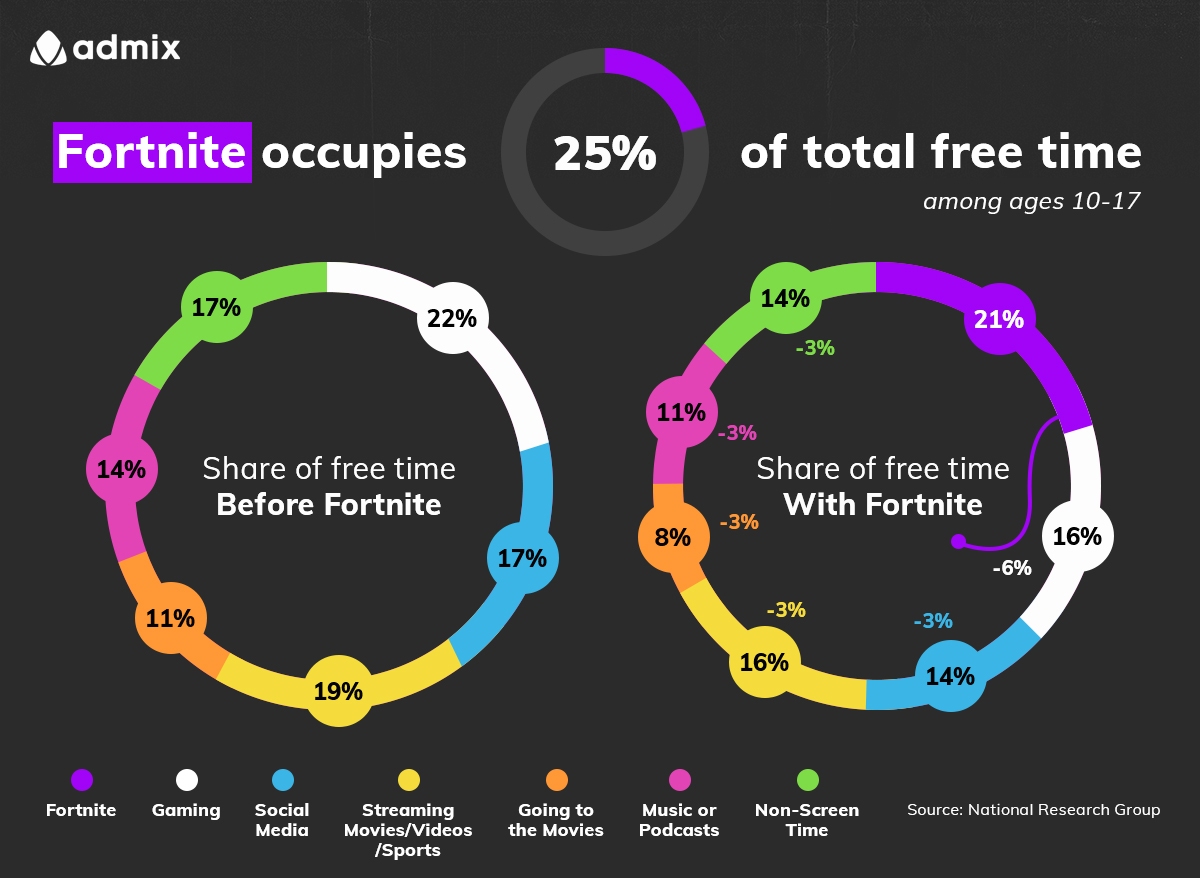 But the most interesting thing about Fortnite is that they listened to what their audience cared about. The customisation, the social interaction, the fact that teens are abandoning platforms like Facebook in droves. Fortnite introduced more customisation, brand partnerships (Air Jordan is a fun example), and added a social space with no guns or building that has seen huge concerts like the recent Travis Scott event.

Today, Fortnite has surged ahead of Netflix, Youtube, and Facebook in usage hours by teens, and players say that Fortnite provides the most positively impactful entertainment in their lives while traditional social media provides the least.

Fortnite is doing this so well that it’s a leading name in the ‘metaverse’ conversation, a belief that media will converge with reality and games will surge ahead as complete entertainment experiences. A great article on that can be found here, and the desire to create a metaverse complete with content is a prime reason for Roblox to invest so much money in its UGC teen creators.

In other words though, Fortnite responded to the market and became more than just a game. It became a Game Plus; interactive entertainment, which is a highly popular phenomenon today that’s flying under the radar.

Games Plus in the market today

One of the most striking examples of this trend is in story games. The actual presentation of this genre varies massively, but the core of every one is interactive fiction. Not a traditional game in a market flooded with simple core gameplay loops, but still aiming to deliver digestible entertainment experiences in whatever spare time a player has.

In 2018, the top seven stories titles generated about $14 million from in-app purchases alone. 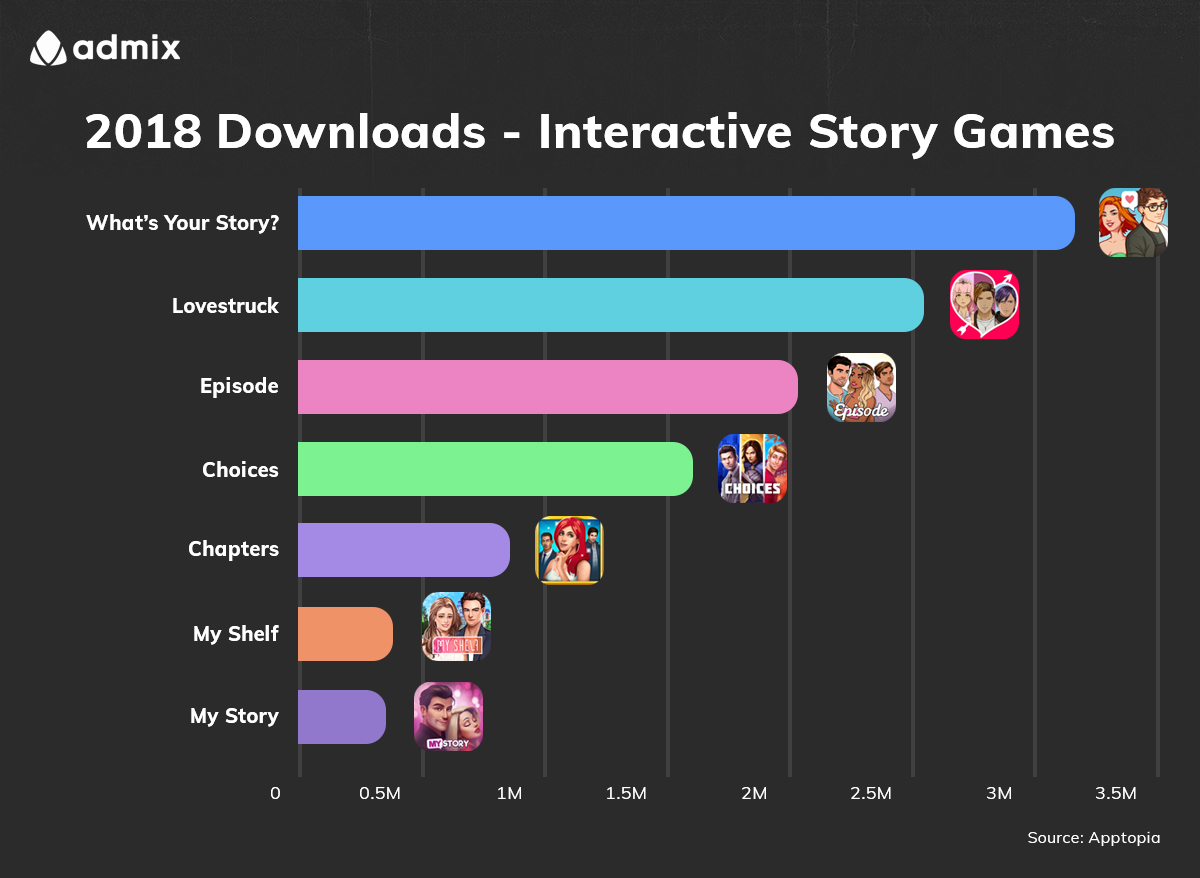 Games like Episodes clearly show how revenue like that can be hit so easily, though in a fairly controversial way in the game design world. Like any Choose Your Own Adventure game, decision trees will often branch off but – at the most opportune time – the option most players are predicted to want to choose will cost real money. Essentially aggressively aiming for that impulse purchase money from a teenage market who can’t control impulse as well.

[Credit to this fantastic article on Episodes from UX Reviewer]

Everything in this category is a Game Plus narrative experience, but the greatest power of it as interactive entertainment is in the user generated content. The most popular games in this space allow users to write their own narratives and comment or share other people’s stories. This creates an endless pool of stories for players to read, creating an experience unlike a book or article which is inherently limited AND more expensive (ignoring optional in-app purchases).

This is a great example of the IKEA effect too, in which something that you have a hand in putting together or making is seen as inherently more valuable to you. The creators in these games become dedicated because they’re making something and getting feedback on it, so they make more, so they feel happier, and the loop continues. Again, this is a unique psychological trigger for Games Plus that traditional entertainment just doesn’t have.

The IKEA effect in a game

Design Home is a really interesting example of Games Plus, because it’s so far removed from books, film, or other narrative experiences. It’s a game in which you decorate virtual rooms with virtual recreations of real products, like sofas and lamps. You can post those rooms to the virtual world and other users will rate your room, so there’s a competitive element too. In-app purchases give you virtual currency to buy more furniture, and it proves to be an addictive loop.

It’s a Game Plus interior decoration entertainment experience, and people love it. This blog post (I Can’t Believe How Much Money I’ve Spent on This Home-Design Game) is a really nice insight into the culture around the game and the mindset of people playing it.

The key takeaway is that it’s addictive, immersive, and allows players to live a version of reality that they can’t or don’t want to live in real life. That personal comfort is also found in Fortnite players, and is why Games Plus experiences are the future.

People want to feel comfortable and in control, and nothing gives that unique feeling like interactive entertainment. Not TV, not film, not music, not books, but games.

And will this trend continue?

People today are always connected and always moving. They’re always travelling, their thumbs are always tapping, and passive media is becoming less relevant. People are hungry for media that lets them create too, that lets them have a voice in what they’re consuming. That lets them create, and choose, and comment. Netflix’s investment in choose your own adventure stories shows the pressure that film and TV are under because of it.

Gaming mechanics are taking over all entertainment though, not just film and TV. Hooked is an app that gamifies reading by presenting it as a succession of text messages. Dating apps like Tinder gamify dating by adding a sense of chance through it’s swipe matching mechanics. Even to-do lists have been gamified by highly effective apps like Habitica, which treats your real life like an RPG.

That human need to have a voice is going nowhere, and the interactive entertainment industry is finally catching up and giving people that control. We’re very excited to see what kinds of games come out of it.