Epic vs Apple – Can you trust this antitrust?

The dust has settled a bit after the recent major conflict between Fortnite creator Epic Games and Apple, but the feud is far from over.

If you’ve somehow managed to miss this over the past few weeks, Epic added a standalone store inside of Fortnite which allowed them to bypass the usual 30% cut of all in-app purchases that Apple takes. This wasn’t to line Epic’s pockets though – the direct store sold everything cheaper, framing Apple as the money-hungry bad guy in the player’s eyes.

Apple responded swiftly by removing Fortnite from the App Store and Google followed suit not long after.

Then Epic released a parody of Apple’s 1984 video (viewable below) which Apple famously made to oppose the idea of big companies controlling the masses.

Apple said that they would welcome Fortnite back if the direct store were removed, but a lot of other apps like Spotify and Match have expressed support for Epic. Now, Epic is suing Apple on antitrust grounds, Apple has straight out banned Epic’s accounts, and the world has no idea who to root for.

Why this is a complicated issue

On the surface, this really does seem like Epic is taking a stand on behalf of studios everywhere. After all, Microsoft chose to avoid the App Store with xCloud because of Apple’s policies, as did Google Stadia, and then companies like Spotify and Amazon struck compromises that definitely seemed to benefit Apple more than them.

To further push that David vs Goliath narrative, Epic has stated that they don’t want monetary compensation from this lawsuit. They believe that Apple’s policies and their anti-competitive attitudes to power cause genuine harm to the market and developers. AND this is following Tim Sweeney, Epic’s CEO, calling Apple ”greedy” earlier this year.

It’s also worth noting that Epic is a company and isn’t purely altruistic either. Earlier this year, Tim Sweeney criticised Apple in an interview with Bloomberg and expressed how much he wanted to open a standalone app store on iOS, just as they did with the Epic Games store on PC.

Worse, Apple has recently given emails in evidence of Epic asking for a special special revenue deal and being rejected before all of this happened.

This decision to fight from Tim Sweeney could be one out of anger or with money as a priority, BUT that doesn’t stop the fact that Epic is standing up for something that affects devs everywhere – unfair treatment between apps from Apple.

The real challenge in this whole thing is Apple’s major strike back at Epic, essentially not just banning Fortnite but all Unreal Engine accounts owned by Epic too. Since then, Apple has gone nuclear and terminated Epic’s accounts from the App Store which certainly feels like the final nail in the coffin.

With such a power move like that, where could this battle go from here?

Who needs who more?

This is an aggressive act by Epic and, from everything that they’re saying publicly and in legal reports, they want genuine change at a court level. They want Apple to be held responsible for milking users of what they consider an essential item (the App Store) as much as they can.

They also want to stop Apple’s practice of giving side-deals to certain apps out of fairness to everyone. While this may not be what Epic wanted at first, it would be a great outcome of this scuffle.

But who needs who more?

Money, in cases like this, clues us into the answer.

It’s true that Fortnite makes immense amounts of money between iOS and Android versions of the game. According to Sensor Tower, that number is over the $1 billion mark. In 2018, overall revenue for Fortnite was around the $2.4 billion mark, so it’s reasonable to assume that it’s much higher than that now. 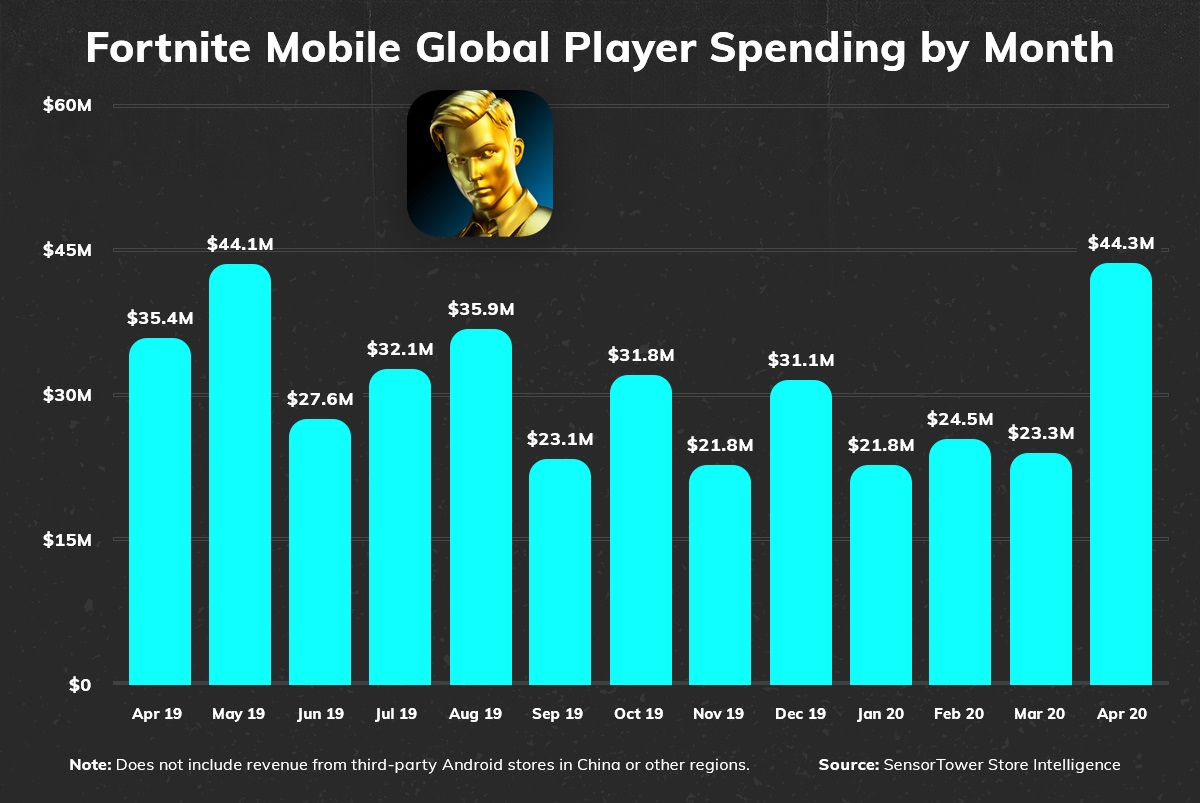 It’s clear that, financially, mobile revenue is a big deal for Epic and then there’s the element of their Unreal Engine accounts too.

Apple cleverly hide their App Store revenue in reports as part of their “services” bundle, including other things apps like Apple Music and Apple Arcade, but recent reports show that these services as a whole are a big part of their business – a $15 billion part in fact.

Further, Apple give (well, gave) Epic access to over 1B users worldwide and – as said above – help them to earn a lot of money, even with their 30% cut. And speaking of that cut, if we’re being conservative and imagine that Fortnite never made more than the reported $1 billion in 2018 (and that $1 billion was all iOS revenue), then Apple made about $420 million from Fortnite themselves. A drop in the ocean for Apple.

And, just to really twist the knife, while both companies seem huge to you and me, Apple is literally 117x bigger than Epic ($2000B vs 17B). The very fact that Apple wouldn’t make a special deal with Epic shows that difference – Amazon is 100x bigger than Epic, and Spotify is 10x bigger. If Apple were a country, it would have the 9th largest in terms of GDP 🤯

And Apple themselves have shown that they care about size – during his hearing with US Congress, Tim Cook said that all companies ‘satisfying the conditions’ would qualify for a special deal. Epic just doesn’t qualify.

Can you trust this antitrust claim?

Here’s the thing, 30% is a big cut but – at the end of the day – Apple has created an amazing platform. It’s a market worth $100 billion a year and one that enables hundreds of thousands of devs and companies to make a living in a way that just wasn’t possible pre App Store. They own this infrastructure, so it’s not anti-trust in the way they use it.

It is a free market and in theory you can create your own smartphone line, or your own custom App Store to compete – as Sweeney seemed to want to. Many have done so in Asia, with OneStore taking only 5% commission to try and compete with the incumbents. Last year in Korea, OneStore drove more downloads and revenue than AppStore, second only to PlayStore. Sure, they are backed by SK Tel and raised over $100M to get there. But the fact that Apple is a tough competitor alone doesn’t make ground for an antitrust case.

Moral responsibilities from Apple aside, Epic are simply in breach of the Apple Developer Agreement they signed to publish on the AppStore so have zero ground in court and they know it.

Look, at Admix, we are all for developers, but we also realise that distribution is everything and the App Store has done an incredible job at making this possible. Granted, it is harder and harder to get discovered organically, and we support the ideology that Epic is trying to promote – that developers are the life of the store and should be rewarded well. However, from a factual standpoint, we just don’t see how Epic can emerge victorious.

To us, the next steps seem pretty clear: Apple will stand firm and Fortnite will quietly make the change they need to get back to iOS and avoid a bloodbath. However, from an ideological standpoint they’ll be remembered as David vs Goliath, fighting for the dev community. They’ll gain the people’s support, and may be able to spark a conversation about revenue cuts much much further down the line.

BUT that’s assuming that Apple are kind enough to even let them back on the platform, which is the biggest question that we’re currently debating internally ourselves.

The philosophy of Epic Vs Apple

At its core, this is a battle of morals and ideologies. A battle over who deserves to control the actions of a marketplace; the marketplace’s creator, or the people that sell, buy, and live in that space.

This is a debate that philosophers and politicians have been having for generations, but high profile cases like this bring that argument to the spotlight.

No matter what the results, the increased awareness of fair treatment for developers will be a great result alone and hopefully shape the industry for the better one way or another.

Brand ads vs Performance ads, and standing out in the adpocalypse