Do you worry about monetising your game?

Not just the elephant in the room, but the 12-wheeler that crashed through the living room wall. Like the elephant, devs aren’t really talking about it either. Just eating cereal and maybe saying “do you feel that draft too” as if there wasn’t a hole in their house.

The point is that we see developers feeling sick about monetising their game everywhere we look. Feeling bad or anxious like they’re doing something dirty. So – first things first – you’re definitely not alone.

Second, let’s face this uneasiness and talk about ways to get around it.

If you want a bit of good news before we even start though, how about this: players don’t dislike ads, they dislike bad ads, so there are definitely ways that devs and players can both win.

Screenshot from the brilliant “Adventures With Anxiety“

Why does talking about monetising games make us feel odd?

This is more towards smaller indie devs rather than devs who have done a lot of business work on games before, but even those business-minded devs can be plagued with doubts too:

For a great overview on that last one, we encourage you to watch a talk by Crystin Cox of PlayFab called ‘Ethical Monetisation’.

The short answer to all of the above though is that most devs don’t create games with monetisation in mind. They’re artists, or programmers working on something out of passion rather than a hunger for business. Your expertise as a dev is making the best game you can, and going into this unknown territory is scary.

Then there’s the horror stories online of players upset with a game’s monetisation. Even you have probably had a moment when a popup ad or something has left a bad taste in your mouth, so worrying about you doing that to your audience is natural.

The bad truth is this: the way that you monetise your game will absolutely have an impact on your players. You can’t stop that.

The good news is that there are many ways to make sure that the impact is a positive one. Plus, there are ways to make monetisation part of your creative process too. 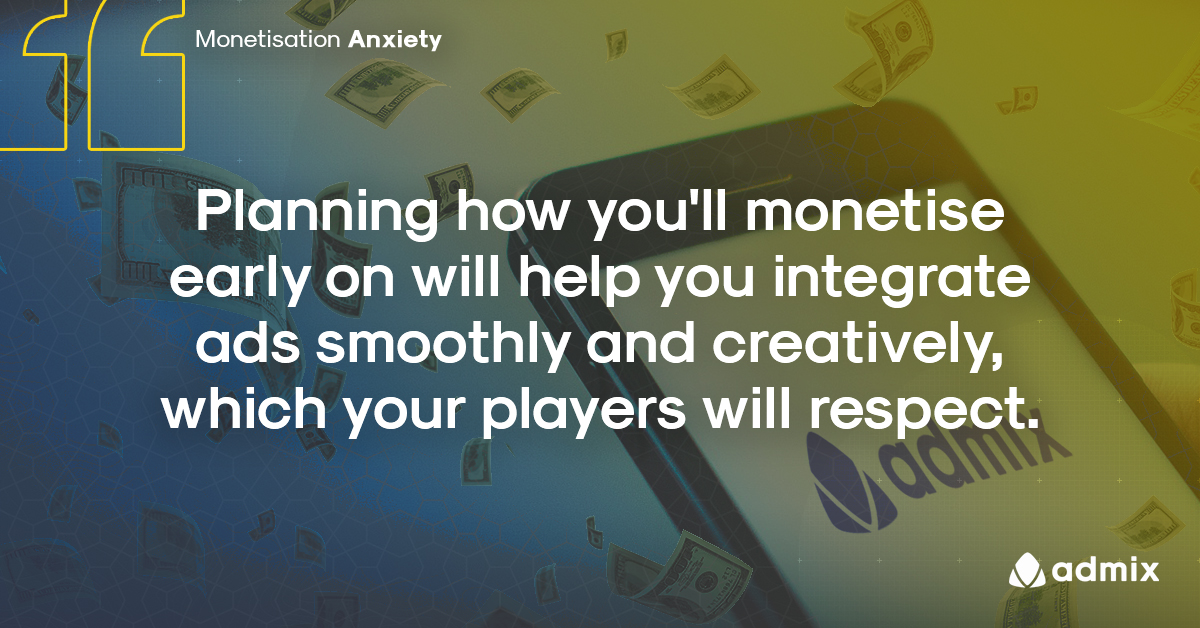 One of the best ways to make your monetisation better for players is by making a monetisation strategy as early as you can.

Sounds boring, we’ll be the first to admit that. And members of our team have definitely procrastinated doing the boring parts of game dev for as long as possible (and they feel very bad about it too…), but it’s worth doing for two reasons:

Admix was actually founded on the idea of making monetisation creative, so we’re pretty passionate about that second point – and your players will be too.

Better integrated ads reduce player churn, and ad caused churn is our Sephiroth. Our Bowser. Our ultimate enemy, because ads should not distract that much from your game.

It’s hard for us to just tell you what to use because there are so many ad types out there that benefit different types of game.

What we can do is give some recommendations based on our expertise.

First things first, here are some things that will influence what ad types you use:

There are lots of guides out there on different monetisation methods, and we even have one on our very own blog.

It’s actually good practice to use more than one monetisation method too to maximise your revenue, but – as always – make sure you’re putting players first with the ones that you choose.

Here’s a whip through explanation of some common types and broad thoughts on their usage. Please do some further reading around them if you’re thinking of using them though.

Ads that are constantly on screen. They generate low revenue, are fairly annoying, and… Look, it’s 2020. Please don’t use banners anymore.

Full screen videos shown in between levels or matches. Very disruptive as they take over the screen, but they generate decent revenue. Use too many and your players will be unhappy.

Full screen ads that a player actually chooses to watch in exchange for a reward, usually a loot box, coins, or something cosmetic.

This one is pretty dominant in the industry and 75% of players have named it their favourite monetisation method. Even so, adding too many in one session can make churn shoot up – no one likes a ‘watch-to-win’ game. Still, these are player tested and very effective.

Ads that act like product placements inside your game world, like a billboard, magazine, or can of soda.

This format is flexible, not intrusive at all because the ads are part of the game, and very creative for you the developer. You can design around them and apply shaders and lighting effects however you want.

Plus, because they’re non-intrusive you can add between 3x to 30x as many ads per scene and generate revenue accordingly. In-play ads have also shown players sticking around for up to 4x as long as intrusive formats, and… Okay, sorry, we’re very passionate about them

In summary, use more than one ad type. Use in-play ads if you can (yes, we’re biased). Integrate ads in ways that reward players or that don’t interrupt their experience of the game.

Do those and you’ll be monetising without feeling like you sold your soul.

Because we’ve committed to a meme format in our subheadings at this point, this bit is used for a couple of final tips:

Monetisation is something you can experiment with. Play with ad formats so that you get used to them, change your ad strategy if it isn’t working or – better yet – do a beta of ad formats early on to see how people feel.

Talk to your users. We know it might feel like asking a drowning person if they want some more water, but players are actually sympathetic for the most part. They’re investing their time into your game so they probably have an opinion on how you can support yourself through it.

Do talk to pros too. We’re always happy to give some advice, so feel free to contact us!

Once again, the fantastic “Adventures With Anxiety“

After that information dump, you may not be feeling too much better BUT you have taken the first step to seeing ads as an opportunity, not a last resort.

The reality is that monetising your game isn’t a bad thing. You’re not a monster for wanting to make money from your work, and – if you’re a dev with a business to support – using more ad types doesn’t make you the devil either.

There’s no reason to feel sick about using ads. Just give it a go, give it time, and follow the one golden rule: