iOS 14: a huge win for Brands and Consumers

In June, Apple announced the release of iOS 14, their latest software update that will be released in September. The main takeaway was their update to IDFA policies in which they now require users to give permission for tracking to happen. This alone has the advertising industry up in arms, and you probably have read many articles about ‘the end of advertising as we know it’ and other doomsday titles.

But fear not. While the end of the IDFA will certainly shake things up, it is undeniably a net positive for the industry. This article looks at the brighter side of this decision.

What is IDFA, and what’s changing UX-wise?

The IDFA (IDentifier For Advertising) is a semi-permanent identifier that Apple introduced in 2012 to enable marketers to measure attribution and effectiveness of their campaigns. It allows advertisers to track your usage across apps to know where users are coming from and where their ad spend is paying off. If you follow an ad for a game to the App Store page and download it, for example, the IDFA will list out your entire journey to the advertisers themselves.

iOS 14 is now asking users through a prompt like the one below if they actually want that tracker on, which is a pretty big deal. 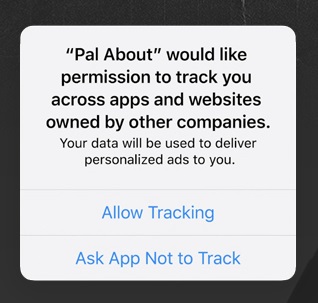 If you ask any average user, this is a triumph for privacy in a time where it’s at the forefront of people’s minds. With less tracking across apps, people can feel more confident that Apple is putting their user’s privacy first, BUT – importantly – Apple haven’t removed IDFA completely. It’s functionally far, far less valuable (who will actually tap ‘Allow Tracking’?), but advertisers can’t complain because it is still there.

It’s a win-win for Apple and the general public.

And, on the advertiser front, there’s a good chance that their concerns are premature.

The ability to efficiently track users and attribute downloads has, without a doubt, been responsible for the growth of mobile gaming revenue. Currently, the vast majority of mobile app advertising spend involves performance ads from other apps trying to acquire users – with games taking the majority of it as ad revenue.

Therefore, for game studios, iOS 14 might seem like a scary change. After all, without the ability to retarget and attribute downloads to ad placements, user acquisition is going to be much foggier than it once was which means less ad spend and less ad revenue.

But this is forgetting an important piece of the puzzle – brand advertising. Stuff like the engaging and enticing video ads you see for Apple, Nike, or Coca Cola online or on TV. As opposed to performance ads, these advertisers are not looking for direct clicks, downloads or purchases, but to build brand equity. They’re focusing on making their ads viewable to the right audience, to remain front-of-mind to their consumers. While mobile gamers are less familiar with those ads while they play, brand advertising is a $200b a year industry led by the largest brands in the world.

Traditionally, brand advertising has been focused on newspapers, TV, and social media platforms and very little in mobile games itself. This is likely due to competitive performance marketers willing to spend huge amounts to reach users they could track as highly valuable. In a post IDFA world, this is likely to change.

‘The end of IDFA will be a net win for brands vs performance advertisers. Although brands do use the IDFA, its usage has been far more valuable for performance advertisers to understand who the “whales” are in gaming, creating lookalikes on Facebook and retargeting high-value users in eCommerce / Subscription products. The core performance KPI’s for a brand are viewability and hitting the target audience. With these as the KPI’s, brands have been less reliant on IDFA. I expect to see CPM’s depress as performance marketing becomes less efficient, providing a glut of cheaper inventory for brand advertisers to take advantage of.”

In other words, the end of the IDFA might open gaming as a new channel for brands who will now be able to compete to reach their potential audience while they play. And with 1.5B people globally being daily gamers, it’s a no brainer that their audience is playing – the key is simply reaching them.

Lately, more brands have been willing to ‘get in the game’ to reach that massive, highly engaged audience – exemplified by Louis Vuitton creating skins for Fortnite, Mastercard’s history in esports, and of course all the work we are doing at Admix. iOS 14 will contribute to speed up this rising trend.

And this transition from performance ads to brand ads will be a net positive for game publishers too. Paul West, ex-GM at Buildbox and now game studio owner at Fumb games, explains:

“As a small studio, iOS 14 is super exciting. I believe we’ll see more premium brand dollars flow into our games – and that will create a better experience for our players which can help retention. I also expect to see growth in new revenue streams like in-Play ads, plus other player-friendly ad integrations. It also feels like this change will help level the playing field for all UA teams big and small.”

Indeed, brand ads KPI’ed on viewability rather than clicks, are less intrusive – which will improve the end user experience. Compare a banner ad sitting at the bottom of your screen to a 30s unskippable video for a taste of what we mean.

Without the fear of competing against aggressive performance marketers, more money might start flooding into the mobile space, from a greater variety of brands whose spending power is pretty much infinite, and not directly tied to performance metrics like CPI or CTR. Losing IDFA might eventually result in a net gain for total revenue in the mobile market!

We also (unsurprisingly) believe that this limitation will push adtech to innovate and adapt in player friendly ways. Ad types that players aren’t annoyed by – like rewarded ads or in-play ads – will ultimately provide more revenue and be more appealing to premium advertisers looking to experiment with placements in games.

Stripping away a lot of the panic that we’re seeing in the space right now from advertisers, IDFA being made redundant is actually just levelling the playing field – which is nothing but good. It remains to be seen if the Google Play Store will eventually follow or instead capitalise on being able to track users to get a leg up against Apple.

While the transition period may be a little shaky, over time brands will eventually be able to compete for attention with performance marketers, studios will shift their KPIs, player-friendly advertising will become more and more prevalent, and some of the less nice side-effects of performance marketing like whale hunting will decrease.

All in all, this news is part of a trend to create an advertising model that works for users first – a model that does not require interrupting users to shove a brand in their face, nor require publishers to sell your data to the highest bidder. At Admix, we have been focused on building a better future for advertising for the past 2 years via our in-play format, so we are genuinely enthusiastic about the potential ad world that losing IDFA could create in gaming.

Understanding what motivates gamers to play