One of our main goals at Admix is to innovate on tired old advertising solutions and make them better for devs, better for advertisers, and – most importantly – better for the players actually seeing those ads.

You can imagine that we have some strong opinions about the advertising solutions out there right now, good and bad. After all, in order to look ahead you have to look at what’s going really well right now – whether that’s good user experience, something that devs love to use, or just a high CPM ad type.

The pros and cons of the common ad types like rewarded video (great!) and banner ads (oh God, why?) are everywhere on the internet, but slightly more niche options like offerwall ads just aren’t getting any attention.

An offerwall ad is a lot like a rewarded video. They’re both focused on non-paying users, they’re both something that a user chooses to see in exchange for an in-game reward, and they’re both full screen experiences that take over the game while they’re active.

Unlike the 30s unskippable video of a rewarded ad though, offerwall ads present the user with a bunch of choices. These can range from looking at another app on the app store, to reaching a certain level in another app (or the same one), to watching a branded video. The developer can choose these rewards and then can choose how much to reward each action.

IronSource are a great provider of this ad type and their image below sums it up perfectly: 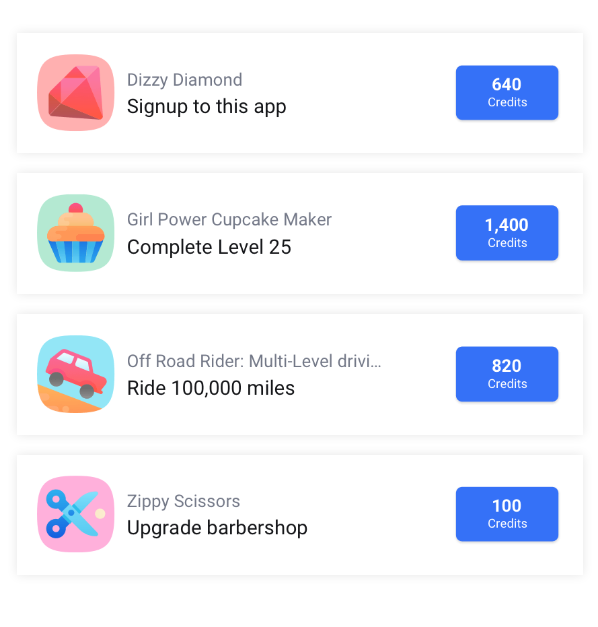 Some offerwalls are even gamified, including their own level-up systems within the menu itself which allows for bigger rewards to be unlocked at higher levels. Some developers use this ad type as a sort of progress tracker for players as well as a game monetisation tool.

Unsurprisingly, this doesn’t suit every game or every developer. It tends to need some kind of in-game currency – but you can reward cosmetics, lootboxes, and even temporary ad-free periods too – and it takes a bit of work to get it installed and working.

So is it worth it?

The most important thing in the good column here is that people do seem to like offerwall ads. Or at least, they strongly appear to.

Research from TapJoy shows that, when asked if they would keep playing a game after the offerwall were removed, 45% said that they would quit when they started running out of in-game currency. Of course, this is more them saying that they love the rewards not the system and the rewards could be delivered through rewarded video just as easily.

On that note, Unity’s research that showed that 71% of players preferred rewarded video over other ad types is relevant here too. They didn’t specifically ask about offerwall ads in that study, but the principle is the same: engage with this ad, get something back.

Logically, this would also suggest higher retention through the principle of reciprocity – we’re giving you something, you feel obliged to give something back by engaging with more ads or playing more of the game. Read more about reciprocity here.

There’s not much data on retention through offerwall ads specifically, but we can get some insight by looking at rewarded videos though. The answers are… surprising

So, first off, all providers of these ads say that offerwalls and rewarded videos give higher D1, D7, AND D28 retention. TapJoy has even found a 450% boost at D30 just by using rewarded ads!

Independent research from Game Analytics doesn’t quite support that though: they found a very slight correlation between engagement with rewarded video and retention. They concluded that people who are engaged with the game are more likely to be engaged with game monetisation methods, not the other way around. So why is this in the good stuff section?

Because despite the slight difference in retention, revenue was drastically improved. Here’s their data from before rewarded video were added and after: 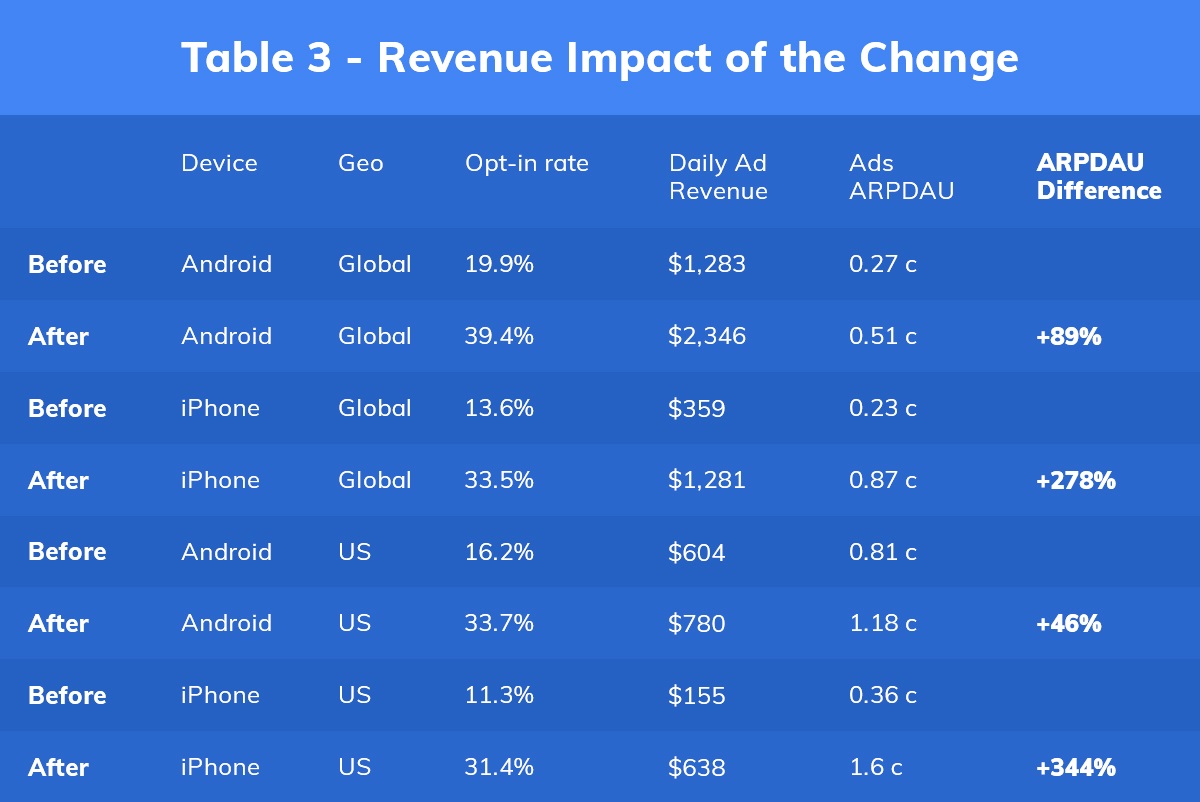 We can’t make exactly the same conclusions for offerwall ads. There is every chance that offerwalls give much better retention thanks to the motivational benefits of player choice (read more about that here) but we just can’t say for certain. We can assume that revenue will jump up though without hurting retention too much.

So let’s talk about revenue. 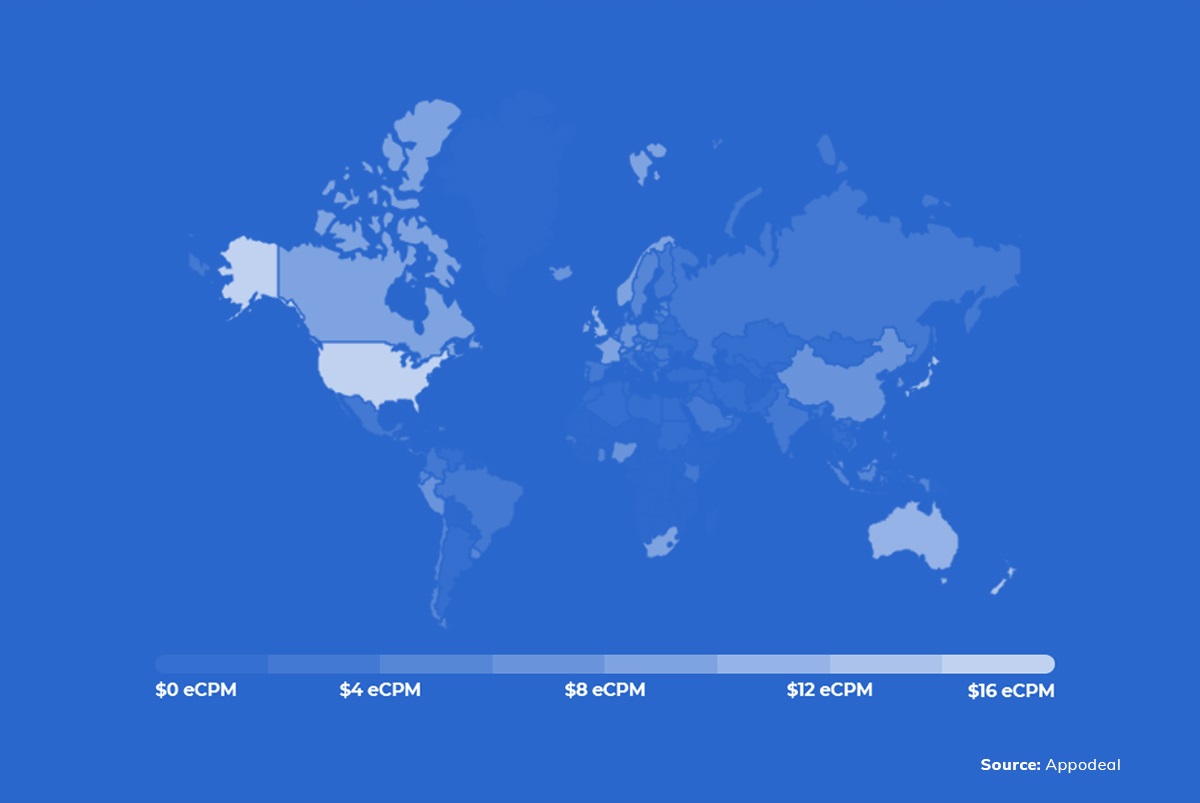 That’s a totally respectable and decent rate, but offerwalls manage to blow that out of the water.

OpenSource actually reports eCPM as high as $900 in long retention genres like RPGs! 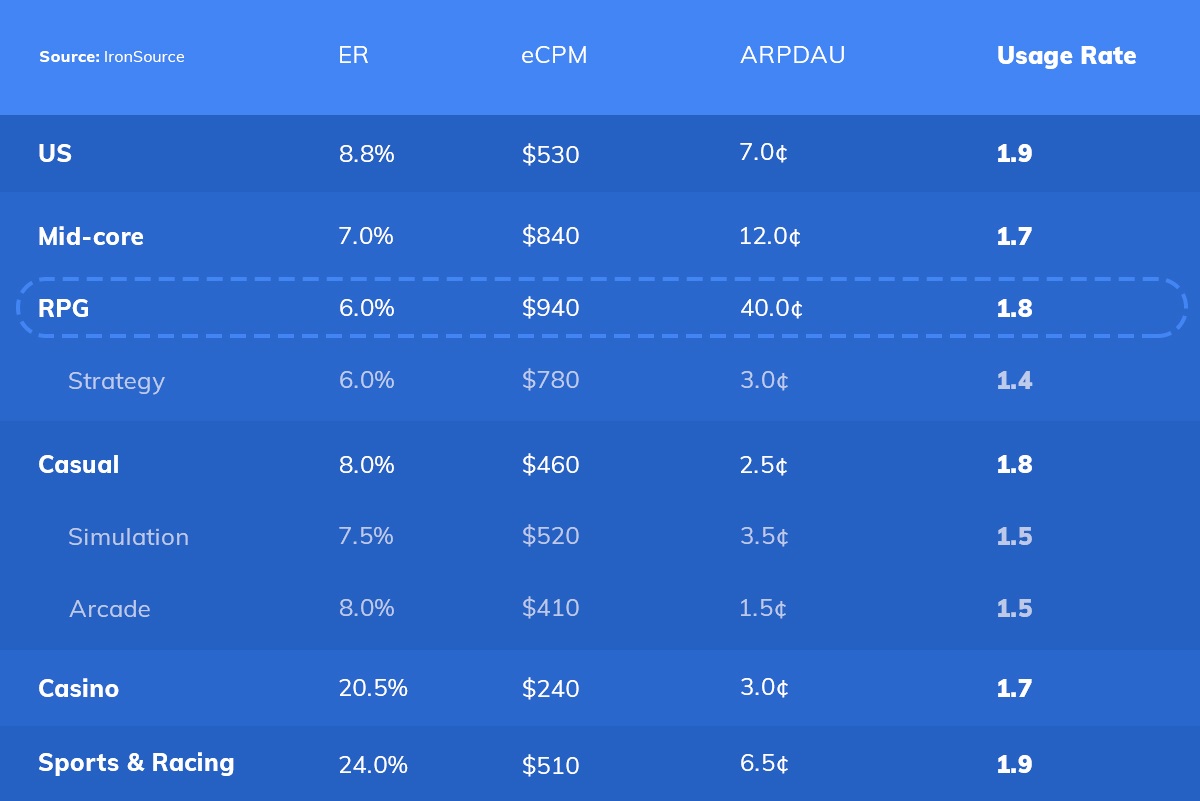 While we haven’t seen numbers quite this high, our own internal sources have seen eCPMs as high as $200 – still blowing rewarded video away.

There’s a couple of reasons for why this might be happening.

First of all, it’s an ad format that promotes deeper interaction with a brand than just watching a video. Being prompted to fill out a survey or download an app is the kind of engagement that brands will pay top dollar for.

Second, it’s actually a pretty uncrowded and non-intrusive ad type. While it’s not perfect in being a full screen experience, if the dev adds in-game goals alongside ad prompts then it does feel almost like another part of the game. Plus, with fewer devs actually using offerwalls in general it’s a less crowded space meaning better bang for advertiser buck. We see the exact same benefits in our own in-play solution, which we’re proud to say is even less intrusive.

The biggest thing to keep in mind with these numbers though is that most offerwall traffic is incentivised. The majority of people clicking a link in an offerwall are doing it to get the reward associated with it, which usually means that those customers don’t convert to sale after clicking through. This traffic tends to be less valuable to advertisers compared to non-incentivised traffic, so eCPM can either plummet suddenly as advertisers shift budget to a sales focus, or can fluctuate a fair bit in general.

All in all, there are still a lot of things in offerwall’s favour.

The biggest negative really is the work it takes to add to a game. It’s not drag and drop or no code like Admix’s in-play ad type, and devs actually have to specify rewards and plot out their in-game economy really thoroughly to make best use of an offerwall ad. In short, it’s a high effort kind of game monetisation.

The other major downside, as we mentioned before, is that they just don’t work in a lot of game types. Low-content genres like arcade and hypercasual struggle with offerwalls because they add a little more complexity to an audience that don’t even consider themselves gamers, turning them away.

Plus, some offerwall options like pushing users towards another app moves them out of yours. While the offerwall itself isn’t intrusive, this is probably the most intrusive thing you can do within a game – stop them playing it. The user might get so frustrated that they leave, or entirely convert to being a user of the app they’re linked to.

It’s also a little bit of a mind trick in terms of looking at your analytics – you’re likely to see great engagement, and advertisers are likely to see high CTR (again, justifying that high eCPM), but this is an entirely extrinsic motivation for the player. And it takes more work on their side than simply watching a rewarded video, so the actual user experience might be worse than you’re even aware of.

So are offerwalls actually good?

It’s a complicated one.

They’re a great ad type in terms of revenue, and if used very very carefully they can be pretty great for the user experience – which is obviously our priority as a player-first advertising company.

There are a lot of pitfalls though, and if you’re concerned about the amount of work it will be to implement or about how much your players would actually like it then it might be best to stay on the safe side.

On the other hand, if you’re in a genre with long tail retention like midcore or RPG and you’ve seen some nice results from rewarded video, then maybe now is the time to give this a go too.