Network effects are one of the most important success factors for a huge amount of games, but most game designers haven’t heard of them. This article is your one-stop-shop for the key information on network effects in gaming.

This article will cover:

What are network effects in games?

A network effect is when the value of a product (or game) increases exponentially for every new user.

Typically, the telephone, the internet, or social networks benefit from it – more users in the network means more value for everyone using it.

In games, many popular MOBAs live and die on the network effect. Every new player means more competition and variety in online matches, more players to be creating content around the game (guides, conversations online, artwork, etc.), more people to watch or contribute to esports, and the more people to buy and trade items using in-game marketplaces.

A game like League of Legends is significantly less valuable without its network of players. But with that network, it made $1.5 billion in 2019. 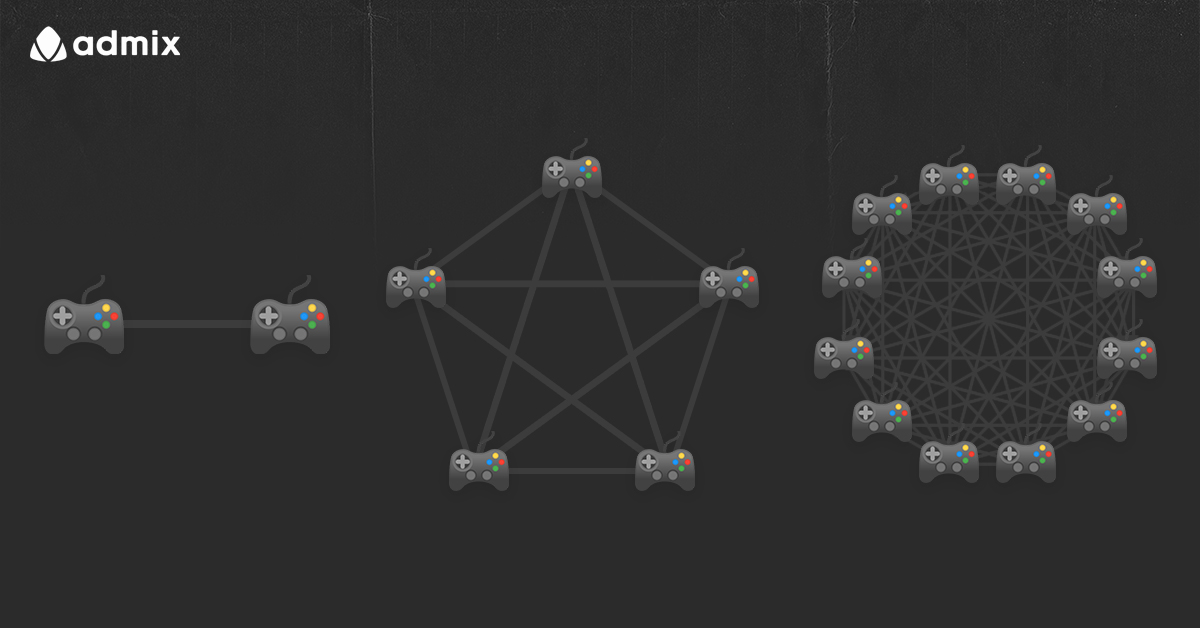 The importance of network density

More important than the amount of people (or “nodes”) in that network, is the density of the network.

A network’s density is simply how many links each node has to other nodes. The below illustration shows that pretty neatly, but it’s worth remembering that almost no network is “perfectly” dense. In other words, no network will have every node linked to every other node.

An example of clustering would be in social platforms like Reddit, where sub-communities are the main selling point. A new user in /r/movies increases the value of /r/movies but has no impact on the members of /r/cats. They are still increasing the value of Reddit as a whole though.

Inside games you’ll have dense networks of clans or parties, and around games you get groups of artists making fan art, or YouTubers creating lore content. Seperate sub-groups that create a richer whole. 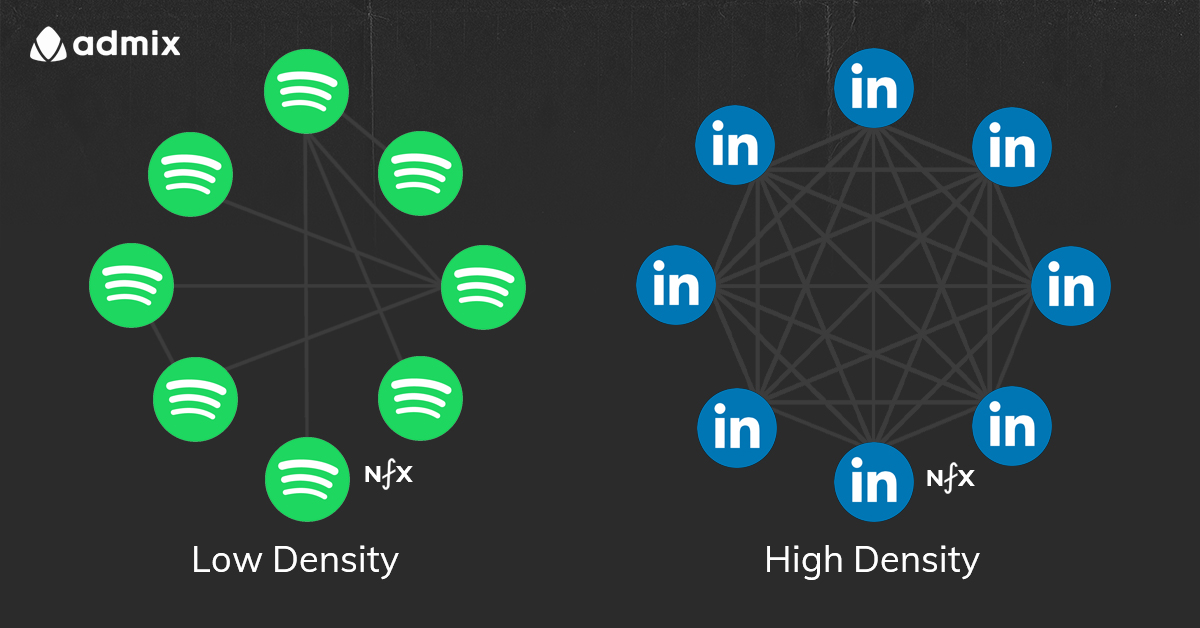 Types of network effects in games

When people talk about network effects, social networks like Facebook and Twitter are often brought up early and often. It makes sense because every new member of the network will be adding content to the platform, engaging other users, talking about the platform to friends, and seeing ads and generating revenue. It’s impossible to think of social platforms without those networks in fact and games like League of Legends are the same, as mentioned above.

You also see the power of social networks in games like Candy Crush, where your friends can give you lives when you fail a level. The power here comes from engaged communities: friends gaining value from more friends inside the game. When we help others we feel genuine pleasure, and that good feeling further encourages people to continue playing the game, creating a positive feedback loop on an individual level.

As a final fun fact for this section, social networks in online games are so important for both actual fun (variety of opponents) and for perceived fun (“I’m playing a popular game”) that many games in the .io genre fake online opponents in game and in marketing.

With some careful design, networks can create positive loops inside them that result in huge boosts to monetisation too.

Team Fortress 2’s Pile O’ Gifts, as one example, was an in-game purchasable item that, when used, gave a random gift to everyone else on a server. People loved when someone brought them and it tended to lead to more purchases, and this too is enriched with more people in a game’s network.

Then you have games like Game of War: Fire Age, where joining an Alliance (a social network) is pushed heavily. Players in an alliance can buy research and boosts to benefit their team, and the social pressure of not letting your alliance down is huge because of how competitive Game of War is. The more of these dense micro-cluster alliances in the game, the more competition goes up, the more purchases are made. The network size directly feeds into monetisation. 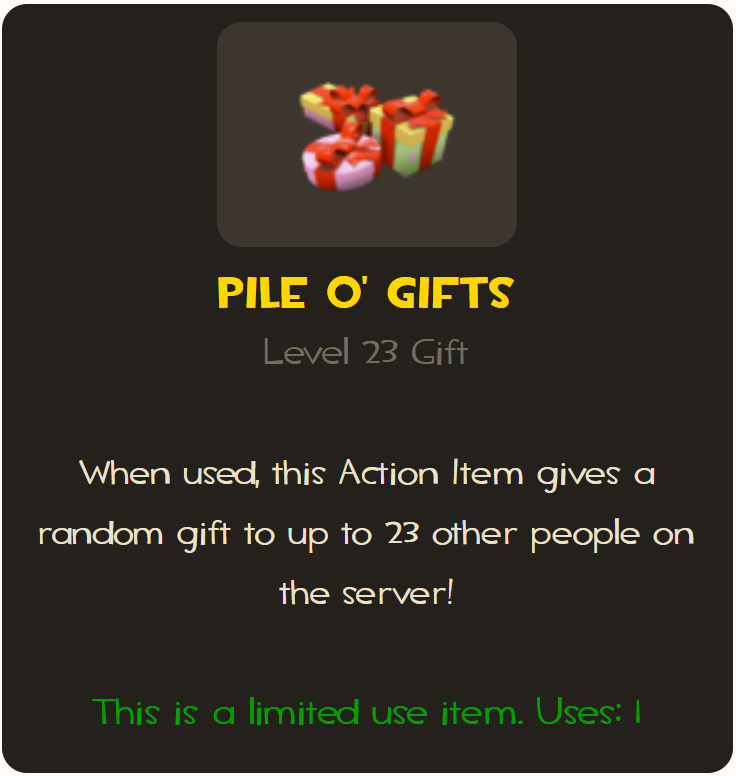 Network effects on acquisition shouldn’t be confused with virality. A game can be very viral, like Farmville where each user can invite more users, but have weak network effects. Each new Farmville user does not make the game much more valuable to existing users, as it is mostly played individually (except for the gifting system).

The power of network effects on acquisition are two fold here:

First, the bigger a game’s network of people, the easier it is to gain more players.

The bigger the network, the more visible the game is in organic rankings, so more people see it and decide to try it. There’s also an element of social proof – this game has many players, so must be good, right? It’s a virtuous cycle that can lead to incredibly cheap acquisition.

Secondly, network effects are amazing for cross-promotions. The more players in a game, the more people you can advertise another game you’ve made to and carry them over there. That way the network is never broken when players stop playing, it just shifts to another game. Don’t grow the game, grow the network.

And that power of cross promotion and social proof is how hypercasual studios like Ketchapp or Voodoo became so popular. The real network is across all of a publisher’s games, and a lot of work goes into keeping players in that company wide network and not necessarily in any one game’s network.

Finally, we are living in an age of data and networks provide a lot of data.

As more players join a game, publishers get access to more data about everything from gameplay to marketing preferences, and especially about user acquisition.

This data lets publishers optimise monetisation, marketing, gameplay mechanics… Almost everything they could want, and more data is always better. Every new user that joins adds a little more insight that makes user targeting a little better, and so on.

The real power of this data is when you add advertisers into the mix. The more players in a game’s network and the more data being gathered on their preferences, the more valuable that game becomes as advertising space.

Scale that to billions of people, and you create almost invincible networks like Google’s and Facebook’s with hundreds of data points about all of their users. It’s easy to see why they capture 70% of the world’s global ad spend.

This entire article so far has actually explained why so many mergers and acquisitions have been happening recently.

Because large companies want these networks.

Applovin purchased MachineZone, makers of Game of War: Fire Age this year. The value of the company and the skill of the game designers were definitely a factor in that, but it is the highly dedicated network of players that MachineZone has that was worth the $500 million spent.

The data from those players, the social connections, the cross-promotion… After acquiring these networks, companies can reinforce all of these by combining their data and resources to massively boost their company-wide network in a short time frame.

Plus, the network effect is one of the greatest defensibilities any digital company can have right now. Primarily because defensibilities are in the network, not in the tech. You could throw dozens of engineers at creating a perfect replica of Twitter today, but you won’t succeed in replicating its network. It just can’t be copied, and that is what makes it defensible. This is the case for every successful company in the market – a study even shows that 70% of the overall value in tech companies created on the stock market since 2000 is related to the strength of their networks.

For all of these reasons, AppLovin acquiring MachineZone was an absolute, incredible bargain. Considering that MachineZone was previously valued at $5 billion, we’re not alone in that belief either…

You can read all about mergers and acquisitions in our article here.

How to engineer network effects

All of this is very well and good, but how can you actually create a network effect for your product?

Well the natural first step is to try and design your game so that it becomes more valuable with each user playing it. If it’s an online game where players compete against real people, you’re already doing this. For other genres, adding a multiplayer mode or some kind of social features like chat rooms or player on player powerup support like Candy Crush can work too. Pretty much anything that works on the basis of social networks, AND includes direct interactions between friends and strangers is ideal. These are called direct (or one-sided) network effects.

A marketplace for value exchanging virtual goods works well too, known as two-sided network effects because players give and take from each other. Players trading items directly or even your in-game economy having a stock market-esque system where in demand items grow expensive while others drop are powerful here.

Beyond game design, leveraging network effects in marketing is the next route to creating a solid network. Cross-promotion of your other games in one game is a solid start and builds that company-wide network, as we’ve shown earlier. Otherwise you can advertise your current network as a feature (10,000 active monthly players!), because players see value in that network too.

That is a very quick approach to building a network though. We’ll likely explore this in a standalone article at a future date.

Networks, businesses, and the future

As you can tell, network effects are one of the most important things for a business to attain. Networks are not easy to get, and they’re not suited to every game, but the businesses that master them become absolute giants. There’s a reason Fortnite has made billions of dollars, and it isn’t flossing. Okay, it’s not JUST flossing.

But will network effects always be important?

Definitely. In essence, network effects are the technical term for ‘the rich are getting richer’. However, the loop of big companies getting bigger because it’s easier to acquire users can end if trends change. A rise in worldwide privacy concerns, for example, could make platforms like Facebook unappealing to new users despite its current size. Facebook is seeing some of their worst growth ever, so maybe we’re living in that time now…

We are social creatures though, and our networks were strong in the stone age and they’re valuable in the data age. Companies will always want to keep growing them because they are genuinely that important, but it’s the future of games company networks that’s particularly interesting:

By owning the networks of players in the mobile space, these companies are the closest ones competing for advertiser dollars with tech giants like Facebook and Google. While their market cap is far off, a company like AppLovin can reach 750M users a month. Very few industries outside gaming have the ability to build such a wide network.